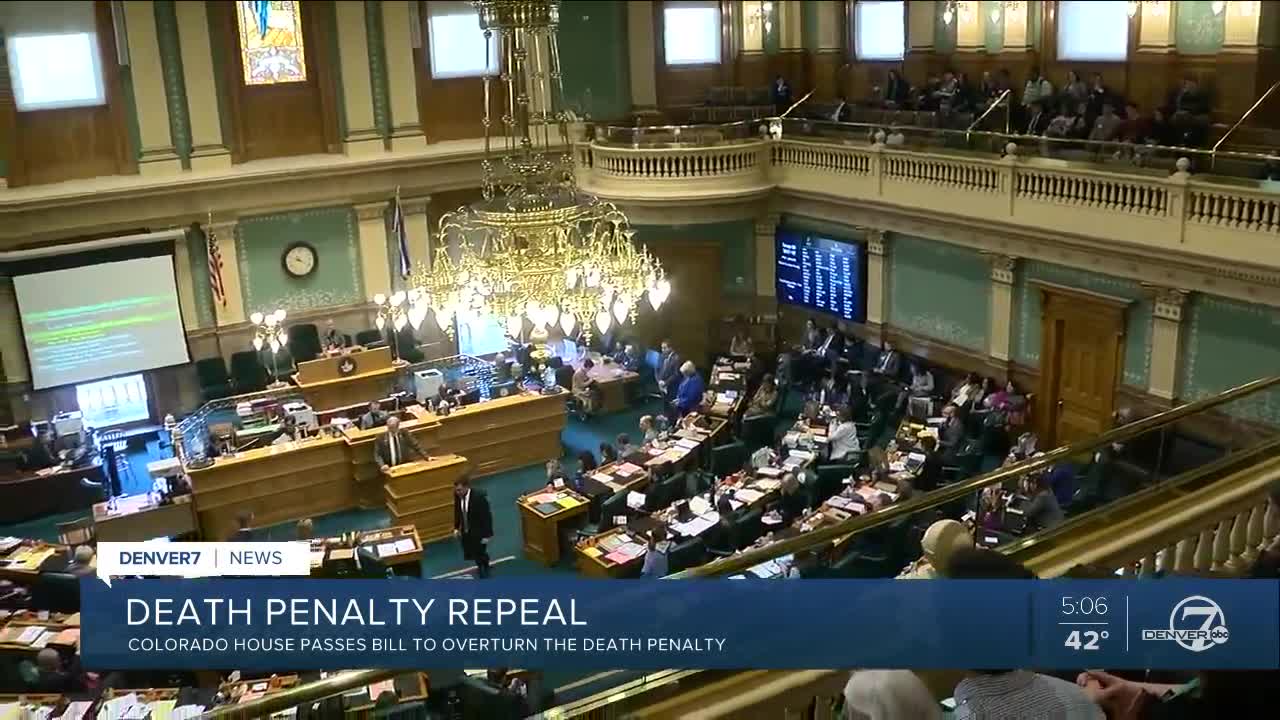 DENVER – The bill to repeal Colorado’s death penalty cleared its final legislative hurdle Wednesday afternoon in a 38-27 vote in the House of Representatives, and the governor’s office says he will sign the measure in what is expected to be one of the most consequential moments of the 2020 legislative session.

The measure passed its third reading Wednesday morning after passing its second reading early Tuesday morning after an 11-hour debate period. There was more than five hours of emotional testimony from lawmakers before the final vote Wednesday. Passage of the bill, HB20-100, was all-but a foregone conclusion after the bill cleared the Senate late last month because of the strong Democratic majority in the House.

Some Republicans — and Democrats — made their final pleas to send the question of whether to repeal the death penalty to voters, as they have sought in prior discussions about the bill. Rep. Tim Geitner again tried to offer an amendment to refer the question to voters — but that attempt failed despite five Democrats voting for it. Rep. Tom Sullivan, a Democrat whose son was killed in the Aurora theater shooting, was also among those who opposed passage of the measure during prior debate this week.

Much of the opposition from lawmakers came because they feel families of murder victims will not get closure if the death penalty is not on the table for the killers.

But many Democrats pointed that there are other options, which they say are more cost-effective, than capital punishment. Rep. Jovan Melton, who represents the district from where all three of Colorado's death row inmates hail, said it was not equitable for that to be the case, and said he supported the measure because it was something he had hoped to accomplish since he first took office. House Speaker KC Becker, D-Boulder, read a statement from her friend and capital punishment attorney Madeline Cohen, who represents one of the state's death row inmates, who said that she supported the efforts to put her out of a job because she felt the system was unjust to those who face the death penalty.

In the end, three Democrats voted against the measure — Reps. Kyle Mullica, Brianna Titone and Tom Sullivan — all of whom said they would be voting "no" during Wednesday's debate. Zero Republicans voted for the measure.

But Democrats hold an advantage in the House and had the votes to pass the bill Wednesday.

Colorado is now the 22nd state to abolish the death penalty.

“Rarely are we asked to decide an issue that is as momentous, impactful, and as hard as this, and I have empathy and understanding for my colleagues who may find a different answer,” House Majority Leader Alec Garnett, D-Denver, said in a statement after the measure’s passage. “I have been humbled and moved by the testimony and debate that we have heard. My hope is for a society where we spend our resources on rehabilitation, not on appeals; on treating drug addictions, and not administering lethal injections.”

The measure repeals the state’s death penalty for any crimes charged by prosecutors on or after July 1, 2020. There are currently three people on Colorado’s death row: Robert Ray, Sir Mario Owens and Nathan Dunlap.

Ray and Owens were convicted of killing Javad Marshall-Fields, the son of Sen. Rhonda Fields, D-Aurora, and Marshall-Fields fiancée in 2005, and Fields’ opposition to the repeal has been a key point of contention in this year’s debate after it caused last year’s repeal measure to fail. New Republican sponsorship in the Senate offset Fields’ opposition to the measure and allowed it to pass the Senate.

The 2020 repeal measure was the sixth attempt by lawmakers in recent years to get rid of the death penalty in Colorado – but the first to succeed.

A spokesperson for Polis confirmed Tuesday night that the governor will sign the bill.

Colorado voters passed a law to reinstate the death penalty in 1974 but it was struck down four years later by the Colorado Supreme Court. But in 1979, the legislature passed another bill reinstating the death penalty, which then-Gov. Dick Lamm allowed to become law without his signature. In 1997, Gary Lee Davis became the last person to be executed in Colorado and the first since Luis Monge in 1967. He was also the only person executed in Colorado to die as a result of lethal injection.

Once the repeal becomes law, anyone convicted of a class 1 felony that is charged after July 1 of this year would automatically face a sentence of life in prison without the possibility of parole.

Gov. Polis has 10 days to sign a bill once it has been received. In a statement last month when the bill was introduced, Gov. Polis’ spokesperson Conor Cahill said the governor would consider “many factors” should lawmakers pass the measure.

“There are currently no clemency requests involving the death penalty before the Governor. All clemency requests are weighty decisions that the Governor will judge on their individual merits," Cahill said. "If the legislature repeals the death penalty, that is one of many factors he would consider along with all of the facts surrounding the case.”