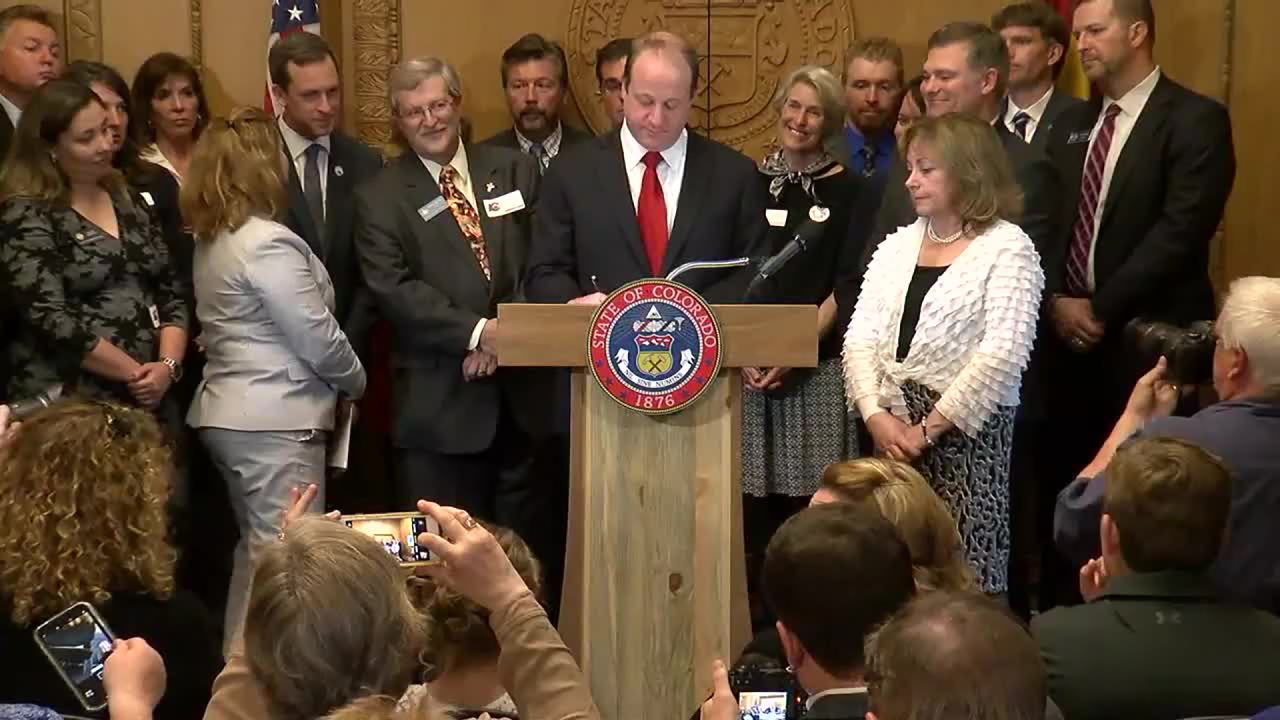 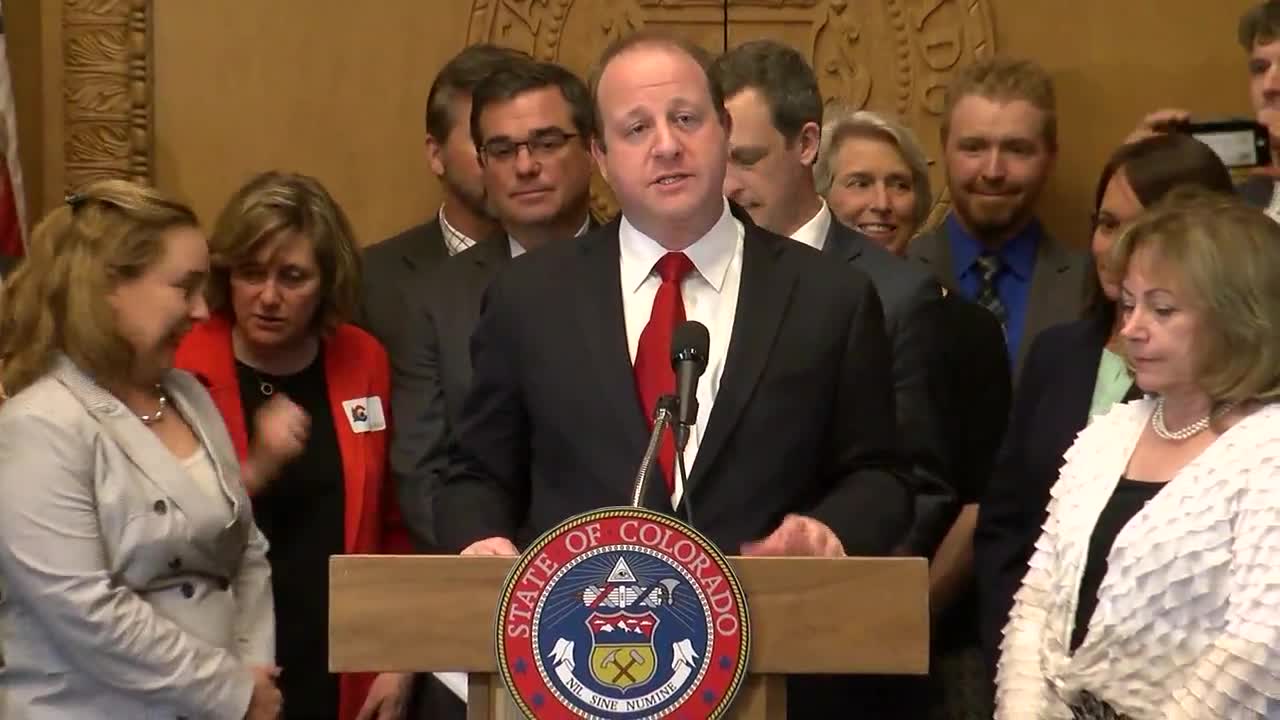 DENVER – Colorado Gov. Jared Polis on Tuesday signed the controversial oil and gas local control bill that has divided some communities, pledging to end the uncertainty surrounding the industry and its work with local governments, and saying that the bill made good on sponsors’ promise to protect the health and safety of the public and environment.

“As we end the oil and gas wars, it’s important to reflect that we are all winners. It might not be everything environmental groups wanted; it might not be everything the oil and gas industry wants,” Polis said before signing SB19-181. “But with the best efforts of the speaker, the majority leader and others, they’ve crafted a pretty darn good bill for Colorado’s future. And I couldn’t be more proud, in just a few moments, to be adding my signature.”

The bill will give local control to municipalities when it comes to approving drilling sites, would prioritize regulation of the $32 billion industry by the Colorado Oil and Gas Conservation Commission and would make the COGCC put public health and safety and the environment first in making decisions about the industry.

The measure received the backing of Erin Martinez, who was severely burned in the April 2017 Firestone explosion and whose husband, Mark Martinez, and brother, Joey Irwin , were killed in the explosion. She joined Polis, bill sponsors, local government officials and industry representatives at Tuesday’s bill signing.

Polis said Tuesday that all of Colorado would win after the bill becomes law, saying political and economic risks facing the industry would be allayed and people living in communities who are concerned about industry development would be comforted by the new rules.

He said he believed there would no doubt be skirmishes surrounding particular projects but said all parties involved would see reduced uncertainty and said the bill came together in a way that will “value all jobs in Colorado.”

Bill sponsor, Senate Majority Leader Steve Fenberg, D-Boulder, praised the work lawmakers and stakeholders did on the measure, saying it was “hard to recall a bill that had that much debate.”

“We compromised, we negotiated, we talked, we amended,” he said. “but there was one thing we weren’t going to compromise on: the health and safety of all Coloradans. From the beginning, that was non-negotiable.”

House Speaker KC Becker, D-Boulder, who also sponsored the bill, said the measure would give the industry a “reasonable” path forward in Colorado and said the bill was long overdue for many.

“We look forward to ensuring our economy continues to work for all and our communities are healthy and safe,” she said.

The industry reacted with mixed emotion to the bill’s signing – both acknowledging the work lawmakers did with the industry as positive and calling the bill the most sweeping to address the industry in Colorado in decades, but also saying it sees threats from the measure.

“SB 181 is the most comprehensive oil and natural gas legislation Colorado has seen in decades,” Colorado Oil and Gas Association spokesperson Scott Prestidge said. “While we appreciated and supported a few critical amendments that were added to address some of our concerns and that provide a degree of certainty for our member companies, we still oppose the legislation.”

But he said, as did other industry stakeholders, that they were looking forward to the regulatory rulemaking process that will follow.

“We are committed to being an engaged stakeholder and constructively working with the governor’s administration to try and get it right,” he added.

Colorado Petroleum Council spokesperson Ben Marter said that the bill “remains a threat” to the industry in Colorado and called it “deeply flawed,” but added that the CPC was also looking forward to working on the regulations and “committed to that process.”

“We are appreciative that legislative leaders heard our concerns and worked with us to begin to address them. Colorado’s energy future is too important to be wielded as a partisan weapon, and all Coloradans deserve to know the consequences of this bill, both intended and unintended.”

Colorado Rising, which backed the Proposition 112 setbacks measure on the 2018 ballot, called the measure “desperately needed.”

“SB-181 is the most substantial shift we have seen in decades and puts communities on much better footing when confronted with industrial oil and gas in their backyard,” spokesperson Anne Lee Foster said in a statement.

Boulder County commissioners praised Polis for signing the measure and said it made its own local regulations stronger. The county has fought certain development inside its boundaries for years.

“Scrutinizing oil and gas development through a different lens that prioritizes the protection of people and the environment, and holding operators to higher standards, will allow for better outcomes that safeguard Coloradans,” the board said in a statement.

But the government of Weld County, a bastion of the industry in Colorado, was less than pleased and sent an open letter to its residents describing how it says they will be “negatively impacted.”

“Disappointed? Yes. Angry? Absolutely. Surprised? Not at all. If the Governor and the Boulder Legislators thought Weld County would be silenced or minimalized, if they thought we wouldn’t speak up in support of our families, we just have one thing to say: talking heads and photo ops at the Capital [sic] will never overshadow those with boots on the ground in Weld County,” the letter said.

The county government said county commissioners would publicly pledge their support for oil and gas industry workers at next Monday’s board meeting.

“As County Commissioners, we stand firmly behind the families employed by the oil and gas industry as we are grateful for the work you do,” the letter said. “For months, you have endured misleading allegations that the industry isn’t doing all it can to protect life, safety and the environment as if it wasn’t your life, your safety and your environment as well.”

The next steps now that the bill has been signed involves the rulemaking process and the Colorado Oil and Gas Conservation Commission.

Part of that process will be determining how the COGCC director may delay final determination on permits -- something that was changed in the amendment process at the request of the industry.