Final rule was announced at end of March 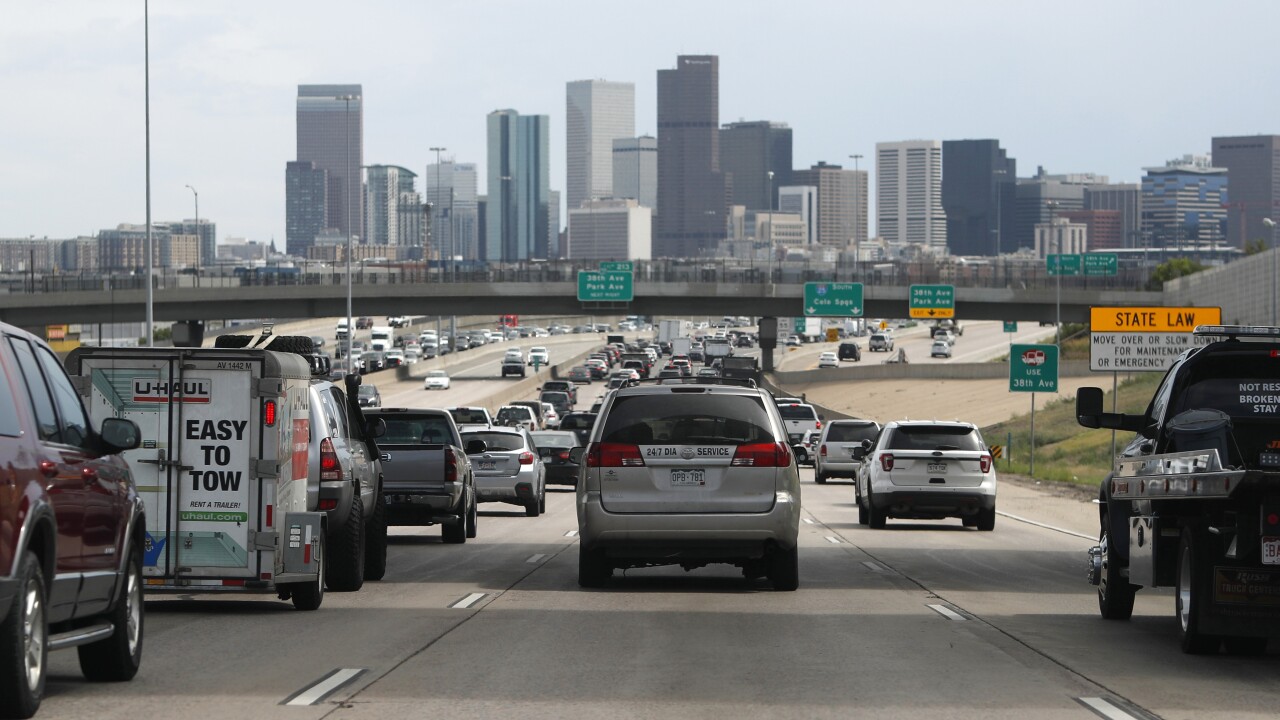 (Copyright 2020 The Associated Press. All rights reserved. This material may not be published, broadcast, rewritten or redistributed.)
David Zalubowski/AP
FILE - In this Thursday, July 11, 2019, file photograph, southbound Interstate 25 traffic lanes bog down to a crawl at the interchange with Interstate 70 just north of downtown Denver. On Friday, Sept. 6, 2019, the U.S. Environmental Protection Agency held a hearing to decide whether to lower the ozone status of Denver and eight other northern Colorado counties from "moderate" to "serious," a move that would force the state to take action to clean the air but which businesses have voiced objections over meeting any possible regulatory changes. (AP Photo/David Zalubowski, File)

DENVER – Colorado and Denver are part of a lawsuit filed Wednesday by more than two dozen states and cities against the Trump administration’s rule change that rolls back a policy aimed at improving fuel efficiency in new vehicles and reducing carbon emissions.

The state and city are among 28 states and cities suing the Environmental Protection Agency, U.S. Department of Transportation and National Highway Traffic Safety Administration about the rule change, which was finalized in late March and which Colorado Attorney General Phil Weiser said at the time he planned to challenge.

The lawsuit was filed in U.S. District Court in Washington D.C. The states and cities are asking the court to review the rule changes.

But the finalized rule requires only a 1.5% yearly increase in those fuel efficiency standards – not the 5% annually that had been in place since the Obama administration for model years 2017-25. Colorado officials said the 1.5% rule is lower than average annual increases seen since the George W. Bush administration.

“Climate change is not a theoretical, looming challenge,” Weiser said in a conference call announcing the lawsuit Wednesday morning.

He said future generations would “ask why we weren’t more vigilant” in protecting the climate and said that the lawsuit showed Colorado was “being vigilant today.”

Weiser, along with California Attorney General Xavier Becerra and Michigan Attorney General Dana Nessel, said they believe that the Obama-era rules were working and that automakers were abiding by them.

Weiser said the EPA has acted “in willful disregard to health” and that it would now be the job of the courts “to get the EPA on track.”

The lawsuit argues that the rule finalized in March violates the Clean Air Act, Energy Policy and Conservation Act and the Administrative Procedure Act.

The attorneys general on Wednesday’s call said they felt that the administration hadn’t listened to its own scientists regarding the rollback and that they felt more data could come out that would back up those sentiments.

Last week, The Washington Post reported that the administration ignored warnings from scientists that the rule change had flaws. Becerra said Wednesday that he felt the administration had been doing similar things throughout its tenure, which led to other lawsuits from California and some of the states who joined the lawsuit filed Wednesday.

Nessel said she had been in talks with the Big Three automakers, whom she believes feel hesitant to push back on the rule change to as not to upset the president or the federal government, which she said was displaying “erratic behavior.”

She said the automakers want a sense of being able to predict what’s going on in coming years but that she believed they were not going to intervene on the states’ behalves in order to not disturb the president.

“No one affiliated with those companies wants to wake up and see themselves on the wrong end of a mean tweet by President Trump,” she said.

Denver officials said that the rule would hurt the city’s economy and public health.

“Vehicle emissions are one of the top contributors to climate change and air pollution in Denver, harming our community’s health and prosperity. If these rules are rolled back, the Trump administration will negate the progress that has happened across the country in these areas during a critical point in history,” Mayor Hancock said. “We are past due for our country taking more meaningful action, which is why Denver joined this important lawsuit.”

Colorado has already approved a zero-emissions vehicle rule last year to try to cut back on emissions in the state and increase the number of electric and hybrid vehicles sold at dealerships in the state. And state officials said last year they would challenge the administration's blocking states like California and Colorado from setting their own standards.

Weiser said the challenge to the rule would be key to keeping those initiatives on track.

“The administration’s illegal rollback rejects sound science, ignores environmental harms caused by carbon pollution, and will cost consumers more at the pump. Colorado is joining this lawsuit challenging the administration’s illegal action in order to defend our state’s fuel emission standards that are stronger than the national standards,” he said. “By making more zero-emission vehicles available to Coloradans, we can address climate change and protect our air quality.”

The Trump administration argues that the rule will increase competitiveness and boost vehicle sales, though the attorneys general argue they will prove that is not the case.