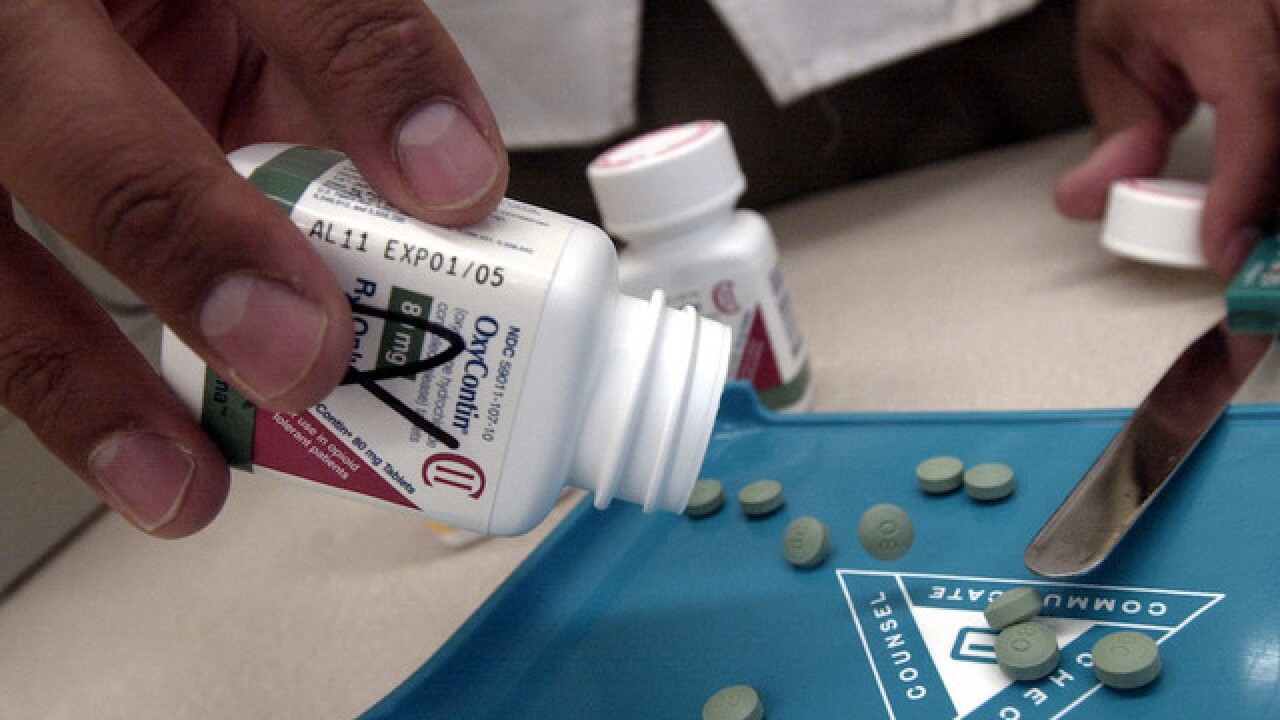 Copyright Getty Images
Darren McCollester
<p>393517 01: The prescription medicine OxyContin is displayed August 21, 2001 at a Walgreens drugstore in Brookline, MA. The powerful painkiller, manufactured to relieve the pain of seriously ill people, is being used by some addicts to achieve a high similar to a heroin rush. Its popularity among abusers of the drug has resulted in a string of pharmacy robberies nationwide. Armed robbers raid the pharmacies for the painkiller which has a street value of $40 for a 40mg pill. (Photo by Darren McCollester/Getty Images)</p>

DENVER – Colorado’s attorney general has filed an amended lawsuit against opioid manufacturer Purdue Pharma, former executives and the Sackler family, which owns the pharmaceutical company, for their roles in the opioid epidemic – but the complaint remains under seal because of a confidentiality agreement.

The new filing made by Attorney General Phil Weiser, a Democrat, was made in Denver District Court and expands on the lawsuit filed last September by former Attorney General Cynthia Coffman, a Republican.

But the exact details of the new filing are not publicly available because the amended complaint had to be filed under seal due to the confidentiality agreement, which the attorney general’s office says it has asked the Denver District Court to unseal “because the public interest far outweighs any of Purdue’s privacy concerns,” according to the office.

But according to the office, the amended lawsuit expands on the already-lengthy one filed last year, which outlined the history of opioid sales in the state and the effect the Purdue-produced OxyContin has on Coloradans.

The original suit claimed that sales representatives for the company encouraged doctors for years to prescribe higher doses of OxyContin and that the company downplayed addiction risks.

Data from the Colorado Department of Public Health and Environment show almost 4,500 people died from opioid-related overdoses between 2000 and 2018 in Colorado, and another roughly 700 died from synthetic opioids.

Purdue and the Sackler family face lawsuits from dozens of states and local municipalities, including some in Colorado, over the opioid crisis in America.

According to Weiser, the amended complaint alleges that the company and family pushed studies with misleading information about long-term effects of their products and worked to undermine the trust of doctors and nurses in alternative painkillers.

It also alleges they made up a medical condition to sell more of their products and maintained a list of Colorado providers that prescribed the most opioids, then pushed those providers to prescribe even more of the opioids.

Weiser’s office says almost 1 in 10 of those top prescribers were later disciplined over the practice.

“Opioid addiction affects all Coloradans and poses a serious threat to the state’s public health, safety, and economy. Purdue Pharma, executives of the company, and the Sackler family worked together to create, fuel, and profit from the crisis we are dealing with today,” Weiser said in a news release.

He said that the state’s work to address the opioid crisis would continue. Overdose deaths fell slightly statewide in 2018 from the year prior, but it was still the second-deadliest year for overdose deaths on record.

“While we fight in court to hold those responsible who created and fueled the opioid epidemic, we’ll also support the development of new treatment alternatives and work to improve access to treatment, particularly in rural parts of the state that lack sufficient options. This is a statewide challenge that requires a statewide response,” Weiser added.

In a statement Monday, a Purdue Pharma spokesman said the company denied the claims and said a North Dakota case similar to Colorado's was recently dismissed.

“Purdue Pharma vigorously denies the allegations contained in litigation against the company and will continue to defend itself against these misleading attacks,” the spokesman said. “These sensationalized claims are part of a continuing effort to try these cases in the court of public opinion rather than the justice system, as plaintiffs are unable to connect the conduct alleged to the harm described. Instead, they have invented stunningly overbroad legal theories, which if adopted by courts, will undermine the bedrock legal principle of causation.”

“The recent decision by the North Dakota Court to dismiss all the claims filed by the Attorney General of North Dakota against Purdue is a significant legal victory for the Company that has potential far-reaching ramifications for both the state lawsuits and the claims pending in the multi-district litigation (MDL).”

The spokesman, Robert Josephson, said the company “is deeply concerned about the impact of opioid abuse and addiction on families and community across the country.”