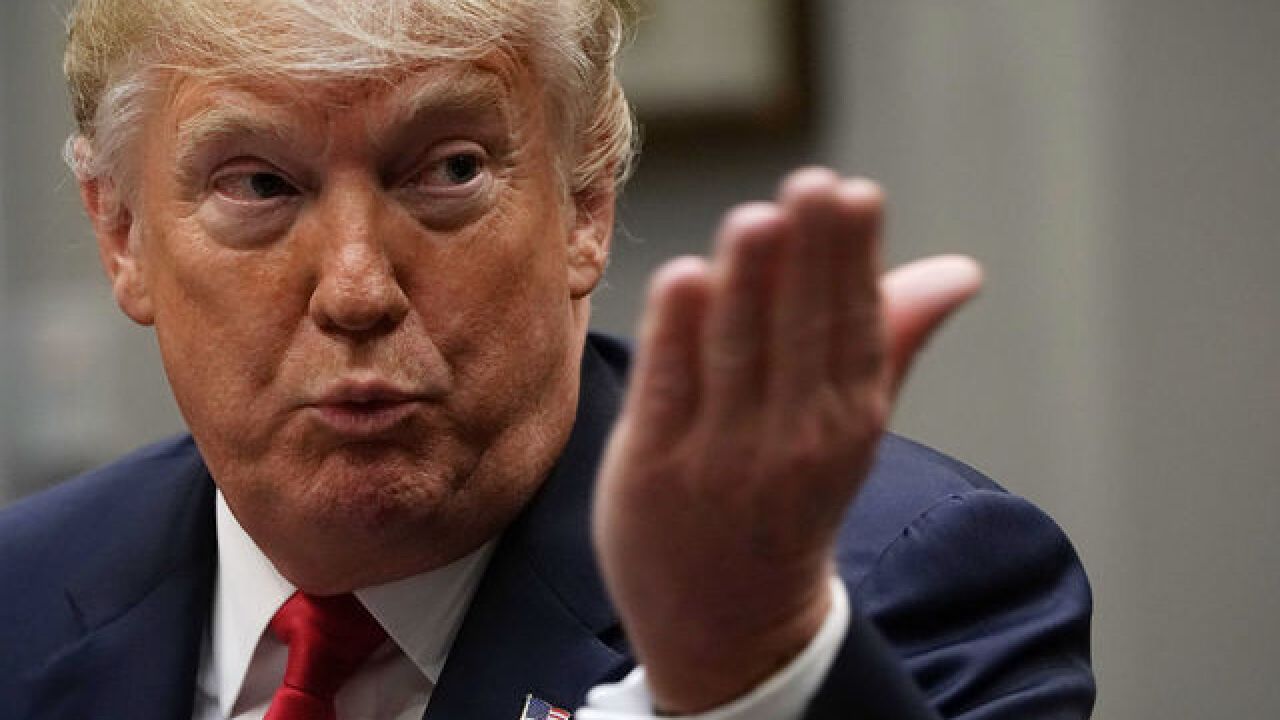 2018 Getty Images
Alex Wong
<p>WASHINGTON, DC - AUGUST 29: U.S. President Donald Trump speaks during an announcement of a grant for a drug-free community support program at the Roosevelt Room of the White House August 29, 2018 in Washington, DC. According to the WhiteHouse.gov website, "the DFC Program provides grants to community coalitions to strengthen the infrastructure among local partners to create and sustain a reduction in local youth substance use." (Photo by Alex Wong/Getty Images)</p>

DENVER – U.S. Sen. Michael Bennet on Thursday sent a scathing letter to the White House’s Office of National Drug Control Policy urging the administration to reconsider its quest to gather negative data about legal marijuana programs, like the one in Colorado.

The letter comes a day after BuzzFeed News reported that the White House and the Office of National Drug Control Policy had created the “Marijuana Policy Coordination Committee,” which has asked more than a dozen federal agencies and the Drug Enforcement Administration to submit stories and data about the “threats” marijuana poses to the U.S.

“Departments should provide … the most significant data demonstrating negative trends, with a statement describing the implications of such trends,” reads a memo from the White House sent to several agencies earlier this summer, which was obtained by BuzzFeed News.

Another committee document obtained by BuzzFeed News says that “staff believe that if the administration is to turn the tide on increasing marijuana use there is an urgent need to message the facts about the negative impacts of marijuana use, production, and trafficking on national health, safety, and security.”

The Trump administration’s dealings with marijuana and the Colorado congressional delegation’s involvement in trying to protect the state’s recreational and medical programs has been an ongoing saga since U.S. Attorney General Jeff Sessions rescinded the Cole Memo in January.

In his letter Thursday to James Carroll, the acting director of the Office of National Drug Control Policy, Bennet said that Trump and his administration “has further eroded any credibility it had on the issue” and that the committee’s work would “further contribute to the Administration’s incoherent and backward-looking policy on marijuana enforcement and regulation.”

“At a time when we should be investing in objective and peer-reviewed scientific research on marijuana and the effects of legalization, the White House is instead using taxpayer money to spread a politically-driven narrative,” Bennet wrote. “What’s perhaps most unfortunate is that my state and others stand ready to work as partners with the federal government to gather the data and research necessary to ensure we are protecting public health and safety.”

The Colorado Democrat said he hoped the administration “re-consider” its efforts and look at “conclusions that are fully grounded in peer-reviewed science.”

Bennet’s fellow senator from Colorado, Republican Sen. Cory Gardner, introduced the STATES Act in early June after several discussions with Trump and Sessions, among others. The states’ rights marijuana bill would change federal code to ensure that legal marijuana programs that comply with a basic series of rules stay intact.

At the time, Trump said he was “looking at” the measure. “But I probably will end up supporting that, yes,” Trump said.

On Wednesday, Gardner’s spokesman, Alex Siciliano, said that despite the BuzzFeed News report, the senator was taking Trump at his word regarding what he said earlier this summer.

“Forty-seven states have now acted in a way that is contrary to the Controlled Substances Act and there are more initiatives on the ballot this year. Whatever their decision, these states ought to be respected,” Siciliano said in a statement to Denver7. “Regardless of the accuracy of the story, Senator Gardner remains confident in the commitment the President made to him to support a states’ right solution to the current disconnect on marijuana law.”

Siciliano pointed to several stories in which Trump or his deputies said Trump was committed to states’ rights regarding marijuana. Neither the White House, DEA nor the 14 agencies contacted by BuzzFeed News for its story denied the existence of the committee.

Two Democratic congressmen from Colorado said the administration’s data collection was harmful. Reps. Ed Perlmutter and Jared Polis are both cosponsors of the Marijuana Data Collection Act, which would order the National Academy of Sciences to study the health, safety and economic effects of state marijuana programs.

“The lack of research on cannabis has led to unsubstantiated information coming from a variety of sources,” said Rep. Ed Perlmutter, D-Colo. “We need data-driven, verified information about the impacts of cannabis in order to be fully informed and legislate appropriately on this issue.”

Polis said it is time for Congress to pass measures, such as the STATES Act or his Regulate Marijuana Like Alcohol Act, which currently has 26 cosponsors, to shore up state protections.

“Pres. Trump is flailing on marijuana policy, sometimes saying the states should decide, while also allowing the Attorney General and other prohibition supporters in his purview to run amuck,” Polis said in a statement. “If the White House is actually spreading misinformation about marijuana to undercut states’ rights, it’s appalling but not out of the ordinary for his gang of prohibition supporters.”

New data from the state on marijuana use show the share of Colorado children using marijuana stayed flat again in 2017 and hadn’t increased since recreation marijuana was legalized. Adult use rates increased by about 2 percent in 2017 from the year before.