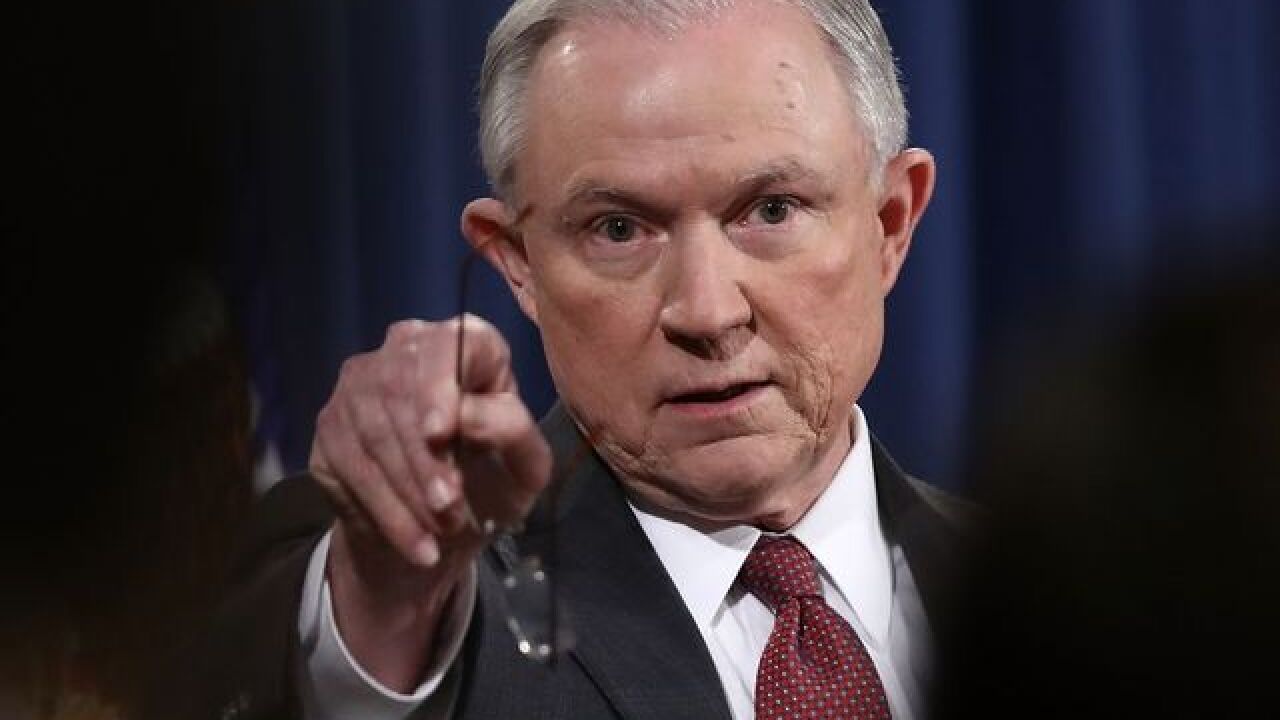 DENVER — The threat of the loss of federal funding loomed over county, city and state governments Monday as Attorney General Jeff Sessions called upon governments to work in full cooperation with new immigration directives.

The Department of Justice will issue over $4.1 billion in federal grants to cities, counties and state governments to aid in law enforcement efforts in 2017, but only to jurisdictions in full compliance with new directives made by President Donald Trump and laws currently on the books.

Sessions even went so far as to claim the federal government would go to court to take back grants issued to cities and other municipalities that prove they won't enforce directives.

"The Department of Justice will also take all lawful steps to claw back any funds awarded to a jurisdiction that willfully violates (8-USC 1373)."

U.S. Code 1373 was put in the books in 2001 and requires communication between local authorities and immigration authorities like Immigrations and Customs Enforcement (ICE).

Sessions led off his Monday press briefing by speaking directly to a case he said violates immigration policy -- that of Ever Valles, a suspected gunman accused of murdering a 32-year-old at Denver's Sheridan light rail station.

"Valles was released from the Denver jail in late December despite the fact that ICE had lodged a detainer for his removal. The American people are not happy with these results," Sessions said.

Valles, a Mexican national, was formally charged in February after police identified him as a suspect in the robbery and shooting. He faces first-degree murder, robbery and gun charges.

Valles's first arrest was in October 2016, but was released in late December after posting a $5,000 bond. Police notified ICE about the release in the face of an ICE detainer.

Shawn Neudauer, an ICE spokesperson, said the notification came too late — an hour after Valles was released.

The alleged shooting followed just weeks after his release, although he was still on police radar and probation.

Communication and detention are points of contention between local police and immigration agencies, with the title of sanctuary city being thrown around on both sides.

Sessions threatened to strip federal funding to sanctuary cities, but he included those that don't follow all ICE requests, such as federal detainers which ask to hold suspects in police custody beyond their sentences or allotted time for questioning. Police say in most cases, they're following the law.

In Colorado, only Boulder has declared its status as a sanctuary city, but it only receives $8 million in federal funding — and received just under $150,000 in 2015, which the city says all goes to law enforcement programs.

"President Trump, in his executive order earlier this year, indicated that he did not intend for law enforcement programs to lose funding, and it is unclear whether the remarks made by Attorney General Sessions change this directive," a statement from the city of Boulder said. "If they do, the city will carefully examine the programs supported by this funding and make a determination about whether they can continue through alternate means."

"Boulder City Council members, in voting to protect the rights of immigrants in our community, were aware there could be budgetary consequences," the statement continued. "Nonetheless, they chose to align themselves with the values and principles expressed by other sanctuary cities in this country."

Other cities, including Denver where Valles was released, shirk sanctuary city status.

"We follow federal laws, we still cooperate with federal agencies and ICE. What we won't do is do anything unlawful or unconstitutional," Denver Mayor Michael Hancock said.

He followed by saying Denver has never adopted a policy or declaration similar to Boulder.
“Denver never adopted a formal policy to be a sanctuary city," Hancock said. "What we are is a very welcoming and inclusive city.”
Aurora has also been mentioned in the sanctuary city talk, with the Chief of Police Nick Metz saying they won't round up illegal immigrants or act beyond their means.
"The city's responsibility is to provide services to all residents, enforce local laws and build strong community partnerships," Metz said amid concern over increased immigration enforcement.
Metz added the city will not "investigate, enforce, or detain solely for immigration status."
Aurora as a city, however, has never declared it will not follow laws on the books, showing sanctuary status is a gray area at best.
But its city council was concerned enough that it met to discuss the issue Monday. City leaders said they don't want to break the law, but want everyone to feel welcome in the city.
"They're hearing so many different thing right now that they don't know what to believe," Metz said. "We don't want to create this huge divide between ourselves and the immigrant community."

"I have not in 20 years seen a case where somebody used a Bible to desecrate another faith's place of worship," said Corey Saylor, of CAIR. He knows what happened here isn't isolated.

Soon-to-be-released data will reveal a more-than 50 percent jump in 2016 in anti-Muslim cases from the previous year.

"A sanctuary city or state has no precise definition. Here in Colorado we embrace our immigrant and refugee communities, and we are committed to protecting the legal rights of all who live here. We share Sessions' priority for the safety of our communities. However, we believe this action could make our communities less safe by cutting funds to local law enforcement. We remain supportive of efforts to secure borders, which includes deporting undocumented immigrants who have committed serious crimes. This conversation is another example of the need for Congress to step up and provide comprehensive immigration reform."

The federal government made its stance clear on Monday, however: fall in line.
"Today I'm urging state and local jurisdictions to comply with these federal laws. Moreover, the DoJ will require that jurisdictions seeking or applying for DoJ grants, certify compliance with 1373 as a condition of receiving those awards."
Sessions cited a Department of Homeland Security report detailing 200 instances of jurisdictions refusing to honor ICE detainers with respect to suspects who are charged or suspected of a crime in a single week.
Colorado, however, has seen a fair share of deportations and removals. Syracuse University's TRAC tool shows that through February of 2017 alone, 80 people have left Colorado voluntarily after investigation and 334 people have been removed from the state by immigration authorities.
Sessions called for collaboration between cities and authorities, pointing back to the families of those lost, like Tim Cruz, who died at a Colorado light rail station in February.

"DUIs, assaults, burglaries, drug crimes, gang rapes, crimes against children and murderers. Countless Americans would be alive today and countless loved ones would not be grieving today if these polices of sanctuary cities were ended."