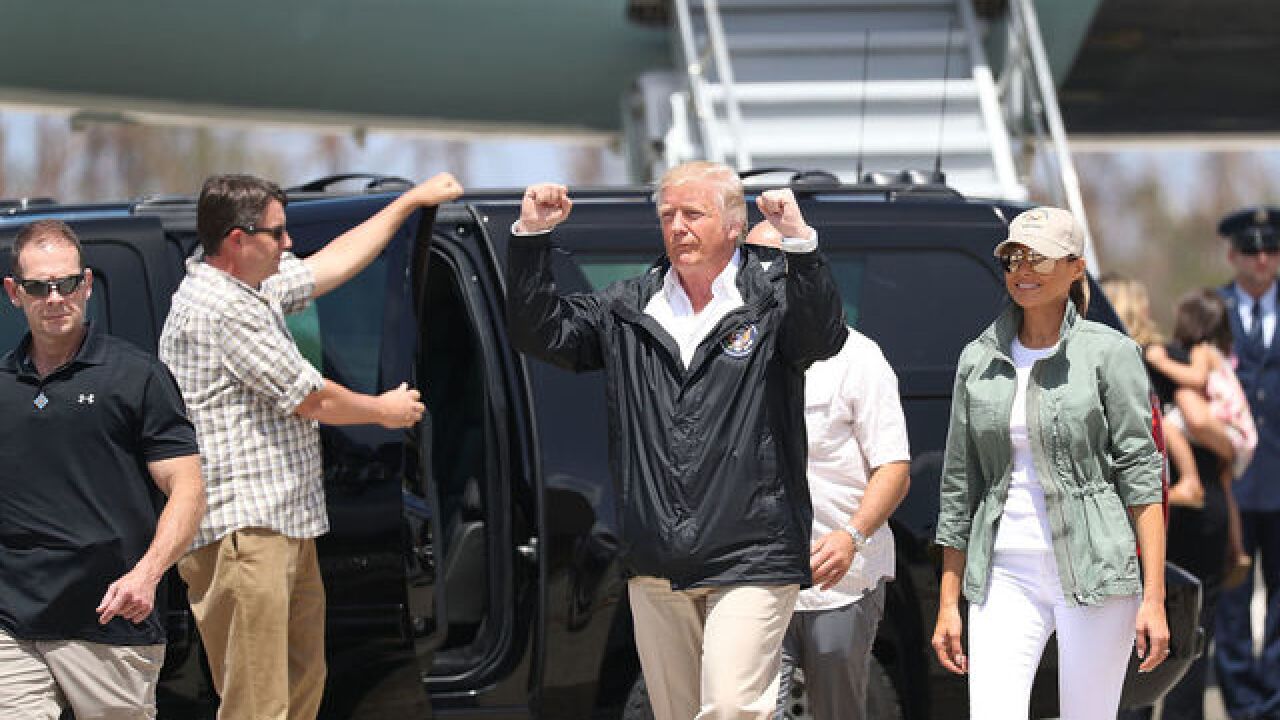 2017 Getty Images
Joe Raedle
<p>CAROLINA, PUERTO RICO - OCTOBER 03: President Donald Trump and Melania Trump arrive on Air Force One at the Muniz Air National Guard Base for a visit after Hurricane Maria hit the island on October 3, 2017 in Carolina, Puerto Rico. The President has been criticized by some that say the government's response has been inadequate. (Photo by Joe Raedle/Getty Images)</p>

DENVER – President Trump’s Thursday morning tweets in which he falsely blamed Democrats for inflating the death toll in Puerto Rico from Hurricane Maria and claimed it wasn’t as high as a scientific review recently found ruffled the feathers of some of Colorado’s congressional delegation, though several members also sat silent in response.

An independent investigation by public health experts released late last month found an estimated 2,975 people died before and after last year’s hurricane as a result of the storm and the repercussions that followed.

But Trump tweeted Thursday that since when he left the island only up to 18 people had been reported dead, that the larger numbers that have recently been released were a ploy by his political opponents to smear him—a common defense of the president’s.

“This was done by the Democrats in order to make me look as bad as possible when I was successfully raising Billions of Dollars to help rebuild Puerto Rico,” Trump said.

The latest conspiracy theory floated by the president comes as Hurricane Florence bears down on the Carolinas and threatens to swamp several eastern states. And it did not go over well with most of Colorado’s members of Congress who responded to questions about Trump’s latest baseless tweets.

Two Republicans said they disagreed with the president’s characterization: Rep. Mike Coffman, R-Colo., who faces a tough challenge from Democrat Jason Crow in his district in November, and Sen. Cory Gardner, R-Colo., who chairs the National Republican Senatorial Committee, which is tasked with keeping Republicans in charge of the Senate this November.

“No Senator Gardner doesn’t share that view that was reflected in the tweet. Senator Gardner’s position on Puerto Rico is clear,” Contres said. “He’d absolutely look at more efforts to improve the situation there if they would accomplish that goal—be it assessment of damage, additional clean-up efforts, etc.”

Contres noted that Gardner visited Puerto Rico shortly after Hurricane Maria and Hurricane Irma hit the island, urged the Department of Energy to help restore power, and had helped Coloradans get in touch with family members living on the island.

“Senator Gardner will continue working with his colleagues in Congress to support recovery efforts for Puerto Rico to ensure the island is prepared in the event they are faced with a similar disaster in the future,” Contres added.

Sen. Michael Bennet, D-Colo., meanwhile called for the Department of Homeland Security’s Office of Inspector General to further investigate the study that estimated the death toll in Puerto Rico and praised the press for pushing for answers. Bennet also tweeted a picture of the famous instance in which Trump tossed paper towels to Puerto Ricans as he visited.

“This is how @realDonaldTrump responds to a hurricane,” Bennet tweeted. “Several reports have laid bare the incompetence of his reaction to Hurricane Maria. We’ve already faced enormous tragedy in Puerto Rico. We cannot repeat this.”

“Nearly 3000 Americans died in #PuertoRico and #USVI, but #Trump chooses to belittle this tragedy I saw firsthand,” she tweeted. “He should be working with Congress to strengthen #Maria rebuilding efforts and prevent future failures. Instead he insults the memory of the storm’s victims.”

“President’s Trump denial of the true loss of life and the pain incurred by Americans in Puerto Rico is offensive and shameful. The most recent death toll of nearly 3,000 lives lost comes from an academic and scientifically-validated report and shows that the incompetent disaster response by the Trump Administration was even more damaging than first reported,” he said in a statement to Denver7. “For President Trump to use the issue of American deaths and disaster response for political purposes is yet another indication that he puts politics over country and he will stop at nothing to try and distort the truth.”

Rep. Jared Polis, D-Colo., was traveling Thursday, a spokeswoman said, and sent a statement in the afternoon in which he backed the researchers.

"Scientists at George Washington University and Harvard have concluded that the death toll from Hurricane Maria far exceeds what President Trump claims on Twitter," Polis said. "The truth speaks for itself. We must defend truth and facts and offer our fellow Americans in Puerto Rico the support they need as they continue to recover."

The president’s comments Thursday morning came just two days after he called his response to post-hurricane Puerto Rico an “unsung success” and said he thought it was “one of the best jobs that’s ever been done.”