"This big, crazy thing": A Colorado man's mission to save his town's century-old caboose 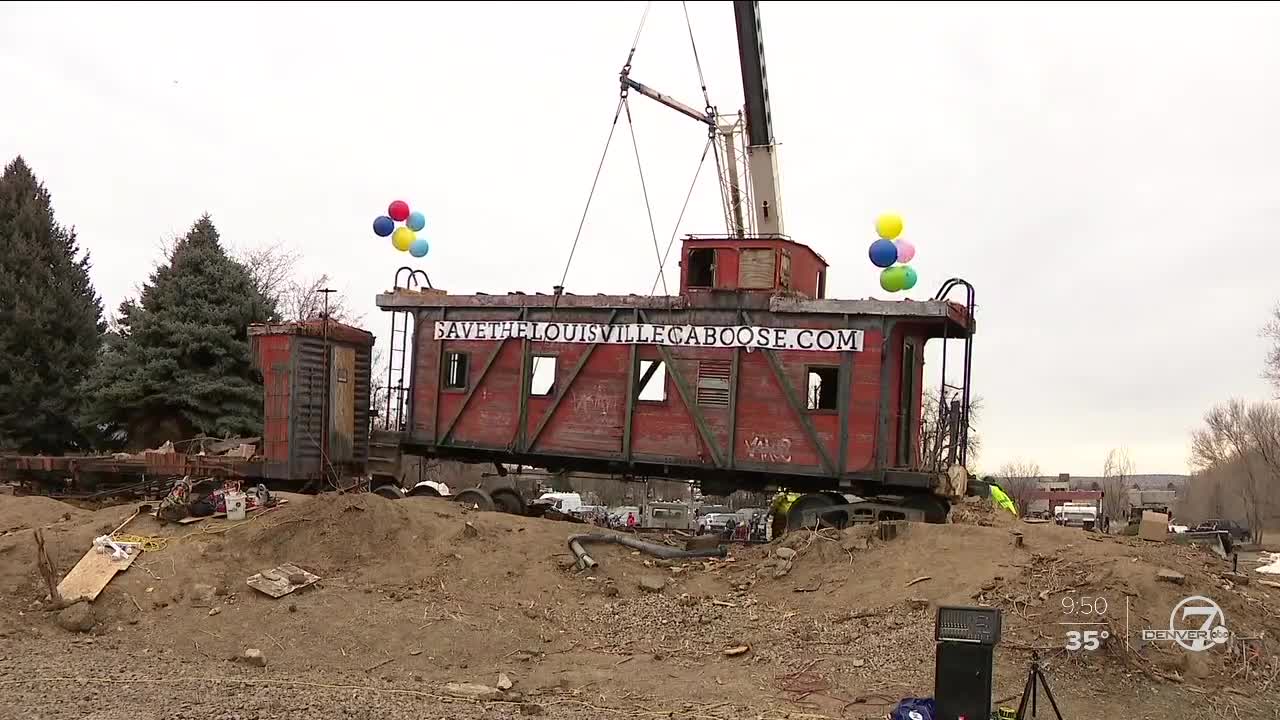 Travis Ramos saw his town's century-old caboose and thought it was worth saving. 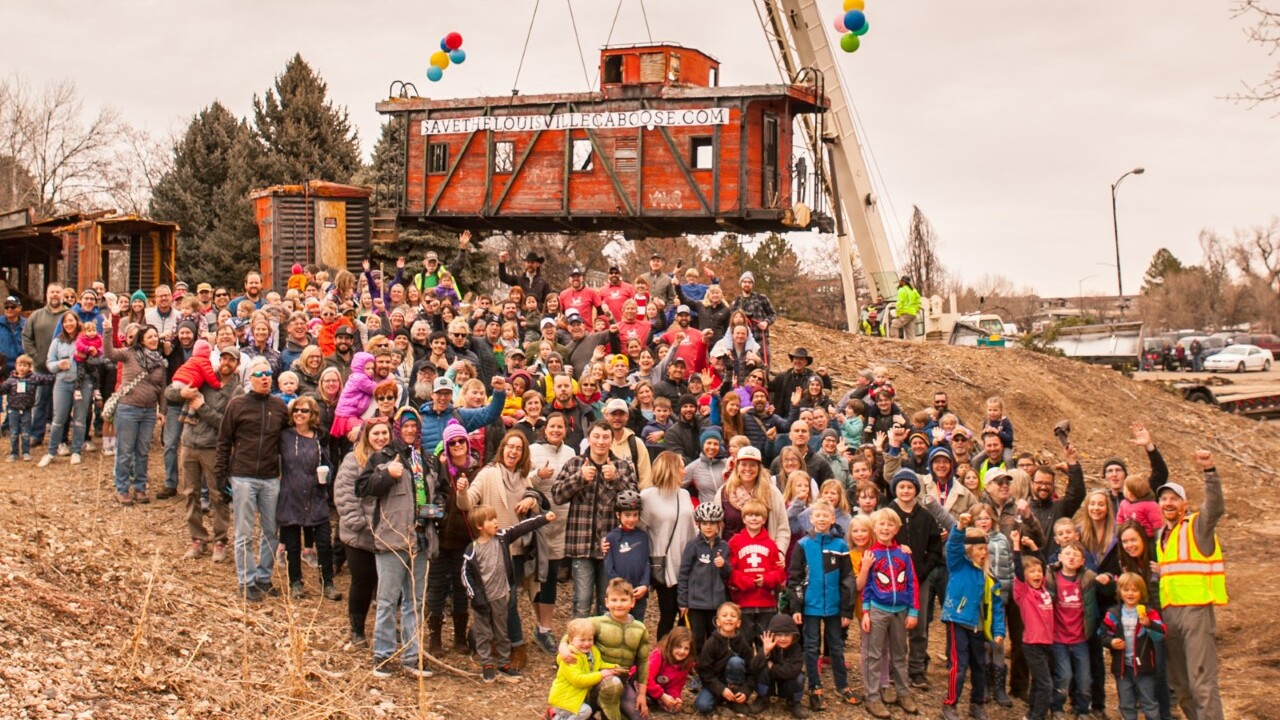 LOUISVILLE, Colo. — Travis Ramos knew his way around a junker.

In college he picked through salvage yards and pulled sunken old cars from the ground. The body and the bolts would be rusted. A tree might be growing through the back bumper. But after Ramos hauled away his prize, he would transform a lifeless vehicle into a vintage classic.

Ramos' past handiwork, though, could only prepare him so much for his latest undertaking: Saving a century-old, 45,000-pound train caboose from impending doom in downtown Louisville.

The land owner along South Boulder Road had planned to demolish the decrepit Rock Island train car, and the ruins of the long-gone restaurant built around it. Then Ramos strolled by the property one day last fall and read the demolition notice. He looked at the caboose — its wood rotting, an entire wall missing on one side — and saw a piece of history worth keeping.

"Our town is important to us," said Ramos, a Louisville resident with his wife, Laura, and their three young children. "And not losing that history is important, because I feel like you see it over and over. I grew up in a small town in Oklahoma, and you see big business comes in, box stores, whatever it might be — and you kind of see a small town die."

So the property owner made Ramos a deal. If he could find a way to move the caboose before the demolition date, then have at it.

Ramos raised money for a crane and other supplies and worked with his sons to prep the caboose for removal. He would be welding a beam or inspecting planks of Douglas fir or shoveling raccoon feces from the roof, and he'd often ask himself the same question: What am I doing here?

The question came to Ramos again on a recent Saturday, even after the crane had lifted the caboose onto a flatbed trailer. Ramos worried the load might not clear the city stoplights, so he hopped on top and rode along.

"It was like caboose cowboy," Ramos said. "I should have had a cowboy hat. I'm literally on top of this caboose, going between stoplights that are level with my head."

The caboose reached its destination safely, a property in eastern Boulder County, and Ramos helped wrangle it to the ground.

Saving the caboose from demolition was just the first step. Now Ramos, who works full-time in marketing, has to figure out how to refurbish the train car. He wants to return the caboose to downtown Louisville, where he could see it becoming a coffee or donut shop or even a small visitor's center, something people can walk inside of and experience Louisville's history of railroad.

But for Ramos, the project was more than a restoration, more than just saving a slice of a growing suburb.

'If only things could be like they used to be'

Ramos grew up in what he called "afterglow" of a life his family used to have.

The accident happened in 1981, shortly before Ramos was born. His uncle, two of his aunts, one aunt's newborn baby daughter and one of their friends were driving to visit Ramos' family when they struck another vehicle head-on. Everyone but Ramos' uncle died in the crash. His uncle suffered permanent brain damage and lived with Ramos' family after the accident.

The tragedy left a young Ramos yearning for a past he never knew.

He listened to stories from his uncle about the glory days, back to "a time when he wasn't broken," Ramos said, and his interests gravitated toward history and searching for the way things used to be. He and his mother explored abandoned houses and Ramos later shot a photography project about the death of the Old West.

"For me, I was kind of born into, and kind of grew up with this line of thinking that everything that had come before, was better," Ramos said. "If only things could be like they used to be, then all would be right with the world."

When he began restoring old cars, he relished in reviving something that had been dead for decades.

"The thing was a brick," Ramos said, remembering one project. "To work on it to the point where new life is breathed into it — that moment when it fires up, it's this tangible thing. The motor runs. Even driving it 10 feet, seeing something that hasn't moved, that was left for dead, and bringing it back — there's just magic in it."

The "train to nowhere"

Like the abandoned cars Ramos pulled from the fields, the Rock Island caboose had a story, too.

It likely began somewhere around 1915, when a line 40-ton, Class B-2 boxcars was built for the Chicago, Rock Island and Pacific Railroad company,according to the Oklahoma Railway Museum. The museum acquired a Rock Island caboose that appears to be identical to the abandoned caboose in Louisville.

Rock Island in the 1940s converted some of the boxcars to cabooses, the cabin car used for crewmembers at the end of a train. The role of the caboose crew was simple: Watch for smoke. At a time when train cars were built from wood, a spark could cause a fire. It was the caboose crew's responsibility watch for smoke and prevent a fire before it got out of hand.

The caboose on display at the Oklahoma Railway Museum was in service into the 1970s, when many cabooses were taken out of operation.

Around that same time is when a Rock Island caboose ended up in Louisville.

Developers in 1969 had purchased land in the 1000 block of East South Boulder Road, along the railroad tracks, and dubbed the property Coal Creek Station, according to information from the City of Louisville. The developers came up with the idea for a train-themed restaurant and began checking around for old train cars.

Clifford Brock, who owned the property with his mother, Eva Brock, and William Arnold, ended up buying four boxcars from the Colorado Southern Railroad and the caboose from the Santa Fe Railway. The caboose, according to the city's account, arrived on a flatbed truck.

Brock insulated the train cars and connected them to a new two-story building, which included a kitchen and a walk-in cooler. In late 1972, the Gandy Dancer restaurant opened. Inside a series of old train cars, the Gandy Dancer served steak, crab legs, lobster and prime rib, and customers drank and danced in the caboose.

The restaurant later became the Coal Creek Junction — a good place to dine on a "train to nowhere," according to a 1976 review in the Longmont Times-Call — and at some point, the building downgraded from four boxcars to two. But the caboose stayed put, even as the restaurant changed hands.

It was renamed Brothers Three in the 1980s and later Kaddy Shack BBQ and the Hickory Sticks Smoke House & Grill in the 1990s. An old commercial for Hickory Sticks beckoned customers to "come on down to the old train cars" for barbecue and bluegrass music.

When Hickory Sticks shut down in October 2001, no restaurant replaced it, and the building and the train cars and 45,000-pound caboose just sat there.

Stan Arnold, the owner of the property and son of one of the original builders of the restaurant, said the city recently asked him to do something with the decaying property, telling him it was a hazard. Arnold found a potential buyer, but he said the buyer wanted the trains and the restaurant demolished first.

So Arnold made plans to demolish the dilapidated structures on Dec. 9.

About five weeks before the demolition date, Ramos was walking by the property — where he would take his son, Tate, when he was little — and thought they'd surely save the trains. He called the property owners and learned everything was being demolished.

"They basically said, 'if you can do it before the wrecking crews show up,'' Ramos said, "'go for it.'"

Ramos talked it over with his wife, Laura. They didn't know the first thing about moving a 44,800-pound train caboose. But if it worked, they thought — if they could remove and restore a caboose and make it useful again — it would be a memory their children would have for life.

"That just tipped the scales for me," Ramos said. "This is going to be something that is written into the arc of my family's history. And I love thinking that this is something that my kids are never going to forget."

At the time, they had five weeks.

'We can hold onto what we have'

Ramos was up front about their situation: "This may come as a surprise," he wrote on a website he created for the cabose project, " but ... we've never moved a train car before."

The total cost of the project would be just over $14,000, not including the labor they needed to get the caboose ready to be moved. But after putting out a call for volunteers, 30 people showed up on a 17-degree morning. Some volunteers had handy experience, some had none.

"For some people it was like, 'Have you ever used a grinder before?' and they'd say no. And I'd say, 'Are you ready to learn?'" Ramos said. "So I'd teach them, give them a little crash course on how to use a grinder and not kill themselves, and let them have at it."

Ramos himself drove an excavator for the first time. They bought the cutting torch off Craigslist and learned how to use it from a YouTube video.

The property owners went ahead and demolished the restaurant and the two boxcars the day before the caboose was to be removed.

"I love that this is this big, crazy adventure, this big crazy thing that was very unlikely for it to happen," Ramos said, "but there was a chance."

Removal day came Feb. 29. They tied two bundles of balloons to the caboose. The crane arrived and a crew lowered the straps around the train car, and hooked them underneath. Four women who waited tables at the old Coal Creek Junction took pictures in front of the caboose. Ramos told a crowd why the project mattered so much to him and his family.

The crane lifted slightly. The straps tightened. Ramos saw light beneath the caboose.

The crane raised higher, the caboose still attached and intact. Ramos stood back and lifted his arms, like he couldn't believe what he was watching. With the caboose in the air, Ramos and the 100 or so spectators took a picture in front of it, a symbol of what the community had accomplished.