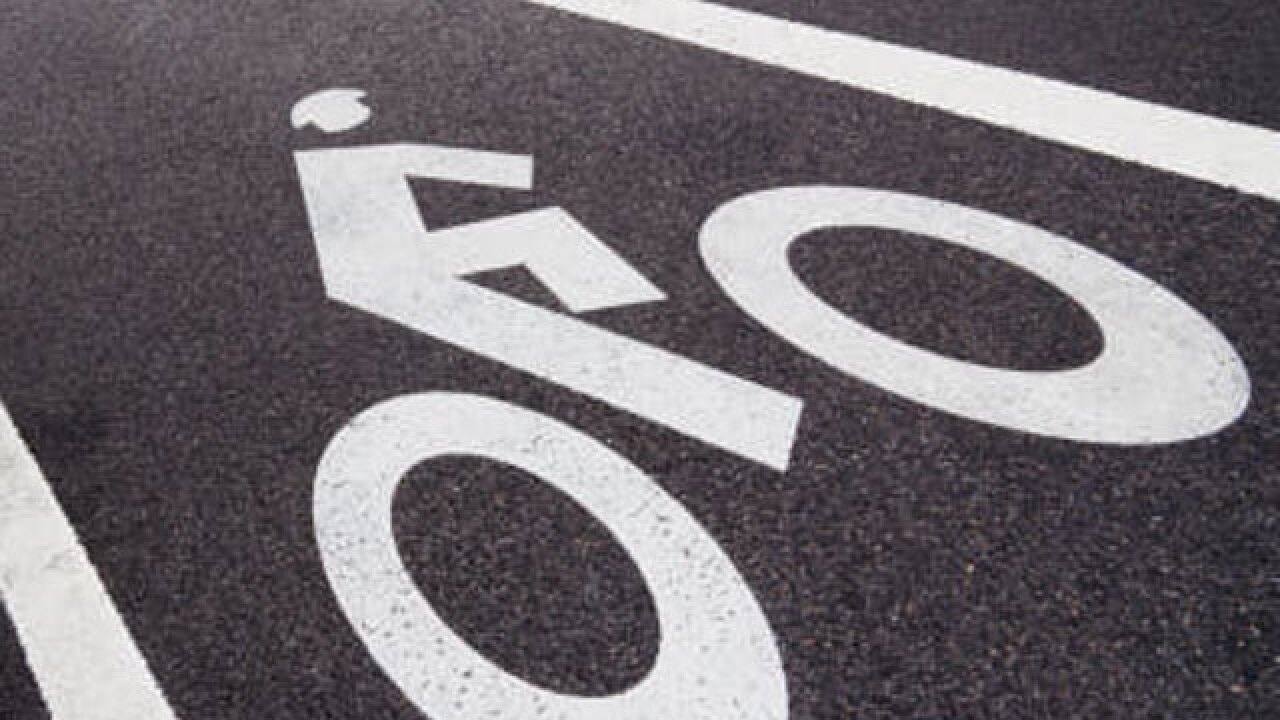 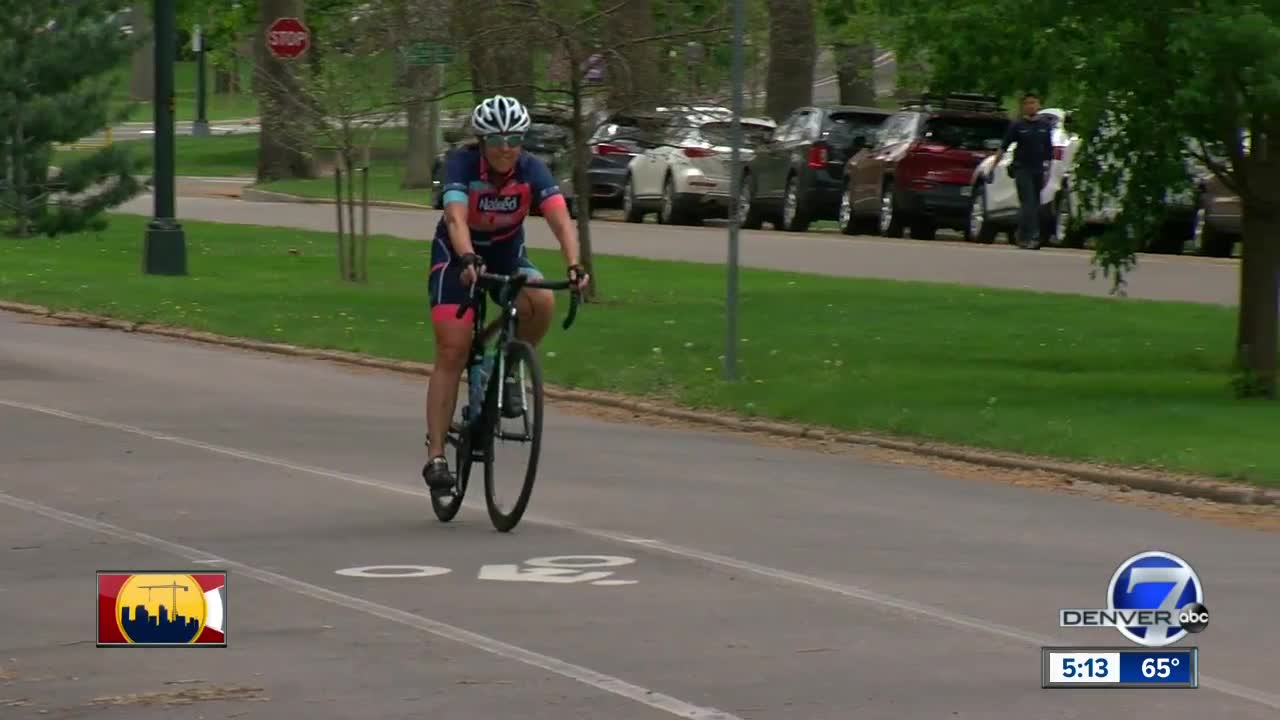 DENVER -- The city of Denver has come up with a proposal to add protected bike lanes along a four block stretch of S. Marion Street Parkway near Washington Park.

The street is very popular among cyclists since it connects the Cherry Creek Trail with Washington Park. The road already has a bike lane, but it’s considered a high-stress lane since it is only marked on the ground and nothing keeps cars out of it.

Instead, Denver officials have proposed a high-comfort bike lane that separates cars from bicycles using barriers. The proposal is part of the $18 million Elevate Denver Bond program. It is one of eight high-comfort lanes that the city is planning to install in 2020.

Avid cyclist Andrew Iltis commutes through S. Marion Street Parkway every day on his way to and from work and says he’s had some near misses.

“I’ve had a couple close calls on my bike and it’s just hard. You’re not as big as a 2,0000-pound vehicle and it’s really just you out there against those big machines and it feels a lot like you’re out in it,” Iltis said.

While the current bike lane is useful, Iltis said, it might not be enough to keep people safe.

“The bike lane is great, but it doesn’t necessarily provide any separation from traffic as they go by,” he said.

Iltis and other cyclists who use S. Marion Street Parkway regularly see the proposed high-comfort lane as a welcome addition.

“I have two elementary school kids and we ride in the street where we feel safe,” said Amy Kenreich.

Her first-grade daughter is still getting the hang of cycling and Kenreich says she can be a bit unpredictable while riding in the street even though she goes over the rules with her daughter routinely.

“We need all the protection we can get,” she said. “I would appreciate it if it were just a little more safe for vulnerable users.”

Tenly Williams, meanwhile, says she already does as much as she can to keep herself safe. Williams rides a unique, yellow bicycle with seats on the front of it for her children.

She also has lights attached to the bicycle and her helmet and an orange flag on the back and she wears bright colors when she’s out on the road.

“I go to great lengths to be visible when I’m cycling,” she said.

Williams stays in the bike lanes but says even they can be dangerous at times with cars driving by on one side and parked on the other side.

“When there are parked cars here, it’s pretty dangerous for cyclists because they’re in the doors zone because it’s difficult for drivers to see me and it’s also difficult for me to know if somebody’s going to open their door,” Williams said.

Both women say they’d feel much safer with a more protected lane and believe it could help people who are new to cycling to feel comfortable in this area.

For Iltis, the bottom line is that cyclists and people who live in the neighborhood are going to have to find a compromise when it comes to this high-comfort bike lane.

“Obviously, there’s going to have to be trade-offs,” he said.

Let the lane be

Despite the support from several avid cyclists, not everyone agrees that the new lanes are necessary.

Chris George is not only a resident of the area but also someone who uses the bike lane every day to pick up groceries and get some exercise. In fact, George says he tries to ride his bike every day when it’s not icy.

“I have had not a single worry about cars,” he said. “I have never had any complaints, never had any worries about this and I bike it at least every single day.”

George adamantly opposes the high-comfort lanes because he doesn’t think it’s necessary for the street.

“There’s so little traffic along here it’s not needed,” he said.

Instead, he believes there are other areas in Denver where this might be a better option like E. Virginia Avenue.

The biggest complaint he has about the area is the speed at which some of the faster cyclists come through the area. The only change he would like to see for the four-block stretch is for someone to monitor how quickly the bicycles are passing through.

Cyclist Chuck Smith has had a similar experience in the area and doesn’t support the idea of changing the bike lane.

“I don’t see any issue with this type of bike lane personally,” Smith said.

He believes it’s up to cyclists to pay attention to their surroundings with the high-stress bike lane to keep themselves safe.

“As far as a protected bike lane, my feeling is: bicyclers you got to be careful and put up all kinds of protections,” Smith said.

Still, he doesn’t believe a lane change is necessary.

Along with the speeding cyclists, his biggest complaint with Denver bike lanes in general was the number of potholes that he says can be dangerous for someone riding a bike.

Some of the residents who live in the high-rise towers along S. Marion are the high-comfort bike lane’s biggest critics.

Voradel Carey has been living along S. Marion for nearly 30 years and says this is an important area to preserve.

“It is a historical parkway and it’s about the trees and the beauty of the parkway,” said neighbor Carey.

The street is on the National Register for Historical Places. Carey says part of the charm has to do with the street’s design. She doesn’t want barriers put up that would change the aesthetic of the area.

“You’re destroying the whole beauty of the parkway by having a bike lane that’s raised an elevated,” Carey said.

The area has experienced changes over the years. Carey says the bike lanes were once closer toward the median instead of along the right side of the road but that changed about 15 years ago.

“We have a bike lane and it is safe. If people are worried about people opening their car doors on the bicyclists, then move it back to where it originally was on the parkway,” she said.

She has attended some of the community meetings about the proposed high-comfort lane and says she feels that the residents’ voices are being ignored.

Neighbor Ruth Ann Zisser is also opposed to the lane change. Her biggest concern has to do with the lack of space in the area.

“We have no delivery bays, we have no alley and all of the deliveries and move-in‘s and move out’s just have to occur on the street and it’s very difficult,” she said.

“To me, it doesn’t seem like the best use of the space,” Zisser said. “Putting a special lane for four blocks to connect Wash Park to Cherry Creek Trail and other trails seems a little excessive.”

She’s also worried about what it will mean when school resumes at Steele Elementary School nearby at the time parents drop off their children and whether the new lane will interfere with their drop-off zones.

Both Zisser and Carey say they would prefer for things to stay the same and are planning on fighting the change by educating their neighbors about how they can weigh in.

In a news release, Denver Public Works said its goal is to add 125 miles of new bikeways over the next five years to make it a safer and more viable transportation option.

About 50 miles of those new lanes will be paid for by the Elevate Denver bond that was approved by voters in 2017.

The city hosted a number of meetings in April and May to present its proposals and gather community feedback.

It is now taking the feedback it has received and using it to create a preferred bike lane concept for each of its eight high-comfort bikeway area proposals.

“Denver continues to work with residents to find ways to best tailor these high-comfort bikeways to their community. We want people of all ages and abilities to feel comfortable riding a bike,” Denver Public Works spokesperson Heather Burke said in an email to Denver7.

DPW says none of the proposals it presented at a community meeting to discuss S. Marion two weeks ago would eliminate parking.

It’s also coordinating with the Denver Fire Department and local hospitals to maintain vehicle access to the street and it’s working with the National Register of Historic Places to make sure that any changes in design would fall in line with the preservation of the parkway.

Despite the opposition from some neighbors, the city is hoping these high-comfort bike lanes will contribute to the safety of the area and further the city’s goal to encourage more people to consider alternative forms of transportation.