Yates told Trump that Flynn 'could be blackmailed' by Russia 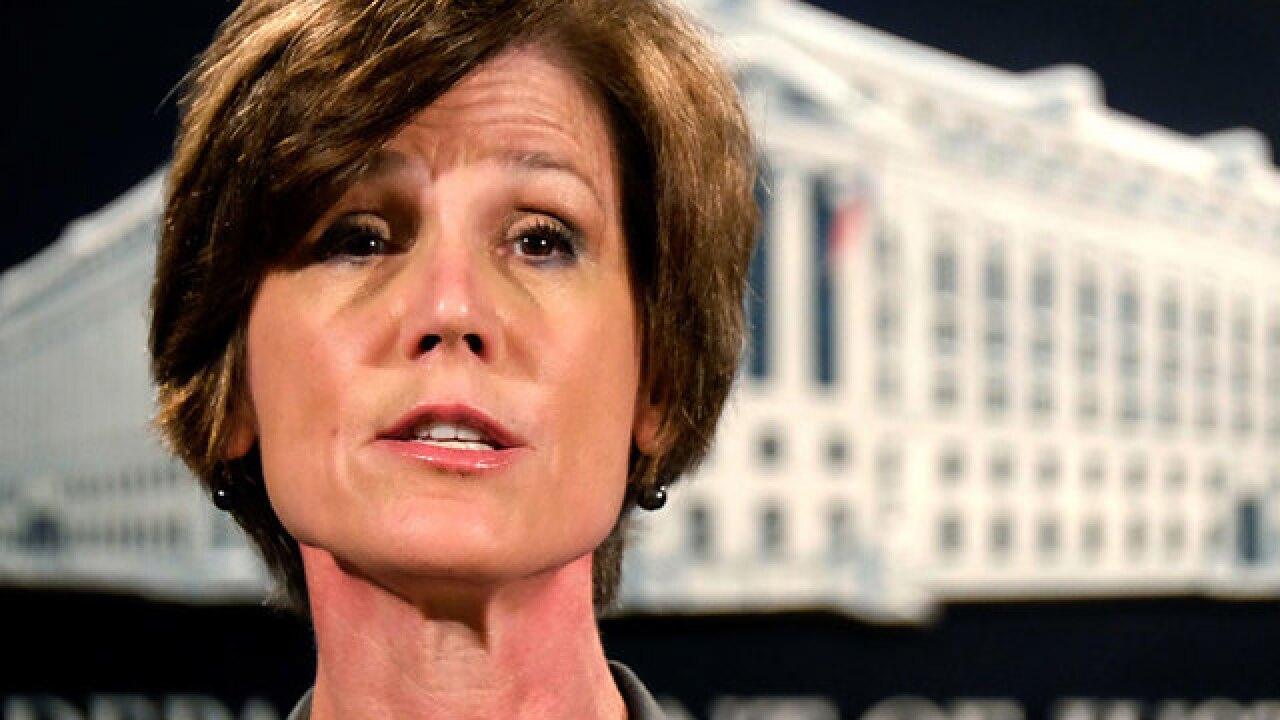 (CNN) -- Former acting Attorney General Sally Yates spoke for the first time before a Senate subcommittee, where her testimony Monday is expected to focus on what she told President Donald Trump's aides about former national security adviser Michael Flynn.

Subcommittee chairman Lindsey Graham opened the hearing with an implicit rebuke of the President and his alternative explanations for the interference in the election.

The South Carolina Republican said the hacking was not the work of "some 400-pound guy sitting on a bed or any other country," a reference to a comment Trump has previously made on the matter.

In her opening statement, Yates said that she planned to be as "fulsome and comprehensive as possible" within ethical and legal boundaries.

Yates also warned in her opening testimony that there were some issues she could not address publicly because they involved classified information. Similarly, she said that as a former official she was not authorized to discuss Department of Justice or other executive branch deliberations. It was not immediately clear how those constraints would affect her testimony on the Flynn question. Neither Flynn nor Trump were directly referenced in her opening statement.

"The efforts by a foreign adversary to interfere and undermine our democratic processes --- and those of our allies --- pose a serious threat to all Americans," Yates said.

Graham asked Yates whether she had any information about whether there was collusion between members of the Trump campaign and Russia.

"My answer to that question would require me to reveal classified information," Yates said.

Lawmakers have been wrangling behind the scenes at the Capitol to bring in Yates ever since it was reported that she warned Trump's White House counsel, Don McGahn, that Flynn had talked about US sanctions against Russia with the Russian ambassador to the US, Sergey Kislyak. Officials later confirmed to CNN that Trump transition officials warned Flynn against calling Kislyak, saying that Kislyak was likely being monitored by US intelligence.

Sen. Dianne Feinstein called for answers about what she said were "troubling" questions about the intentions of Russian intelligence agencies regarding people in Trump's orbit and warned that much was unknown about Flynn's activity.

"There are still many unanswered questions about General Flynn including who knew what and when," the California Democrat said, referring to the days leading up to his resignation, ostensibly for misleading Vice President Mike Pence.

Trump went on the offensive on Twitter Monday morning, hours before the hearing began, blaming the Obama administration for Flynn's security clearance and asking the committee to question Yates over leaking classified information to the media.

"General Flynn was given the highest security clearance by the Obama Administration - but the Fake News seldom likes talking about that," Trump wrote, adding later, "Ask Sally Yates, under oath, if she knows how classified information got into the newspapers soon after she explained it to W.H. Council."

A White House official told CNN that the administration plans to rebut Yates by employing two strategies: Calling into question her objectivity by arguing she is a partisan Democrat and questioning the timeline of events she is expected to present.

The Senate judiciary committee's crime and terrorism subcommittee also heard from former Director of National Intelligence James Clapper, who spoke in advance of Yates. He testified that he did not know about the FBI investigation into Russian meddling in the election and whether there were any links to the Trump campaign until its existence was announced in a congressional hearing by FBI Director James Comey in March.

"During my tenure as DNI, it was my practice to defer to the FBI director -- both (former FBI) Director (Robert) Mueller and Director Comey -- on whether, when, and to what extent they would inform me about such investigations," Clapper said.

Clapper issued a clarion call for vigilance over Russian election interference before it further eroded US democracy.

"They must be congratulating themselves for having exceeded their wildest expectations," he said. "They are now emboldened to continue such activities in the future, both here and around the world, and to do so even more intensely."

Graham, the leader of Monday's hearing, also invited former President Barack Obama's national security adviser, Susan Rice, to testify with Yates and Clapper, but she rejected the invitation through her lawyer, noting the last-minute timing of the invitation. A source familiar with Rice's discussions told CNN that when Graham invited her, Rice believed it was a bipartisan overture and was prepared to accept. However, ranking Democrat Sheldon Whitehouse indicated to her that the invitation was made without his agreement, as he believed her presence was not relevant to the topic of the hearing, according to the source.

Investigators on the House oversight committee raised the possibility last month that Flynn may have broken the law by not disclosing payments from RT-TV, widely considered by US officials to be a propaganda arm of the Russian government, on his 2016 national security clearance form. Flynn's lawyer at the time argued that Flynn had been open about his speech to RT-TV, including briefing the Defense Intelligence Agency on his trip.

Monday's hearing, which is expected to be dominated by Yates' warning to the White House on Flynn, is certain to put him back on center stage in the ongoing Russia investigations.

Yates' appearance itself has been fraught with drama ever since House intelligence chairman Devin Nunes' delayed her House hearing at the last minute, as part of a chaotic three-week stretch that saw the House Russia investigation almost fall apart and Nunes become the subject of a House ethics probe.

A White House official said last week that the administration still wants Yates to testify in public and reaffirmed Spicer's comments. Graham and Whitehouse also said they heard of no effort to stop her from coming before them.

Still, Democrats on the House Russia investigation are anxiously watching Monday's hearing: First, to see if Yates shows up and, second, to see how much she reveals publicly.