While America wages war on opioids, meth makes its comeback 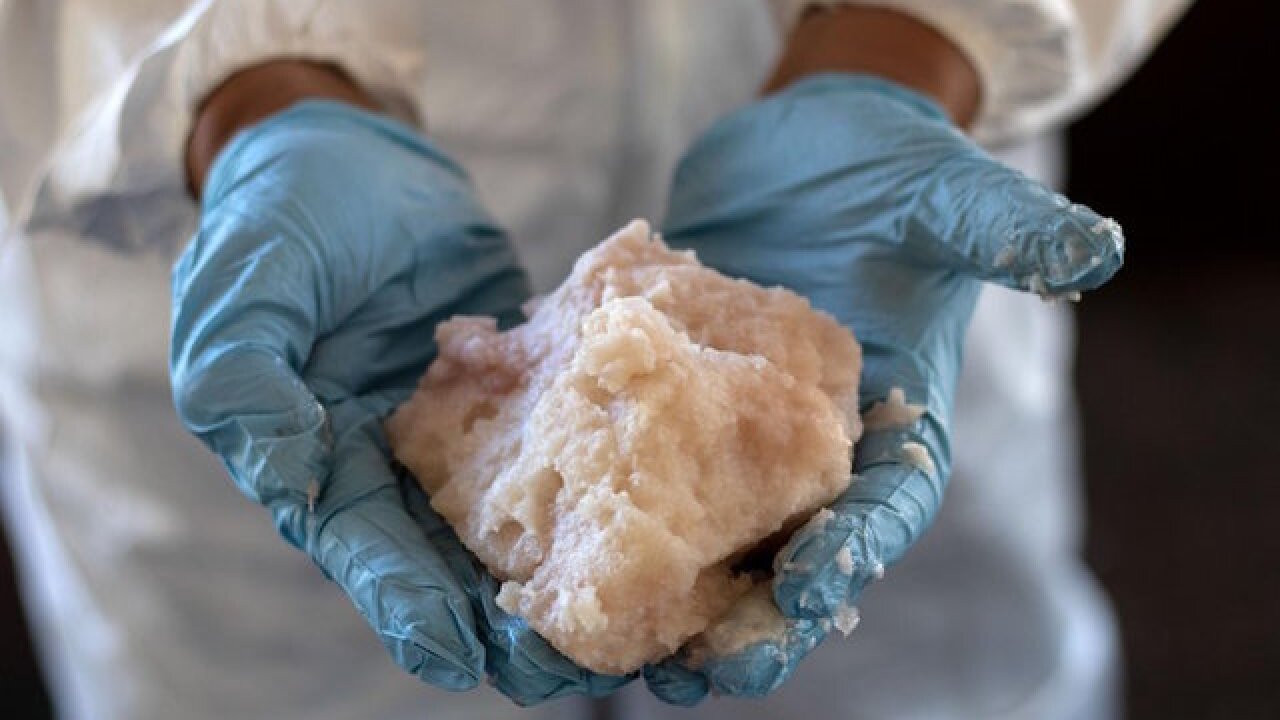 © 2018 Cable News Network, Inc.
Guillermo Arias/AFP/Getty Images
<p>And while much of America is focused on combating the devastating impacts of opioid addiction, some states like Oklahoma are struggling to fight a new battle against an old foe: Methamphetamine.</p>

For Capt. Mark Wollmershauser Jr. and the Tulsa Police Department, the late-2000s and early 2010s were an extremely dangerous time.

In Oklahoma, a state that is no stranger to the scourge of methamphetamine addiction, those years were the heyday of the "shake and bake" method -- a rudimentary way of making meth using just cold medicine, some toxic chemicals and an empty two-liter bottle.

The technique is simple enough that many addicts can cook their own meth, but with one tiny misstep, the chemical reaction that occurs inside  can cause deadly explosions .

By 2011, Wollmershauser and his narcotics unit were finding and dismantling hundreds of these vessels in meth labs around the city.

"People were not just burning themselves while cooking meth but were causing damage to other residents that had nothing to do with methamphetamine," he said. "It was a really horrible time."

When  new laws were enacted to limit access to pseudoephedrine  -- an allergy drug used in making meth -- the proliferation of these mobile labs waned. After responding to a high of 431 meth labs in 2011, his department encountered just 19 last year.

But Wollmershauser said that didn't spell the end of Tulsa's meth problem. In fact, officials across the state say they are seizing meth that is purer, cheaper and in greater quantities than ever before, with most of it coming from south of the border.

And while much of America is focused on combating the devastating impacts of opioid addiction, some states like Oklahoma are struggling to fight a new battle against an old foe.

The role of Mexican 'superlabs'

Richard Salter has been with the Drug Enforcement Administration for 27 years, most recently as the special agent in charge for the state of Oklahoma.

He said the meth problem in Oklahoma is getting worse, and points to Mexican cartels -- in particular, the powerful Sinaloa cartel -- as the reason.

As it became more difficult and dangerous to produce meth in the United States, cartels recognized an opportunity to fill the void.

"They came in with much purer, much cheaper meth and just flooded this region of the country," Salter said.

"That's as cheap as I have ever seen methamphetamine my entire career," he said.

The reason for the drop in prices is the scale of production that the Mexican cartels have achieved. Whereas "shake and bake" labs could turn out lots of small batches, so-called "superlabs" in Mexico produce hundreds of pounds daily.

Salter said most of the meth his agents seize first comes across the US-Mexico border in California or Arizona, before making its way through the interstate highway system and temporary stash houses on its way to Oklahoma.

Along the border, officials with US Customs and Border Protection also report a steep increase in the amount of meth they are seizing.

Anne Maricich, deputy director of field operations for the agency's San Diego ports of entry, said her field office has seen a 50% increase in the amount of meth seized compared to this time last year.

"The other hard narcotics like cocaine, heroin and fentanyl, we see them -- they're prevalent at our border crossings, but nowhere near the quantities that we see of meth," she said.

On the streets of Oklahoma, this influx of cheap and powerful meth has had deadly consequences.

The number of lethal meth overdoses in the state has more than doubled in recent years, rising from 140 in 2012 to 335 deaths in 2016. In 2017, there were 327 meth overdose deaths, but that tally is incomplete and the actual number is likely higher, according to Mark Woodward, spokesman with the Oklahoma Bureau of Narcotics.

"There's so much attention -- not just in Oklahoma, but nationwide -- on the opioid crisis," said Woodward. "But our single most deadly individual drug is methamphetamine."

Perhaps no city has been hit harder by this latest meth epidemic than Tulsa.

In just the first six months of 2018, Wollmershauser said his Special Investigations Division has already surpassed the amount of meth they seized in all of 2017 by 30 pounds.

He can't explain why the problem is more severe here than in other parts of the state, but he doesn't think incarceration is the solution.

Wollmershauser said his department is trying to use more "front end diversion" tactics to help addicts get treatment without getting the criminal justice system involved, while also aggressively pursuing the cartels and other large-scale distributors.

While the amount of meth his officers has seized has risen, he said his department is on track to reduce the number of arrests by 40% this year.

"I think we're definitely targeting the right folks that are taking advantage of our city and citizens, but the addiction is strong and it's difficult," Wollmershauser said.

How meth fueled a crisis behind bars

Lindsay McAteer's struggles with anxiety and depression led her to self-medicate as a teenager.

At age 14, her boyfriend at the time introduced her to meth.

It was the beginning of a 20-year struggle with the drug that nearly ended with a life sentence.

After using meth for several years, she said she stopped for a brief period, but after she was laid off from work and had her house foreclosed on, her addiction spiraled out of control.

"I had nothing," McAteer said. "I was losing everything, and meth was able to make me feel like everything was OK, despite the fact that nothing was OK."

In addition to using meth, McAteer began selling the drug. She was eventually arrested for trafficking and found herself staring at a possible sentence of 12 years to life.

Mass incarceration is also an issue in Oklahoma -- particularly among women -- and  lengthy sentences for drug offenses are a major contributing factor , according to analysis by  Reveal from The Center for Investigative Reporting . The state has the  nation's highest female incarceration rate , with 149 out of every 100,000 women locked up, more than double the national average.

But even for those like McAteer who face time in prison, there are sometimes alternatives to a life behind bars.  Women in Recovery , or WIR, is an intensive program for women who are looking at lengthy sentences for drug offenses in Tulsa County.

With the door of a prison cell the only other option that was open to her, McAteer entered WIR in August 2014.

Mimi Tarrasch, the executive senior director for WIR, said that many of the program's participants are multi-substance users, but at least 60% have seen their addictions lead them to meth.

"Early on, because it's a stimulant, they feel wonderful and it makes them productive and motivated," said Roxanne Hinther, clinical director for WIR. "But ultimately, they can't take care of their children and they lose everything they have."

Tarrasch said that most of the women in her program have been battling addiction for 13 to 15 years, which takes a huge toll on their health and wellness, and that of their family. Many have also experienced traumatic events, from childhood abuse to sexual assaults and domestic violence.

Using a range of treatments, training and education, the program gives women who would be spending time behind bars a second chance at a productive and fulfilling life.

McAteer graduated from WIR in 2016 and has now been in active recovery for more than four years. Today, she works as a housing compliance specialist for the Mental Health Association Oklahoma.

Since Women in Recovery began in 2009, 390 women have graduated, with 6.7% of graduates relapsing or falling back into criminal activity.

"I can say that recovery is definitely possible, and I can say that treatment is the answer versus punishment," McAteer said. "It's not foolproof -- I can't say that everyone is able to use this [program] the way it's designed to work, but the vast majority of us do."