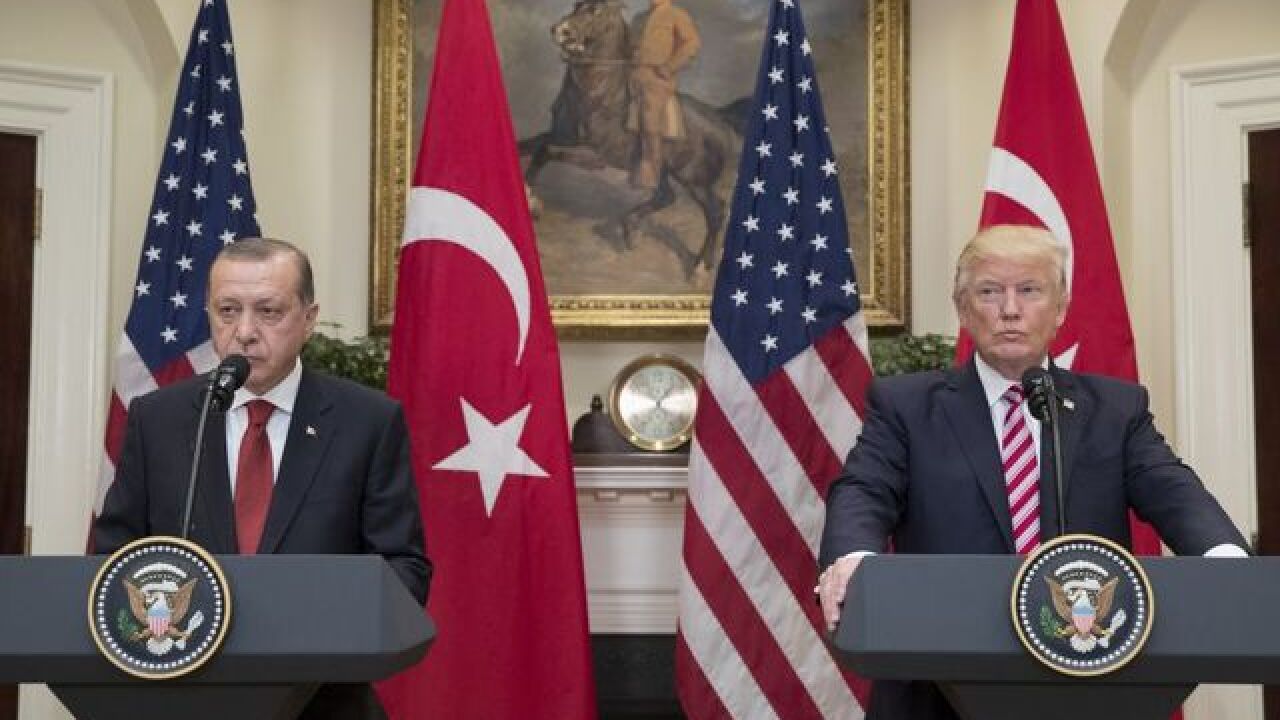 The US State Department said it is "concerned by the violent incidents involving protestors and Turkish security personnel" in a statement on Wednesday.

"Violence is never an appropriate response to free speech, and we support the rights of people everywhere to free expression and peaceful protest," the statement said. "We are communicating our concern to the Turkish government in the strongest possible terms."

A State Department official said the Turkish security that was involved appears to be a mix of Turkish embassy and Erdogan security staff.

Federal and local law enforcement are going through security video to identify exactly who was involved.

"We intend to ensure accountability of anybody involved," DC police chief Peter Newsham said at a news conference Wednesday.

Repeated CNN inquiries for comment from the Turkish Embassy and government went unanswered.

The incident came as Trump extended a warm welcome to Erdogan, an authoritarian-style leader who had a strained relationship with the previous US administration.

"We've had a great relationship and we will make it even better," Trump said in the Oval Office as he sat beside Erdogan. "We look forward to having very strong and solid discussions."

The anti-Erdogan protest was organized by Kurdish Americans, the Armenian National Committee of America and supporters of the Peoples' Democratic Party (HDP), a pro-Kurdish political party in Turkey.

A protest organizer tells CNN there were fewer than 25 protesters in total.

Flint Arthur, an anti-Erdogan protester, told CNN Tuesday that police had them stand in a roundabout park across the street from Erdogan supporters near the Turkish ambassador's residence.

"A few police officers stood between us," Flint said.

One observer told CNN the entire melee started when a plastic water bottle was thrown; it's not clear by whom. CNN is not publishing the name of that observer as they were not authorized to speak to the media.

"After the police line broke, all fought with each other no matter if they were officially on duty or civilian," said the observer.

Video captured by the Voice of America Turkish service purports to show the first brawl.

Police were caught off guard, said another eyewitness, as Erdogan was yet to arrive. CNN is not publishing the name of the eyewitness for security concerns.

"I, myself, (saw) a Turkish bodyguard kicking a Kurdish protester," that eyewitness said. "An American police (officer was) trying to stop him hitting (the protester) with a stick."

That Kurdish protester, in red pants, was Lucy Usoyan. After she was hit with the flying water bottle, she said she remembers falling to the ground.

"I could feel that someone was heavily beating my head and back," she told CNN. Soon after, she lost consciousness.

In the Voice of America video, three men are seen kicking Usoyan. One of the men is in a suit, the other two are in attire that Erdogan's personal security detail wears---one appears to have a weapon holstered on his side.

"I didn't expect it would be so violent," said Usoyan. "I had heard many stories of protests in Turkey. But okay, that's Turkey."

Arthur told CNN that some of the men who attacked them were part of the Turkish security detail.

"We were attacked by people in suits with earpieces in," he said.

Aram Hamparian, who works with the Armenian National Committee of America, arrived just prior to the violence.

"(The Erdogan supporters) got very agitated," he told CNN on Tuesday. "There was a lot of energy on that side. They crossed the line. They ran around the police line. Crossed the circle and attacked the protesters."

Hamparian said the individuals were, "very capable of beating people up."

"They were really well trained; some of the photos show that they had weapons on them," he said; the Voice of America video appears to show some individuals with sidearms.

"At some point, somebody on the Erdogan side, sent a bunch of security folks," Hamparian added.

Some of the individuals, in the videos seen by CNN, also appear to be wearing the same uniform as Erdogan's personal security detail. A CNN analysis of photos shows the security detail at previous Erdogan events wearing their uniform: a brown, unbuttoned shirt with a black undershirt and beige pants.

"The guys were very violent," said Hamparian. "They knew what they were doing. It wasn't like people wrestling in the street."

Mayor Muriel Bowser issued the following statement on Wednesday morning: "What we saw yesterday -- a violent attack on a peaceful demonstration -- is an affront to DC values and our rights as Americans. I strongly condemn these actions and have been briefed by Chief Newsham on our response. The Metropolitan Police Department will continue investigating the incident and will work with federal partners to ensure justice is served."

The Washington Fire and EMS Department's Twitter account said that nine people were injured during the protests on Tuesday. Those injured were taken to George Washington University Hospital and Georgetown Hospital.

In a separate video from Voice of America, a very bloodied Erdogan supporter is helped away from the scene. It's unclear how he received these injuries.

The observer who was not authorized to talk to the media told CNN that the individual was hit by a megaphone by anti-Erdogan protesters and received 17 stitches to his head.

They say that when DC Police refused to arrest that anti-Erdogan protester, it angered the crowd.

Hamparian tells CNN that injuries ranged from cuts and bruises, some of which required stiches.

Despite Trump's greeting to the Turkish leader, the relationship has been strained by the United States' refusal to extradite a Turkish cleric living in Pennsylvania, whom Erdogan blames for orchestrating a July coup attempt against him.

And the two countries are at odds over Trump's decision to arm Kurdish militias that are helping in the fight to rout ISIS from its Syrian stronghold in Raqqa. Turkey sees these militias as an extension of the outlawed Kurdistan Workers Party, or PKK, which is considered a terrorist group in the United States, Turkey and Europe.