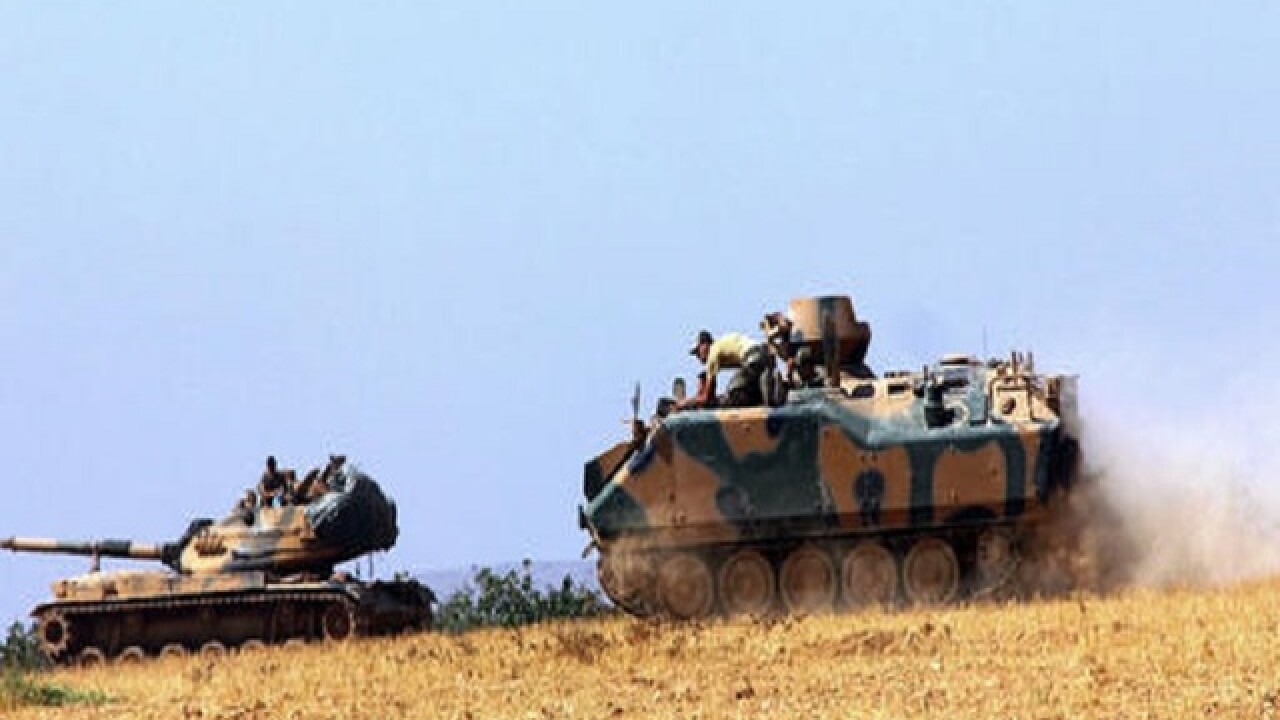 ANKARA, Turkey (AP) — After a pre-dawn barrage of heavy artillery and airstrikes, Turkey sent tanks and special forces into Syria on Wednesday to help clear a border town of Islamic State militants, marking the NATO member's most significant military involvement so far in the Syria conflict.

Hours after the start of the operation, Turkey's state-run news agency and a Syrian opposition media activist said the rebels captured Kaklijeh — an IS-held village near Jarablus — with the support of Turkish armored units. The village is some 3 kilometers (1.8 miles) from the Turkish border, the Anadolu Agency said.

Turkish President Recep Tayyip Erdogan said the military operation aims to prevent threats from "terror" groups, including the Islamic State and a U.S.-backed Syrian Kurdish militia that is affiliated with Turkey's outlawed Kurdish rebels. Erdogan said the operation was in response to a string of attacks in Turkey, including a suicide bombing at a wedding party near the border that killed 54 people.

Wednesday's dual-purpose operation puts Turkey on track for a confrontation with the U.S.-backed Kurdish fighters in Syria, the most effective fighting force against IS in the area.

Turkey is concerned about the growing clout of the group, which it says is linked to Kurdish groups waging an insurgency in southeastern Turkey.

A senior official with Syria's largest Kurdish group suggested Turkey will pay the price. Saleh Muslim, the co-president of the Democratic Union Party or PYD, tweeted that "Turkey is in Syrian Quagmire. Will be defeated as Daesh" will be. He used the Arabic language acronym for IS.

The latest developments have thrust Jarablus into the spotlight. The town, which lies on the western bank of the Euphrates River where it crosses from Turkey into Syria, is one of the last important IS-held towns between Kurdish-controlled areas in northern Syria. It is located 20 miles (33 kilometers) from the town of Manbij, liberated from IS by Kurdish-led forces earlier this month.

Taking Jarablus and IS-held town of al-Bab to the south would be a significant step toward linking up border areas under Kurdish control on both sides of the Euphrates.

Turkish Foreign Minister Mevlut Cavusoglu said Syrian Kurdish forces "must as soon as possible cross to the east of the Euphrates."

"That's what the United States' promised. That was our agreement," he added. "Otherwise, and I say this clearly, we will do what is necessary."

Turkey's private NTV television, which said that up to 20 Turkish tanks crossed the border, earlier Wednesday reported that a small number of Turkish special forces had crossed into Syria as part of the operation. NTV called it an "intruder mission" meant for "pinpoint operations" against IS in Jarablus.

The Syrian Observatory for Human Rights, an opposition activist group that monitors the civil war, said Syrian rebels who were amassed at the Turkish border crossed into Syria, preceded by Turkish tanks and mine sweepers.

Ahmad al-Khatib, a Syrian opposition media activist embedded with the rebels who crossed into Syria, said some 1,500 opposition fighters were involved. He said the fighters come from the U.S.-backed Hamza brigade, as well as rebel groups fighting government forces in Aleppo, such as the Nour el-Din el Zinki brigade, the Levant Front, and Failaq al-Sham.

Fighters from the powerful and ultraconservative Ahrar al-Sham brigade are also present, he said and confirmed Anadolu's report that the rebels seized the IS-held village of Kaklijeh near Jarablus.

Just a few hours after the operation started, Vice President Joe Biden landed in Ankara for talks that include developments in Syria.

Biden's visit comes at a difficult time for ties between the two NATO allies — Turkey is demanding that Washington quickly extradite a U.S.-based cleric blamed for orchestrating last month's failed coup while the United States is asking for evidence against the cleric and that Turkey allow the extradition process to take its course.

Turkish Interior Minister Efkan Ala said that Wednesday's operation was being carried out in coordination with the U.S.-led coalition forces.

Turkey's Hurriyet newspaper quoted Turkish sources as saying Turkish Howitzers and rocket launchers had fired 224 rounds at 63 targets within an hour and 45 minutes, and that the Turkish air raids started just after 6 a.m.

Turkey had declared the border area a "special security zone," and asked journalists not to try access it, citing safety concerns and threats posed by the IS.

In recent days, Turkey increased security measures on its border with Syria, deploying tanks and armored personnel carriers. On Tuesday, residents of the Turkish town of Karkamis, across the border from Jarablus, were told to evacuate after three mortars believed to be fired by IS militants landed there, Turkey's Dogan news agency said.

Turkey has vowed to fight IS militants at home and to "cleanse" the group from its borders after a weekend suicide bombing at a Kurdish wedding in southern Turkey killed at least 54 people, many of them children. Turkish officials have blamed IS for the attack.

The Kurdish-led group known as the Syria Democratic Forces, or SDF, recaptured the town of Manbij from IS earlier this month, triggering concerns in Ankara that Kurdish forces would seize the entire border strip with Turkey. The U.S. says it has embedded some 300 special forces with the SDF, and British special forces have also been spotted advising the group.

The Kurds' outsized role in the Syrian civil war is a source of concern for the Syrian government as well. Fierce clashes erupted between the two sides over control of the northeastern province of Hasakeh last week, and Syrian warplanes bombed Kurdish positions for the first time, prompting the U.S. to scramble its jets to protect American troops in the area.

The Syrian government and the Kurds agreed on a cease-fire Tuesday, six days after the clashes erupted. The Kurdish Hawar News Agency said government forces agreed to withdraw from Hasakeh as part of the truce.

Syrian state media did not mention any withdrawal, saying only that the two sides had agreed to evacuate the wounded and exchange detainees. Government and Kurdish forces have shared control of Hasakeh since the early years of the Syrian war.