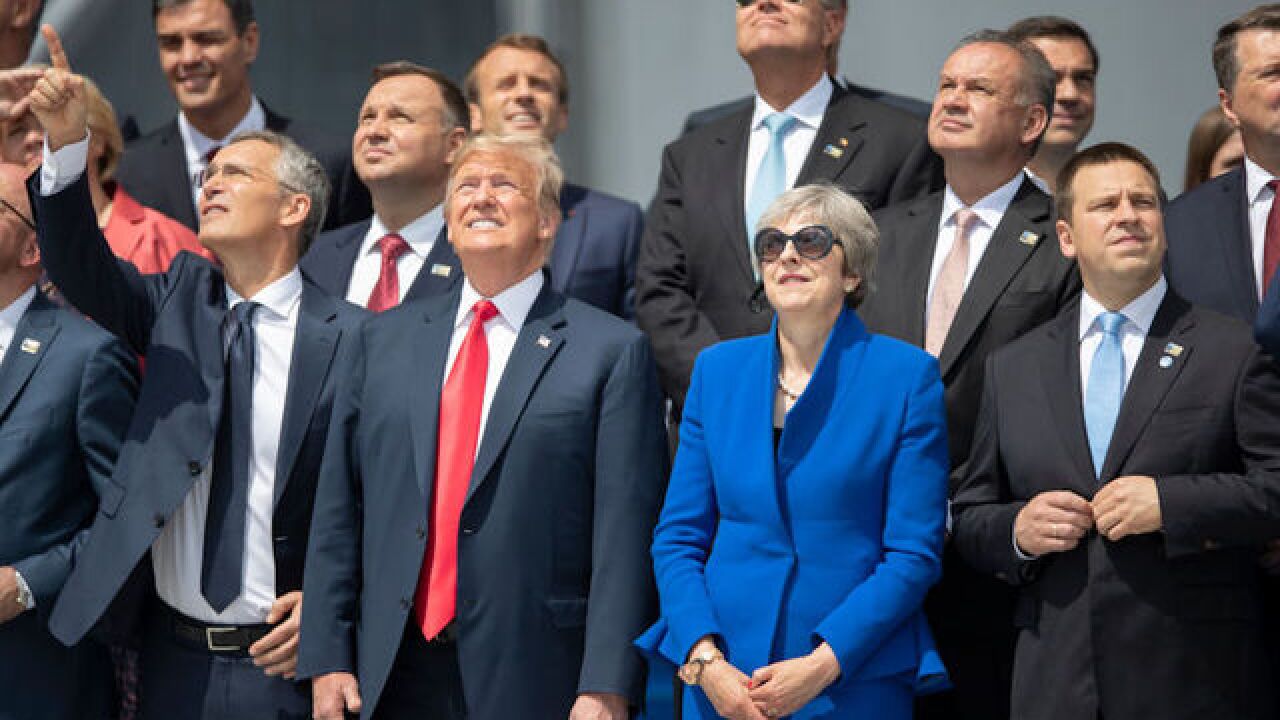 Image copyright 2018 Getty Images. All rights reserved. This material may not be published, broadcast, rewritten, or redistributed.
Jasper Juinen
<p>Heads of state and government, including (from L to R, first row) Belgian Prime Minister Charles Michel, NATO Secretary General Jens Stoltenberg, U.S. President Donald Trump, British Prime Minister Theresa May and Estonia's Prime Minister Juri Ratas attend the opening ceremony at the 2018 NATO Summit at NATO headquarters on July 11, 2018 in Brussels, Belgium. Leaders from NATO member and partner states are meeting for a two-day summit, which is being overshadowed by strong demands by U.S. President Trump for most NATO member countries to pay more towards funding the alliance. </p>

President Donald Trump on Wednesday suggested NATO leaders increase their defense spending to 4 percent -- doubling the 2 percent target that many NATO countries have yet to meet.

"During the President's remarks today at the NATO summit he suggested that countries not only meet their commitment of 2 percent of their GDP on defense spending, but that they increase it to 4 percent," White House press secretary Sarah Sanders confirmed in a statement.

"President Trump wants to see our allies share more of the burden and at a very minimum meet their already stated obligations," Sanders said.

But according to the latest numbers from NATO, the US doesn't even spend as much as Trump is calling on other countries to.

Earlier Wednesday, Trump said the US, "in actual numbers," is spending 4.2 percent of its GDP on defense. However, according to numbers just released by NATO on Tuesday, the US is expected to spend an estimated 3.5 percent of the GDP on defense in 2018. That is lower than last year's number, which was at 3.57 percent. Germany's estimated for 2018 is 1.21 percent, slightly higher than last year's.

"On top of that, Germany is just paying a little bit over 1 percent, whereas the United States, in actual numbers, is paying 4.2 percent of a much larger GDP," Trump said during a breakfast with the NATO chief Jens Stoltenberg.

One senior European diplomat said Trump's suggestion was "not good."

"The summit should send a strong signal to (Russian President Vladimir) Putin, and now show strong differences between allies. We would prefer a different situation," the diplomat told CNN's Michelle Kosinski.

"But we're not worried about it. We compare it to fights among families. Things can get nasty, but it's still a family," the diplomat added.

Trump has long complained that NATO members are not meeting their fiscal obligations to the alliance.

"Many countries in NATO, which we are expected to defend, are not only short of their current commitment of 2 percent (which is low), but are also delinquent for many years in payments that have not been made. Will they reimburse the U.S.?" Trump tweeted on Tuesday.

On Wednesday, Trump singled out Germany for particular criticism as he continued to assail NATO allies for failing to spend 2 percent of their GDP on defense spending, a target NATO allies agreed to meet by 2024.

Trump erased that timeline Wednesday as he stepped up his calls for increased defense spending, saying allies should do so "immediately."

Addressing reporters within hours of Trump's comments, German Chancellor Angela Merkel touted German contributions to NATO and in defense of US interests.

"Germany also does a lot for NATO. We are the second largest donor of troops, we put most of our military abilities into the service of NATO and we are strongly committed in Afghanistan, where we also defend the interests of the United States of America. Because the deployment in Afghanistan has to do with the only example of Article 5," Merkel said upon arriving at NATO headquarters Wednesday.