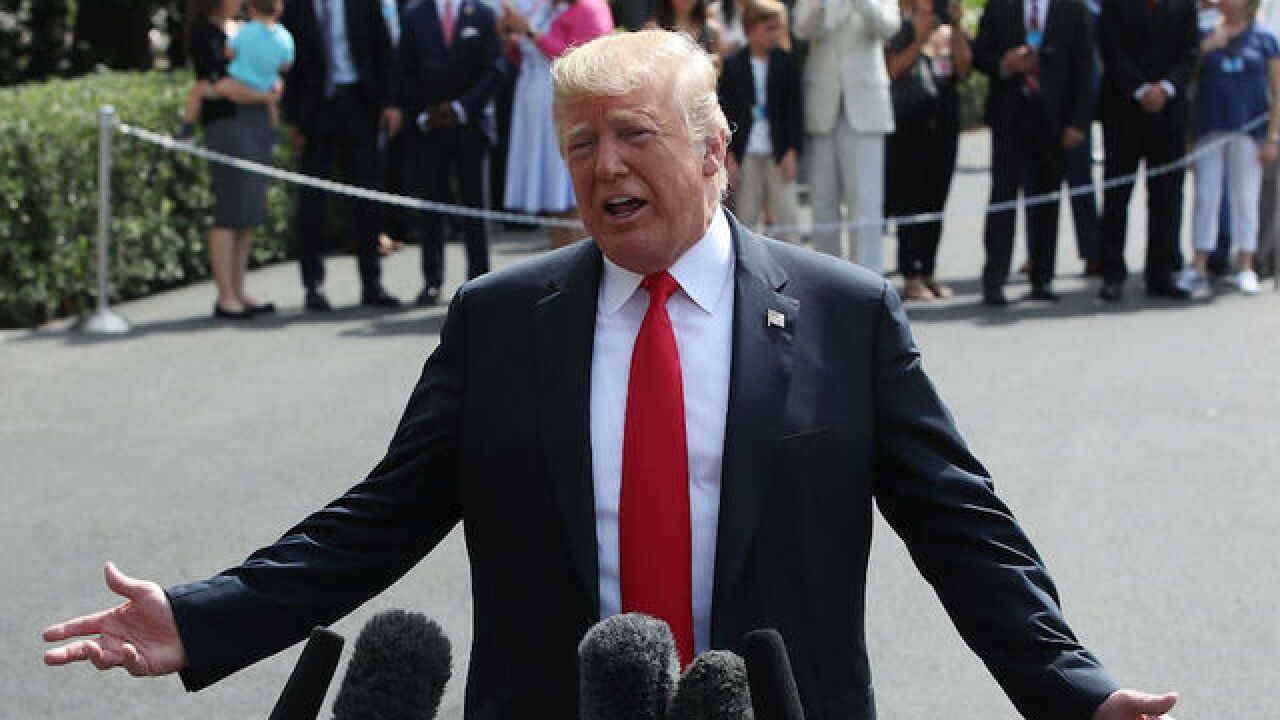 Image copyright 2018 Getty Images. All rights reserved. This material may not be published, broadcast, rewritten, or redistributed.
Mark Wilson
<p>U.S. President Donald Trump speaks to the media before departing on Marine One to travel to New York, at the White House on August 17, 2018 in Washington, DC. </p>

McCarthy led a Cold War-era inquisition of alleged Communists who he claimed had infiltrated American governmental institutions. The Wisconsin Republican's assertions, famously voiced in a speech in 1950, contributed to the paranoia and fear known as "the Red Scare." A special Senate Foreign Relations subcommittee investigated McCarthy's initial claims about Communists infiltrating the State Department and found them to be "a fraud and a hoax."

Upon becoming chairman of the Senate Government Operations Committee's subcommittee on investigations in 1953, McCarthy expanded his probes into alleged communist activity. In 1954, he began investigating the US Army. The three months of Army-McCarthy hearings shattered the senator's image and led to his censure by the Senate.

The President's comparison between the special counsel's investigation into Russian interference in the 2016 presidential election and the trials of McCarthyism was one of a series of tweets that lashed out at the probe Sunday morning. Trump directed particular ire at a Saturday New York Times report that White House counsel Don McGahn has been cooperating extensively with the special counsel.

Michael Hayden, a former director of the CIA and National Security Agency, was asked about Trump's comparison of Mueller to McCarthy on CNN's "State of the Union."

"So, Joe McCarthy was a demagogue. And we haven't heard a public syllable from Bob Mueller in more than a year," Hayden said. "And I have got to add that McCarthy's lawyer, Roy Cohn, became Donald Trump's personal lawyer -- lawyer and mentor for decades. I mean, the irony here is just amazing.

Cohn, who died in 1986, worked closely with Trump beginning in the 1970s. For more than a decade, Cohn represented Trump on construction deals and his lawsuit against the NFL.

The Times reported McGahn had participated in interviews spanning 30 hours over the last nine months. He provided "detailed accounts about the episodes at the heart of the inquiry into whether President Trump obstructed justice," including providing information that the Mueller team otherwise would not have learned about, the Times reported, citing a dozen current and former White House officials and other individuals briefed on the matter.