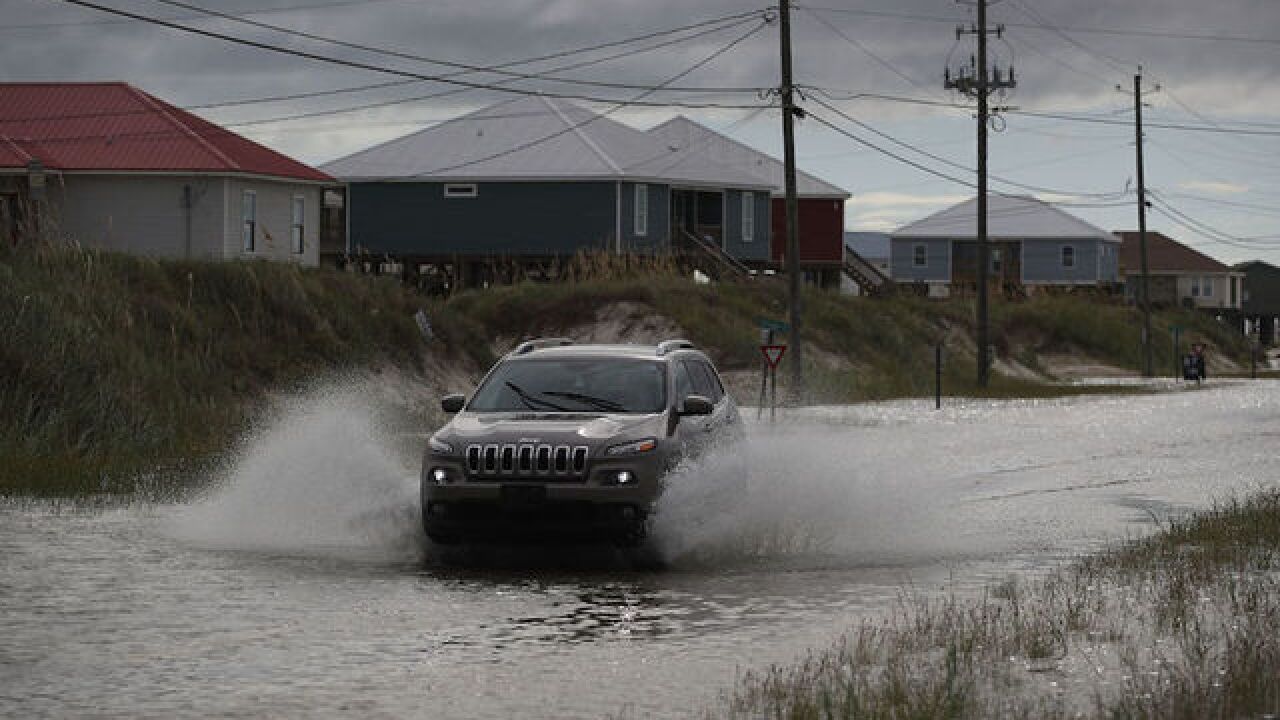 Image copyright 2018 Getty Images. All rights reserved. This material may not be published, broadcast, rewritten, or redistributed.
Joe Raedle
<p>A vehicle drives along a flooded street caused by the approaching Tropical Storm Gordon on September 4, 2018 in Dauphin Island, Alabama. </p>

Tropical Storm Gordon is pouring rain on the Gulf Coast region Wednesday after it made landfall Tuesday night west of the Alabama-Mississippi border, killing a child in the Florida Panhandle, the National Hurricane Center said.

The child died when a tree fell on top of a mobile home in Pensacola as Gordon whipped the region with tropical storm-force winds and heavy downpours, a spokeswoman with the Escambia County Sheriff's Office said.

The child's age and identity were not released. No one else inside the home was injured, spokeswoman Amber Southard said.

The storm's strong winds have knocked out power in the Florida Panhandle and southern Alabama, leaving at least 30,000 people in the dark, several utility companies said.

As of early Wednesday, Gordon was about 20 miles northwest of Hattiesburg, Mississippi, with sustained winds of 40 mph. The storm is moving toward the northwest across the lower Mississippi Valley, bringing with it rain and potential flooding.

While Gordon is expected to weaken rapidly as it continues moving inland, authorities across the Gulf Coast and Florida Panhandle are warning residents about widespread flooding and the possibility of a tornado.

Gordon could drop heavy rain -- generally 4 to 8 inches, but as many as 12 -- from Florida's western panhandle to southern Arkansas through Thursday, the National Hurricane Center said .

Seawater could spill onshore as high as 3 to 5 feet, spelling significant trouble for roads and towns along the coast.

"If you are less than 3 to 5 feet above sea level (in the warning area), you need to get away from that water, especially up those rivers, because that's where that water will be going," CNN meteorologist Chad Myers said.

In New Orleans, Mayor LaToya Cantrell had issued a voluntary evacuation notice for areas outside the levee system.

The city expected to feel the storm's impact through Wednesday, she said. City Hall and government offices closed Tuesday and will only be opened half day on Wednesday. Many schools in the New Orleans metro area remained closed Wednesday.

In anticipation of heavy rains, the Flood Protection Authority-East, or FPA, had closed 38 floodgates, 13 valve gates and a concrete barge gate on the Lake Borgne Surge Barrier near New Orleans, according to a news release.

The gates are in Orleans and St. Bernard parishes, primarily along the Industrial Canal and susceptible to high-tide conditions if not closed, the city said. Levee overtopping and breaches at these locations in 2005 led to devastating flooding from Hurricane Katrina in New Orleans' Lower 9th Ward, the city's eastern swath and in St. Bernard Parish.

Airlines including Delta, Southwest and Frontier warned that delays and flight cancellations were possible at airports near the Gulf Coast because of the storm, and that they may waive fees for itinerary changes.