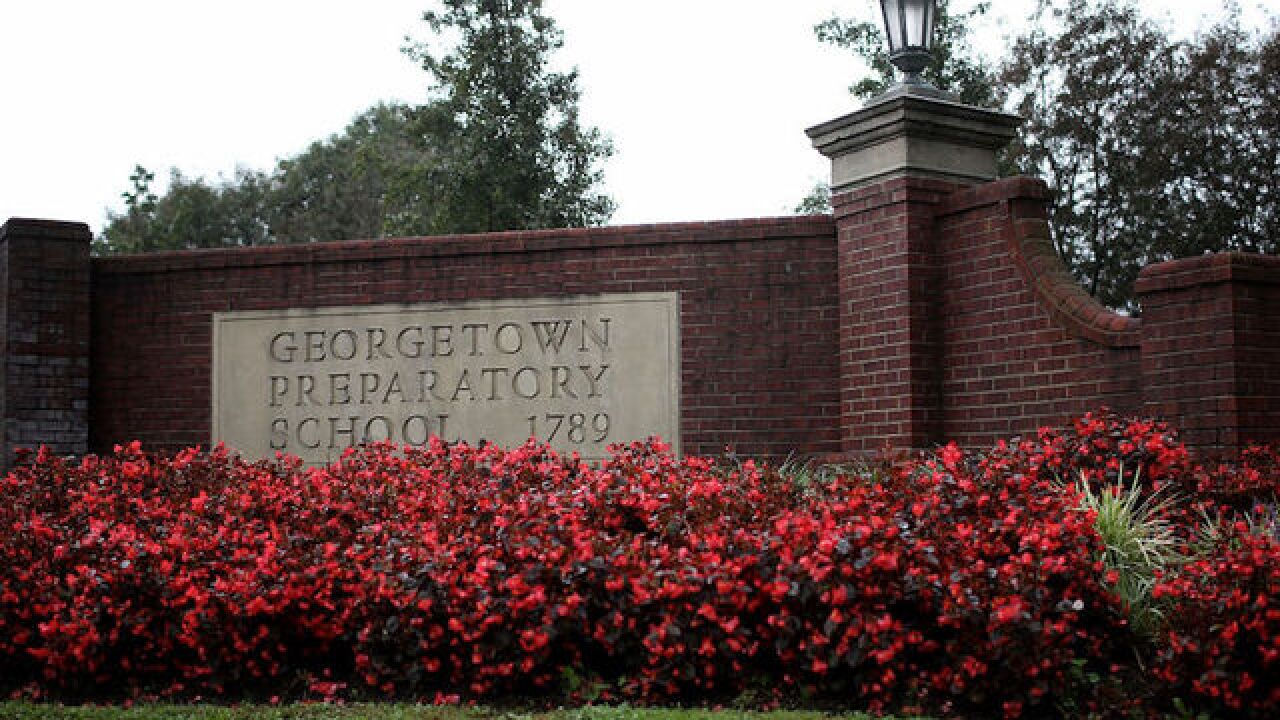 Image copyright 2018 Getty Images. All rights reserved. This material may not be published, broadcast, rewritten, or redistributed.
Win McNamee
<p>The entrance to the Georgetown Preparatory School is shown on September 18, 2018 in Bethesda, Maryland. Supreme court nominee Brett Kavanaugh attended the all-boys high school in the early 1980s. Kavanaugh has been accused of assault by Christine Blasey Ford, who was a student at the all-girls Holton Arms School, when the two were students. </p>

A goal of drinking 100 beer kegs by the end of senior year. A party with a stripper. A student falling through ceilings at house parties. These are new details coming to light in Mark Judge's descriptions of his days as a Georgetown Prep student.

One of Brett Kavanaugh's close friends during his early years, Mark Judge, has come under scrutiny for his descriptions of his party-hearty high school days at Georgetown Prep, the elite school that Judge and Kavanaugh attended just outside Washington, DC.

In "Wasted: Tales of a Gen X Drunk," Mark Judge describes in detail the raucous parties that would occur with Georgetown Prep School students on the weekends when he was a high school student.

CNN has reviewed portions of the book, which is out of print.

In one passage of the book in a chapter titled "A Functioning Alcoholic," senior year students, including Judge, lamented the news that they would be spending Sundays during their senior year doing community service.

"'We have to do something,' I said. 'They can't get away with this our senior year.'

"'What are we going to do?' Shane said, laughing. 'Drink a hundred kegs and brag about it?'

Judge and his high school buddies went on to create a newspaper called the Heretic, a riff on their school newspaper the Saint. One of the main objectives of the paper, as laid out by Judge in the book, was to chronicle "the 100-keg quest and everything that happened on the way."

According to his book, Judge and his friends continued to publish and anonymously distribute the paper on campus, with a continued emphasis on the 100-keg quest in the pages. Judge wrote that by March of his senior year, the keg count was "into the mid-eighties."

In "Wasted," Judge also describes an exchange with a young woman at a party when talk arose of a friend who puked in a car.

"Do you know Bart O'Kavanaugh?"

"I heard he puked in someone's car the other night."

"Yeah. He passed out on his way back from a party."

CNN has no confirmation that the Bart O'Kavanaugh mentioned in the passage above refers to Brett Kavanaugh.

"We are not commenting at this time," Judge's attorney, Barbara Van Gelder, told CNN in response to questions about the book.

In Judge's book, there was also another reference to a student falling through a ceiling at a house party at Judge's house. The same student was busted by the cops for drunk driving, Judge wrote.

Christine Blasey Ford has accused Kavanaugh of assaulting her in the early 1980s, and said Judge was also in the room. Judge denied the incident and his lawyer said he has no plans to speak publicly.

"I have no memory of this alleged incident," Judge said this week in a statement sent by Van Gelder. "Brett Kavanaugh and I were friends in high school but I do not recall the party described in Dr. Ford's letter. More to the point, I never saw Brett act in the manner Dr. Ford describes."

Kavanaugh has been defiant in his rebuking of Ford's allegations.

"I categorically and unequivocally deny this allegation. I did not do this back in high school or at any time," he said.

CNN has seen a copy of Kavanaugh's 1983 high school senior yearbook, provided by a former student who wanted to stay anonymous.

In it, Kavanaugh wrote a handful of entries about drinking in his yearbook entry at Georgetown Prep, in Maryland. In those references, he said he was a member of the "Beach Week Ralph Club" and Treasurer of "Keg City Club."

Other friends have also come forward in recent days.

Meghan McCaleb, a high school friend of Kavanaugh's, who helped put together a letter of support for Kavanaugh, told CNN's Jim Sciutto that this was not an accurate portrayal of the Supreme Court nominee in the 1980s.

"I've been friends with him for years and I was one of the people who gathered women together ... 65 women ... all said that he always was a gentleman, always respected women and nothing like that has ever happened," she said.

"He would have a couple of beers, but he never, ever was out of control ever, and I always felt he was one of the more mature ones of that group of friends."

In another book published by Judge --- "God and Man at Georgetown Prep" -- he describes the 100-keg quest again. He also writes of a bachelor party that he and friends threw for their teacher: a keg of beer and a stripper provided the entertainment at someone's house for the high school students. There was even a "pictorial essay" printed in a student-published paper called the Unknown Hoya -- which appears to be the same as the Heretic -- of the party, including an image of the stripper.

"Prep was a school positively swimming in alcohol, and my class partied with gusto," Judge wrote.