Tests conducted on explosive that hurt man in Central Park 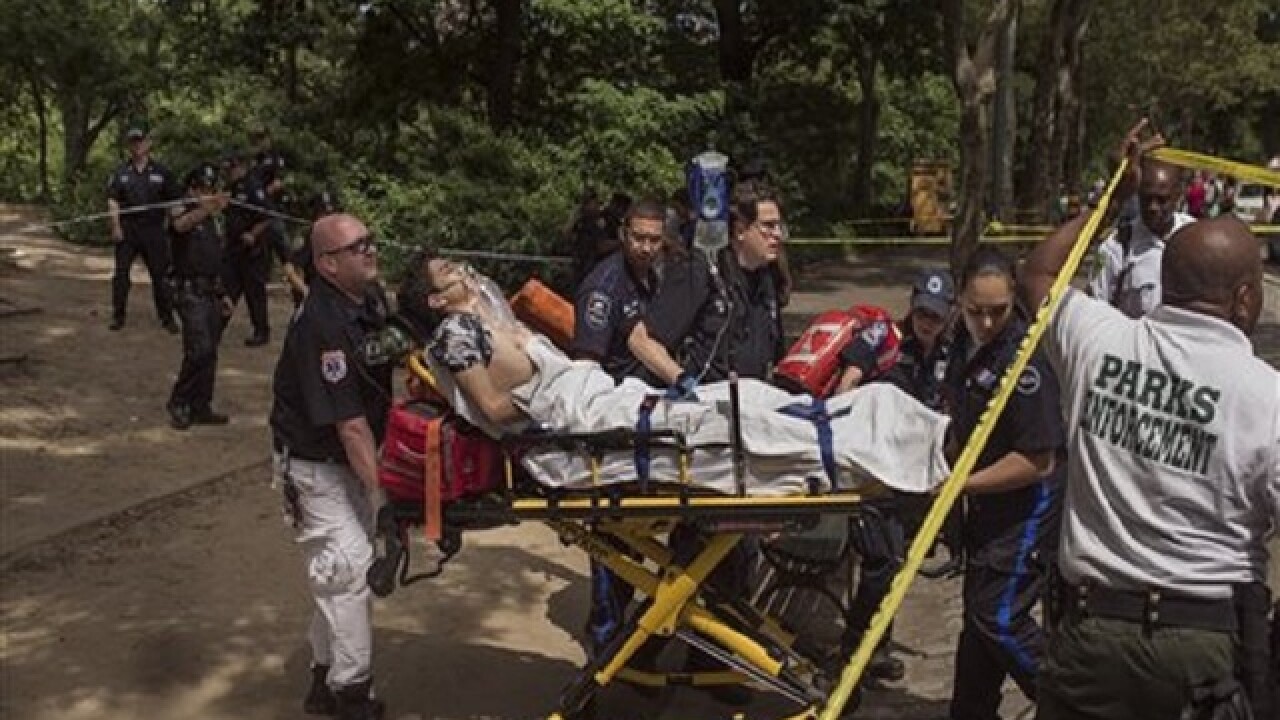 Andres Kudacki
<p>A injured man is carried to an ambulance in Central Park in New York, Sunday, July 3, 2016. Authorities say a man was seriously hurt in Central Park and people near the area reported hearing some kind of explosion. Fire officials say it happened shortly before 11 a.m., inside the park at 68th Street and Fifth Avenue. (AP Photo/Andres Kudacki)</p>

By: Associated Press
Posted at 3:33 PM, Jul 04, 2016
NEW YORK (AP) — Investigators are conducting a forensic examination to identify the explosive compound that blew up in Central Park, seriously injuring the foot of a man who stepped on it, but authorities don't believe the device was designed to intentionally hurt people, police said Monday.
The homemade explosive had been inside a plastic bag when it went off Sunday, said Lt. Mark Torre, commanding officer of the New York Police Department's bomb squad. Investigators believe it was created by "an explosive hobbyist or experimenter" who had some knowledge of chemistry, he said.
The 19-year-old man, who police did not identify, was walking in the park with two friends when he stepped on a rock covering the explosive. He was to undergo surgery to his left foot and was in stable condition at a hospital, fire officials said.
The 11 a.m. blast on the east side of Central Park could be heard for blocks, leaving some with the belief that it was part of a July Fourth celebration.
Investigators don't believe the man who stepped on the firework or his friends were responsible for creating the explosive, and officials asked that anyone with information about it contact the police.
"I believe we have somebody who made this material and maybe wanted to test it," Torre said. "The location that it was found and where it was placed is sort of an ideal location conducive to conducting that kind of experiment."
There was no evidence that the explosion was related to terrorism, and there were no specific, credible threats on New York over the July Fourth weekend, authorities said.
"We've seen a lot of experimentation with homemade fireworks," said Torre, adding that the Central Park explosive may have been designed to go off at an earlier time, even a day before, but for whatever reason did not.
Tourist John Murphy, visiting the city from Connecticut, stayed with the injured man until emergency responders arrived and placed a tourniquet on his leg.
"His left leg was severely damaged, all bone and muscle," Murphy said.
Mayor Bill de Blasio sent out a tweet reminding people to stay safe around fireworks.
"Fireworks are fun — but let's leave them to the professionals," the mayor tweeted.
Copyright 2016 The Associated Press. All rights reserved. This material may not be published, broadcast, rewritten or redistributed.