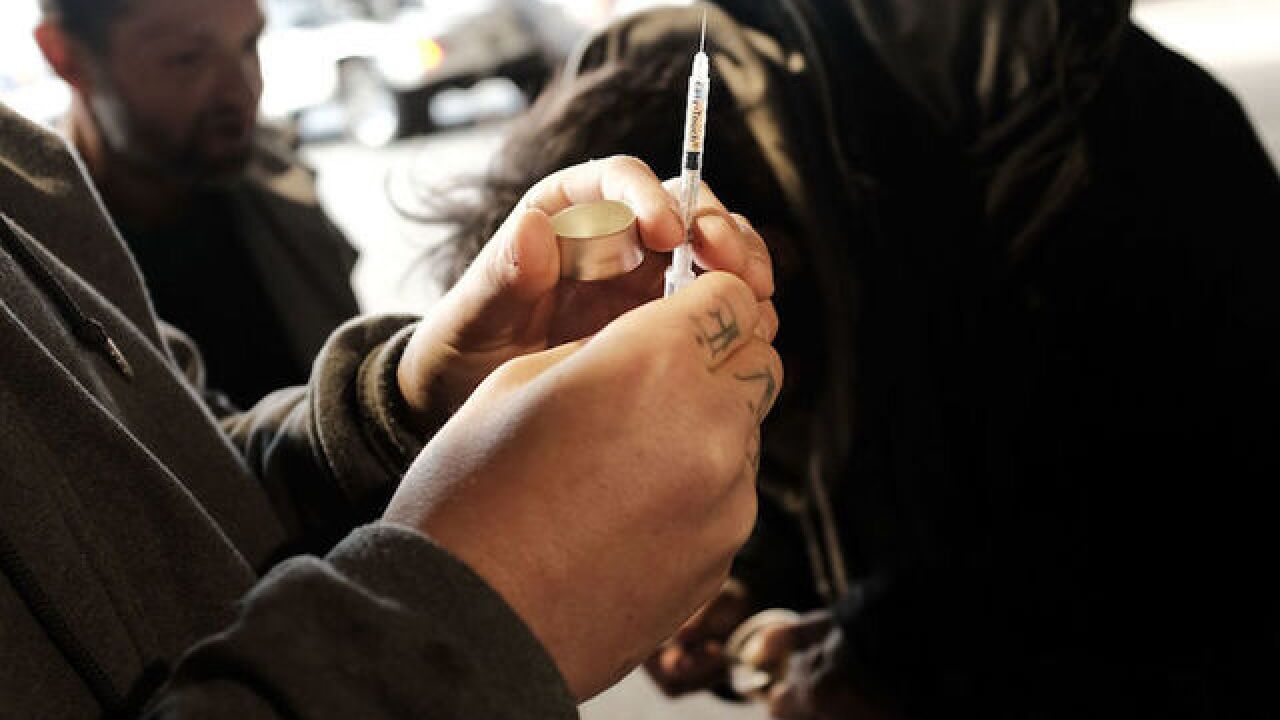 Image copyright 2018 Getty Images. All rights reserved. This material may not be published, broadcast, rewritten, or redistributed.
Spencer Platt
<p>A man uses heroin under a bridge where he lives with other addicts in the Kensington section which has become a hub for heroin use on January 24, 2018 in Philadelphia, Pennsylvania. </p>

In a rare bipartisan move, the Senate is expected to vote Monday on legislation aimed at combating the opioid epidemic that has support from both sides of the aisle.

The package is made up of provisions from five Senate committees and more than 70 lawmakers, and comes after the House passed a similar piece of legislation in June.

This legislation is sponsored by Tennessee Republican Sen. Lamar Alexander, chairman of the Senate Health Committee and includes several initiatives that work to curb the opioid crisis.

"My hope is that the five Senate committees will work quickly with our House colleagues to reach an agreement by September 21, so the House can pass a final opioids package, the Senate can pass it, and we can send it to the President's desk as quickly as possible," Alexander said in a statement last week.

The package has provisions that would give the US Food and Drug Administration the authority to require specific packaging for opioids, as well as a push for research on non-addictive pain killers, according to a previous statement from Alexander.

In 2016, more than 63,600 people died from an overdose in the United States -- and 42,249 of those deaths involved an opioid, according to the Centers for Disease Control and Prevention.

The legislation also includes the "STOP Act," which would attempt to help stop the flow of illegal drugs coming into the United States.

Sen. Rob Portman, an Ohio Republican, introduced the STOP Act based on findings from a year-and-a-half long investigation on the issue conducted by the Senate Permanent Subcommittee on Investigations, he said in a June op-ed.

"The Senate Permanent Subcommittee on Investigations, which I chair, conducted an 18-month investigation that revealed how these drugs can be found through a simple Google search and delivered directly to buyers' doorsteps. We also found that traffickers essentially guarantee delivery through the Postal Service," Portman wrote in the Cincinnati Enquirer , going on to explain that the Postal Service is not required to gather specific data on certain international packages.

Portman continues to argue that although the Postal Service has increased their data gathering for some international packages, it is still "inadequate."

"It will require the Postal Service to get this data for all packages entering the U.S. By closing the loophole in our mail screening and holding the Postal Service to the same standard as private carriers, we can give law enforcement the tools to keep these dangerous synthetic drugs out of our communities," he said.

Trump urged senators to pass the STOP Act in a tweet last month, writing: "It is outrageous that Poisonous Synthetic Heroin Fentanyl comes pouring into the U.S. Postal System from China. We can, and must, END THIS NOW! The Senate should pass the STOP ACT -- and firmly STOP this poison from killing our children and destroying our country. No more delay!"

In addition to the STOP Act, a news release from Alexander notes that the omnibus spending bill from March gave "$4.7 billion directed towards the opioid crisis, including $1 billion for grants to states."

Alexander in a statement said the legislation represents the work of "over 70 senators, five committees, and countless staff who have worked together to help put an end to the opioid epidemic ravaging virtually every American community."

"The House has already passed its version of the act, and there is a bipartisan urgency to work with our House colleagues to get the legislation to the President's desk," the statement later continued.