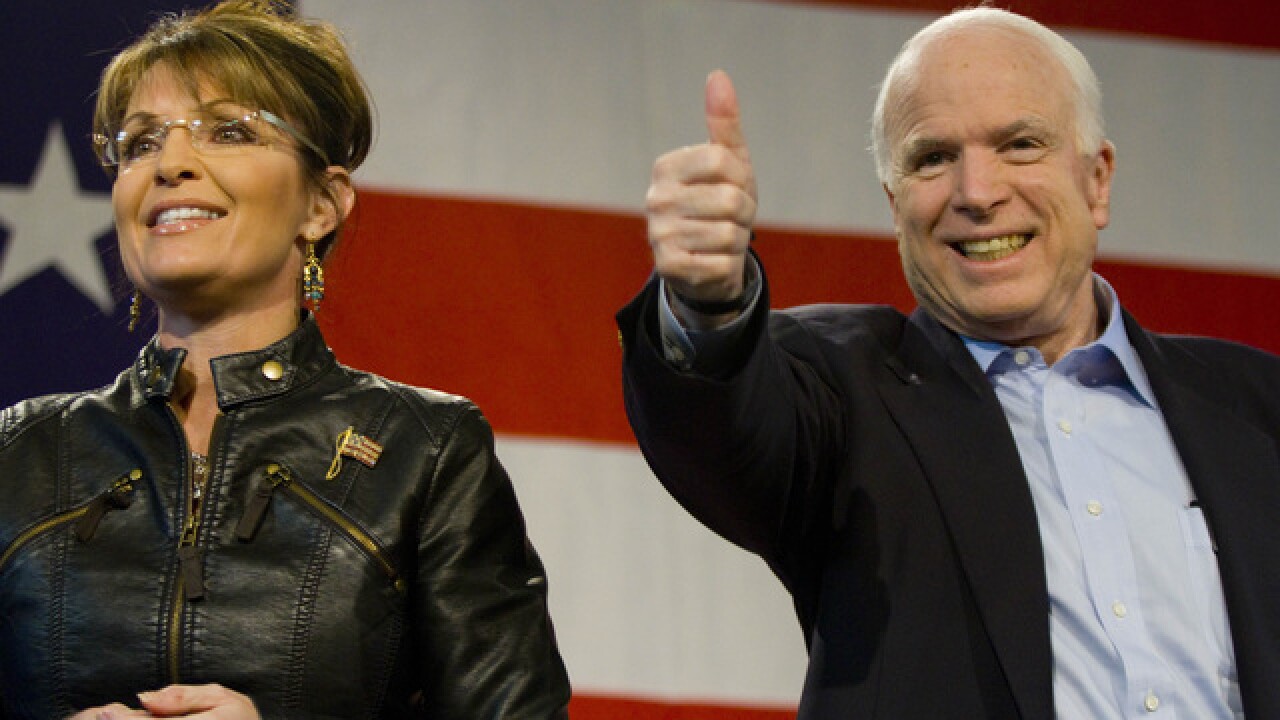 Image copyright 2018 Getty Images. All rights reserved. This material may not be published, broadcast, rewritten, or redistributed.
Darren Hauck
<p>TUCSON, AZ - MARCH 26: U.S. Sen. John McCain (R-AZ) and former Alaska Gov. Sarah Palin (L) attend a campaign rally at Pima County Fairgrounds on March 26, 2010 in Tucson, Arizona. Palin traveled to Arizona to stump for McCain, who is facing a primary challenge in his bid for a fifth term in the Senate. Today's event marked the first time the pair had campaigned together since their failed 2008 presidential run. (Photo by Darren Hauck/Getty Images)</p>

(CNN) — Former Alaska Gov. Sarah Palin is not invited to any of the memorial services for her former running mate, Arizona Sen. John McCain, a source tells CNN.

Palin was rocketed onto the national stage in the summer of 2008 after McCain picked her to be his running mate in the presidential race he would eventually lose to Barack Obama.

Palin mourned McCain in a tweet Saturday night after his death, calling him her "friend."

"Today we lost an American original," Palin tweeted Saturday following McCain's death. "Sen. John McCain was a maverick and a fighter, never afraid to stand for his beliefs. John never took the easy path in life -- and through sacrifice and suffering he inspired others to serve something greater than self. John McCain was my friend. I will remember the good times. My family and I send prayers for Cindy and the McCain family."

A source close to the Palin family tells CNN: "Out of respect for Sen. McCain and his family we have nothing to add at this point. The Palin family will always cherish their friendship with the McCains and hold those memories dear."

McCain said in the months before his death that  he regretted not picking then-Connecticut Sen. Joe Lieberman  as his running mate in 2008. The New York Times  reported  in May that McCain said not choosing Lieberman was "another mistake that I made."

Palin, in response, said to NBC News that she had "a lot of respect" for McCain, but his comments were a "gut punch."

"I don't lie, so I'll tell you -- a bit. You know, I think I described it earlier as a gut punch,"  Palin said at the time . "But again, I'm going to choose to look back on the good times that we did have together."

"It is kind of sad to hear that he and or someone speaking for him does have regrets," Palin added. "And I hope that he finds that kind of peace and contentment also to be able to look back on decisions and realize, really, things work out the way that they're supposed to work out."

McCain died Saturday after a fight with brain cancer that lasted for more than a year. There was a public visitation at the Arizona state Capitol Wednesday.  A memorial service will be held  in his home state Thursday before McCain's body is taken to Washington, DC, that night.

On Friday, McCain will lie in state in the US Capitol for a ceremony before public visitation Friday evening.

On Saturday, a funeral service will be held at the National Cathedral in Washington. While Palin has not been invited to attend, the men who defeated McCain in his two presidential campaigns -- Obama and former President George W. Bush -- will speak at the service.

The final ceremony for McCain will take place on Sunday afternoon at the US Naval Academy in Annapolis, Maryland. He will be buried at the Naval Academy, next to his longtime friend and classmate, Adm. Chuck Larson.