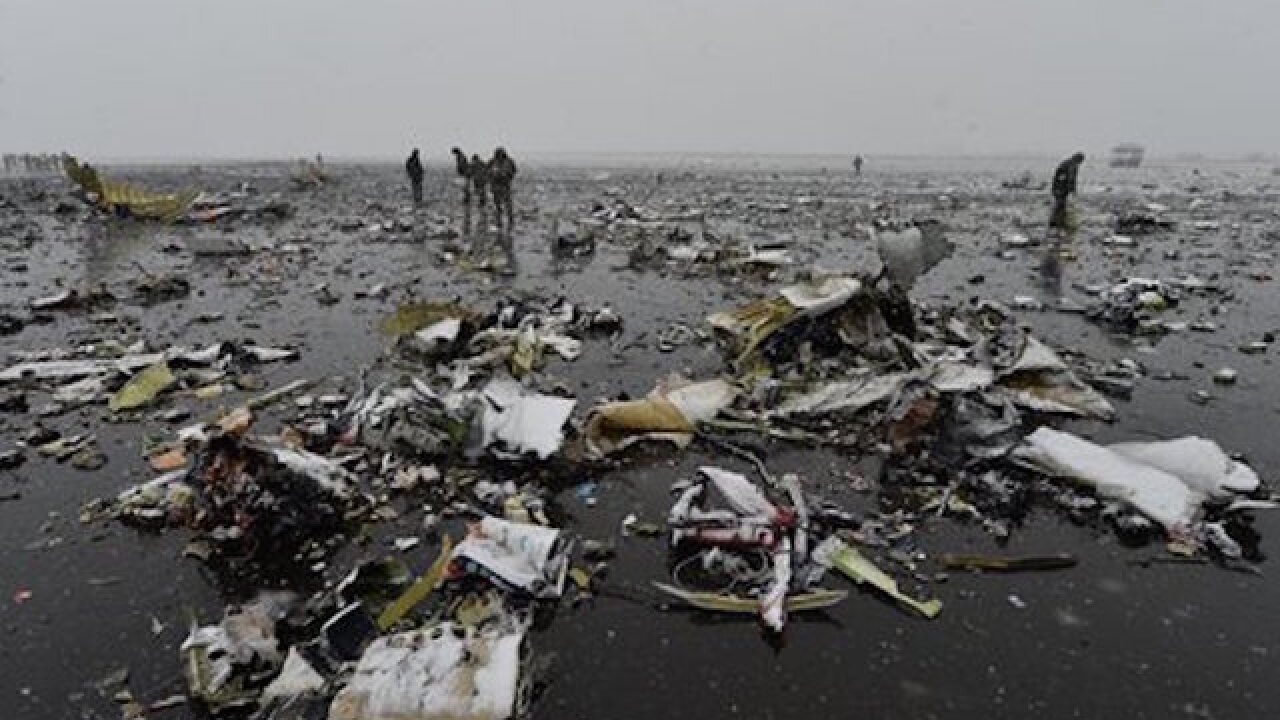 MOSCOW (AP) — A Dubai airliner with 62 people on board nosedived and exploded in a giant fireball early Saturday while trying to land in strong winds in the southern Russian city of Rostov-on-Don, killing all aboard, officials said.

Several planes had trouble landing at the airport at the time of the crash, with one trying to land three times before giving up and diverting to another airport, experts said.

Russia's Emergencies Ministry said the Boeing 737-800 operated by FlyDubai was carrying 55 passengers, most of them Russians, and seven crew members. FlyDubai confirmed there were no survivors and said four children were among those killed.

It was FlyDubai's first crash since the budget carrier began operating in 2009. Its fleet consists of mint 737-800 aircraft like the one that crashed.

Closed-circuit TV footage showed the plane going down in a steep angle and exploding. The powerful explosion left a big crater in the runway and pulverized the plane but investigators quickly recovered both flight recorders. The cause of the crash wasn't immediately known, but officials and experts pointed at a sudden gust of wind as a possible reason.

"By all appearances, the cause of the air crash was the strongly gusting wind, approaching a hurricane level," said Rostov regional Gov. Vasily Golubev.

According to weather data reported by Russian state television, when the FlyDubai plane first tried to land, winds at ground level weren't dangerously strong, but at an altitude of 500 meters (1,640 feet) and higher they reached a near-hurricane speed of around 30 meters per second (67 miles per hour).

Later, when the plane crashed, winds near the surface reached 22 meters per second (49 miles per hour) and could have been even stronger at altitude.

Several planes had landed in Rostov-on-Don shortly before the Dubai airliner was scheduled to touch down, but other flights later were diverted.

Ian Petchenik, a spokesman for the flight-tracking website Flightradar24, told The Associated Press that the FlyDubai plane missed its approach, then entered a holding pattern, circling for about two hours before making another landing attempt. It said a Russian Aeroflot plane scheduled to land around the same time made three landing attempts but then diverted to another airport.

Flightrader24's data indicated that the Dubai plane began climbing again after a go-around when it suddenly started to fall with vertical speed of up to 6,400 meters per minute (21,000 feet/min).

"It was an uncontrollable fall," said Sergei Kruglikov, a veteran Russian pilot, said on Russian state television. He said that a sudden change in wind speed and direction could have caused the wings to abruptly lose their lifting power.

He said the pilots would have understood seconds before the crash that they were going to die, but "passengers and the cabin crew likely didn't realize they were facing imminent death."

FlyDubai CEO Ghaith al-Ghaith said the plane attempted to land in line with established procedures. He added that the pilots hadn't issued any distress call and hadn't attempted to divert to an alternate airport.

"As far as we know, the airport was open and we were good to operate," he said, adding that the plane couldn't have landed without air traffic controllers' permission.

"Our primary concern is for the families of the passengers and crew who were on board. Everyone at FlyDubai is in deep shock and our hearts go out to the families and friends of those involved," he added.

Al-Ghaith said the plane's pilots, who were from Cyprus and Spain, had 5,965 and 5,769 hours of flying time respectively, making them "quite experienced." The cabin crew included two Russians and citizens of the Seychelles, Colombia and Kyrgyzstan.

The plane was built in 2011 and underwent a detailed maintenance inspection known as a C check in January, he added.

President Vladimir Putin offered his condolences to the victims' families and top Russian Cabinet officials flew to the crash site, 60 kilometers (37 miles) from the Russian border with Ukraine, to oversee the investigation.

Alexander Neradko, head of the Russian state civil aviation agency, Rosaviatsiya, said it was up to the pilot to decide if weather conditions allowed the landing and said that traffic controllers in Rostov-on-Don acted in line with standard instructions.

"Our air traffic controllers were acting in full accordance with international rules and there is no reason to talk about any flaws in their work," he said in televised remarks from Rostov-on-Don.

A local online newspaper, Donday.ru, released what it said was the recording of conversations between the Dubai plane's crew and air traffic controllers, in which the pilot, who sounded calm, was inquiring about weather conditions. The authenticity of the tape couldn't be independently confirmed.

"(The airport's) complete overhaul was completed last year, and it has received all the necessary clearances, including international ones," he said.

Pilot Vitaly Sokolovsky told Rossiya 24 television that a sudden gust of wind could be particularly dangerous at low altitude while the plane was flying slowly at low power and the pilot was throttling up the engines to make another attempt at landing.

In a statement expressing "shock and grief," Cypriot President Nicos Anastasiades confirmed that the pilot was a Cypriot, Aristos Socratous from Limassol.

Officials said the plane and bodies of the victims were blown into small pieces by the powerful blast, making identification long and difficult. Investigators, however said the plane's cockpit conversation recorder and another one recording flight data were in satisfactory condition.

The airline was launched in 2008 by the government of Dubai, the Gulf commercial hub that is part of the seven-state United Arab Emirates federation. It has expanded rapidly in Russia and other parts of the former Soviet Union.

Dubai is a popular destination for Russian vacationers, and many Russian expatriates live and work in the city. The carrier has been flying to Rostov-on-Don since 2013. The airline says, in all, it operates more than 1,400 flights a week.

FlyDubai has a good safety record. In January 2015, one of its planes was struck on the fuselage by what appeared to small-arms fire shortly before it landed in Baghdad. That flight landed safely.