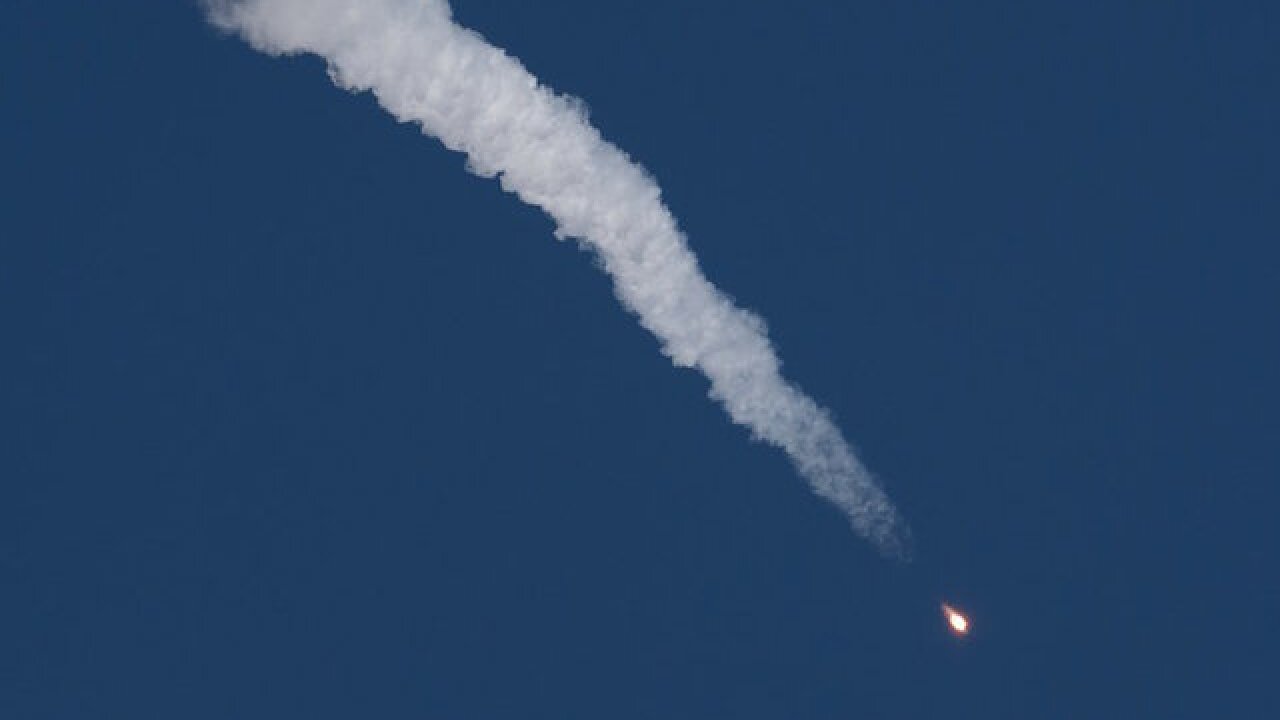 Copyright 2018 Scripps Media, Inc. All rights reserved. This material may not be published, broadcast, rewritten, or redistributed.
NASA
<p>from NASA: The Soyuz rocket is launched with Expedition 57 Flight Engineer Nick Hague of NASA and Flight Engineer Alexey Ovchinin of Roscosmos, Thursday, Oct. 11, 2018 at the Baikonur Cosmodrome in Kazakhstan.</p>

Astronauts on board a Soyuz rocket heading to the International Space Station survived an emergency landing following a booster failure, a Russian space official said Thursday.

"The crew landed," Dmitry Rogozin, director of the Russian space agency Roscosmos, said on Twitter. "All are alive."

The rocket was transporting NASA astronaut Nick Hague and cosmonaut Alexey Ovchinin of Roscosmos for a six-month stay on the ISS.

NASA said its support teams had reached the location where the crew touched down.

"The search and rescue teams have reached the Soyuz spacecraft landing site and report that the two crew members are in good condition and are out of the capsule," NASA tweeted.

The pair will be taken to the Gagarin Cosmonaut Training Center in Star City, outside the Russian capital, Moscow, NASA said.

. @NASA astronaut Nick Hague and Russian cosmonaut Alexey Ovchinin are in good condition following today's aborted launch. I’m grateful that everyone is safe. A thorough investigation into the cause of the incident will be conducted. Full statement below: pic.twitter.com/M76yisHaKF

Dramatic footage showed the capsule carrying the crew as it parachuted back to Earth before thumping down in a plume of dust in Kazakhstan, about 250 miles away from where it took off.

The rocket had launched minutes earlier, at 4:40 a.m. ET, from the country's Baikonur Cosmodrome on a journey that was expected to involve four orbits of the Earth and take six hours.

The Soyuz MS-10 spacecraft was able to separate from the Soyuz-FG rocket booster after the issue emerged, NASA said, and began a ballistic descent.

A ballistic descent is a sharper angle of landing compared to normal, the space agency said. This means the spacecraft would have been traveling faster than usual as it approached Earth.

"I'm grateful that everyone is safe," said NASA administrator Jim Bridenstine. "A thorough investigation into the cause of the incident will be conducted."

Rogozin said Roscosmos was forming a state investigative commission to find out what went wrong. "Telemetry is being studied," he said on Twitter. "Rescue services worked from the first second of the accident."

The emergency rescue system on board the Soyuz "worked normally," Rogozin added.

Hague, who only joined NASA's astronaut corps in 2013, was on his first space mission.

He and Ovchinin were due to join Expedition 57 Commander Alexander Gerst of the European Space Agency, NASA Flight Engineer Serena Auñón-Chancellor and Roscosmos Flight Engineer Sergey Prokopyev on the ISS. They arrived at the station in June.

The Expedition 57 crew members are working on hundreds of experiments in biology, biotechnology, physical science and Earth science, according to NASA.