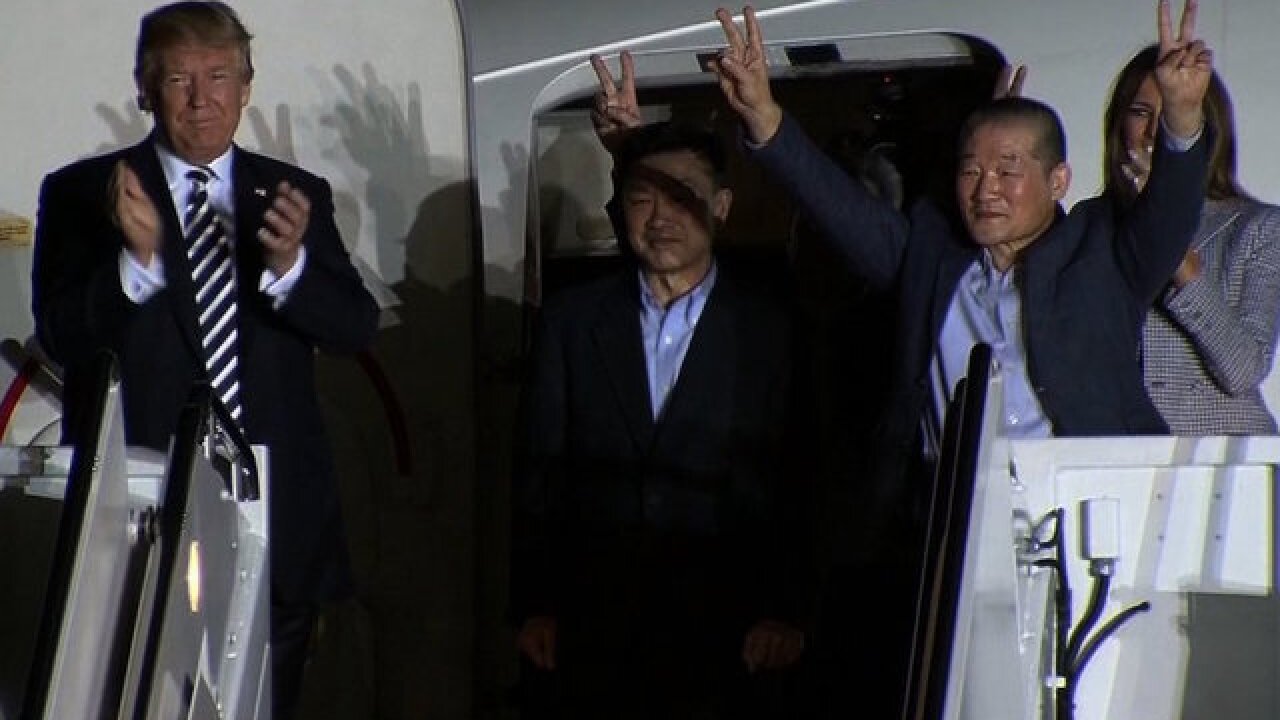 No family members or friends of the three freed Americans were on hand for their arrival in the early hours of Thursday due to protocol reasons, an official told CNN, adding the men had to first debrief intelligence officials before heading to their homes.

Speaking to the media on the tarmac at Joint Base Andrews Air Force Base, Kim Dong Chul said his release felt "like a dream."

President Trump, who was accompanied by his wife Melania, told waiting reporters it was "nice" of the North Korean leader to release the three men ahead of their planned summit.

"Frankly we didn't think this was going to happen ... it's a very important thing to all of us to be able to get these three great people out," he said.

Trump also said he wanted to pay his "warmest respects" to the family of Otto Warmbier, the American who was released by the North Koreans in a vegetative state, only to die days later.

After their meeting with Trump, the three men were expected to go to the Walter Reed Medical Center in Maryland for further evaluation and medical treatment, according to White House Press Secretary Lindsay Walters.

After addressing the return of the three American detainees, Trump was asked about the prospects of making a deal with the North Korean leader.

"I really think he wants to do something and bring his country into the real world," Trump said.

"I think this will be a very big success. It's never been taken this far, there's never been a relationship like this."

Trump has previously said the release of the three men was part of working towards the denuclearization of the Korean Peninsula.

"Some great things can happen, and that's what we hope," he added.

Vice President Mike Pence and his wife Karen Pence were also on hand to welcome the three men home.

Joking with reporters, Trump said the three men's arrivals had probably broken "the all time in history television rating for three in the morning."

The US President had earlier said on his Twitter it would be "quite a scene" when the detainees arrived in Washington.

Rumors had swirled for days around the possibility North Korea might release the three Americans ahead of the summit, especially once Pompeo's visit to Pyongyang was revealed.

Trump had demurred on how likely their return was, telling reporters on Tuesday "we'll all soon be finding out." "It would be a great thing if they are," he added.

The three former detainees issued a joint statement on Wednesday thanking Trump for their release. "We would like to express our deep appreciation to the United States government, President Trump, Secretary Pompeo, and the people of the United States for bringing us home," the trio said.

While both South Korea and Japan welcomed the news of the Americans' release, the two countries are still waiting for word on their own citizens held or abducted by North Korea.

Japanese Prime Minister Shinzo Abe has repeatedly pushed for Trump to raise the issue of repeated abductions of Japanese citizens by North Korea in his upcoming meeting with Kim Jong Un. More than a dozen abductees still remain missing, according to the Japanese government.

CNN reported Wednesday that administration officials have been instructed to move forward with plans to convene that meeting in Singapore, according to two people familiar with the plans.

Trump said on Wednesday he would announce the location and the timing of the summit in three days time, after repeatedly teasing the meeting date had been set. The two leaders are expected to meet sometime in June.

It will be the first meeting ever between a sitting US President and a North Korean leader, with both men meeting to discuss denuclearization of the Korean Peninsula.

Other locations had been under discussion, including Mongolia and the Korean demilitarized zone (DMZ), but experts said Singapore's neutral but opulent setting was likely to work in its favor.

It comes less than two months after a historic summit between Kim Jong Un and South Korean President Moon Jae-in on April 27 in the DMZ, where Kim became the first North Korean leader to set foot in the South since 1953.

The White House Wednesday said they viewed the action to release the Americans as a "gesture of good will."