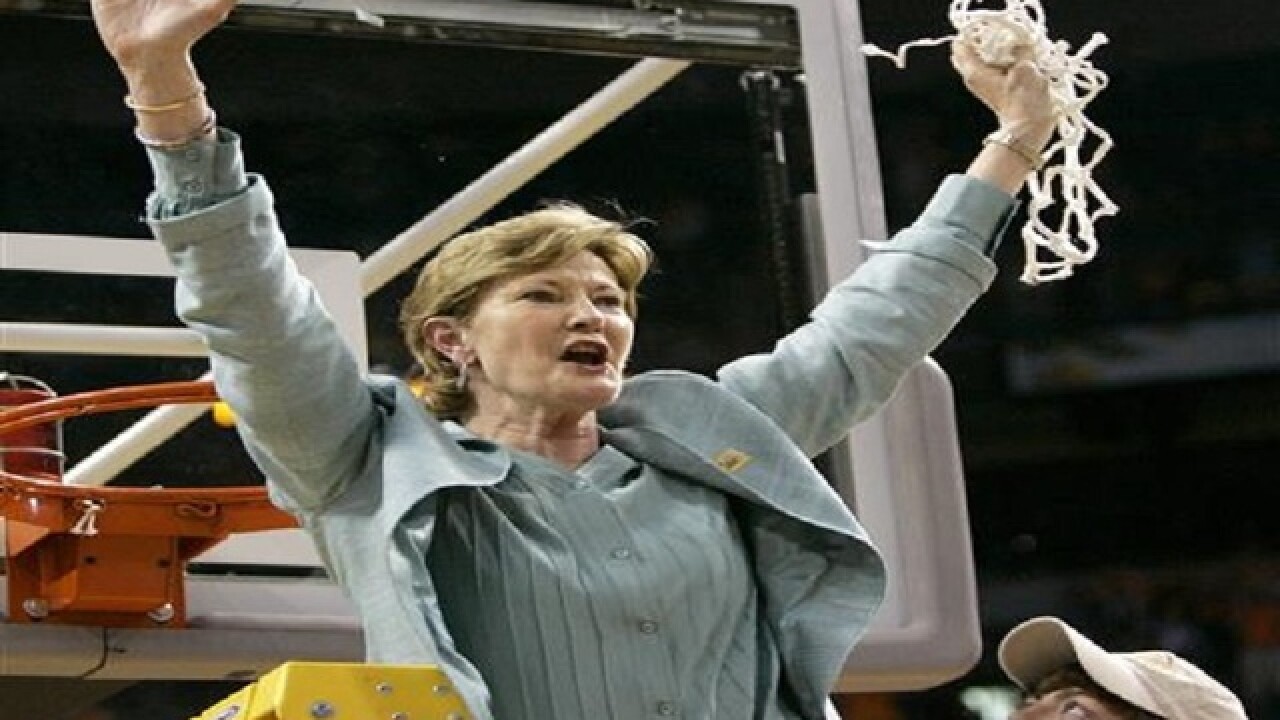 Dozens of Pat Summitt's former Tennessee players and coaches descended on Knoxville over the weekend, making the basketball pilgrimage to say their final goodbyes to the winningest coach in Division I college basketball history.
Summitt, who died Tuesday morning at age 64, was much more than just their coach. She was a role model, a second mother, a friend, a mentor.
WNBA stars Candace Parker and Tamika Catchings knew they had to see her one more time. So they flew in over the weekend between WNBA games.
"She's touched so many lives in the game of basketball and has grown the game," Parker said. "She's changed the way women's basketball is played. She's changed the nature of women's basketball. She changed the way I looked at life.
"She's not a person that just talks the talk, she walks the walk as well."
Catchings said the biggest thing that Summitt taught her was integrity.
"Have integrity in everything you do," Catchings said Tuesday.
"I was blessed to have the opportunity to have such an amazing role model and such an amazing mentor, sister and friend," she added. "To have the opportunity to be around someone like her (was special)."
Summitt came to watch Catchings win her only WNBA title in 2012. It meant the world to Catchings as she embraced her coach after the series clinching game.
Catchings went with her mom to see Summit toward the end of last year. She knew she had to see her one more time before she died.
"Selfishly, I wish she was here," Catchings said. "When I think about it, I'm glad that she is free."
Basketballs, orange and white balloons and flowers were left in front of her statue on Tennessee's campus Tuesday. Summitt's family plans a private funeral and burial but will hold a celebration of her life July 14 at Thompson-Boling Arena, where the court is named after the former coach.
"She's the most important figure in the history of the sport," former Tennessee player Kara Lawson said. "Her impact, she forever changed the sport, and her impact will always be felt by any player that plays the game. Anybody that loves the game of basketball owes a debt of gratitude to her. You think of how far the women's game has come, how normal it is to watch women play on TV, how normal it is for a young boy to look up to a young woman. That wasn't normal."
Summitt helped grow women's basketball as her Lady Vols dominated the sport in the late 1980s and 1990s, winning six titles in 12 years. She made people care about the game.
"I think she brought the women's college game from the back page to the front page," Los Angeles Sparks coach Brian Agler said. "Tennessee was the foundation that the modern era of women's basketball was built on."
In 1995 when she played UConn in a national televised game, the AP held its women's basketball poll until the game ended — the first and only time that's happened in the poll's 40-year history. Tennessee and Connecticut had the best rivalry in the sport over the next dozen years before it ended. UConn coach Geno Auriemma put Summitt's impact succinctly when he said Monday:
"Our sport is synonymous with Pat Summitt, and Pat Summitt is synonymous with women's basketball."
Tennessee — the only school she coached — won NCAA championships in 1987, 1989, 1991, 1996-98 and 2007-08. Summitt, who won eight NCAA championships overall, had a career record of 1,098-208 in 38 seasons, plus 18 NCAA Final Four appearances.
But a stat that was really important to the Hall of Fame coach during the 38 years she coached at Tennessee: graduation rate.
"It was huge for her," said Holly Warlick, who took over for Summitt as coach of Tennessee and also played for her. "You were not going to step on the floor if you missed a class, her rules were very simple. We still use them today.
"You sit in the first three rows. If you miss a class, you miss a game. ... She never wavered. We still have a 100 percent graduation rate."
Copyright 2016 The Associated Press. All rights reserved. This material may not be published, broadcast, rewritten or redistributed.