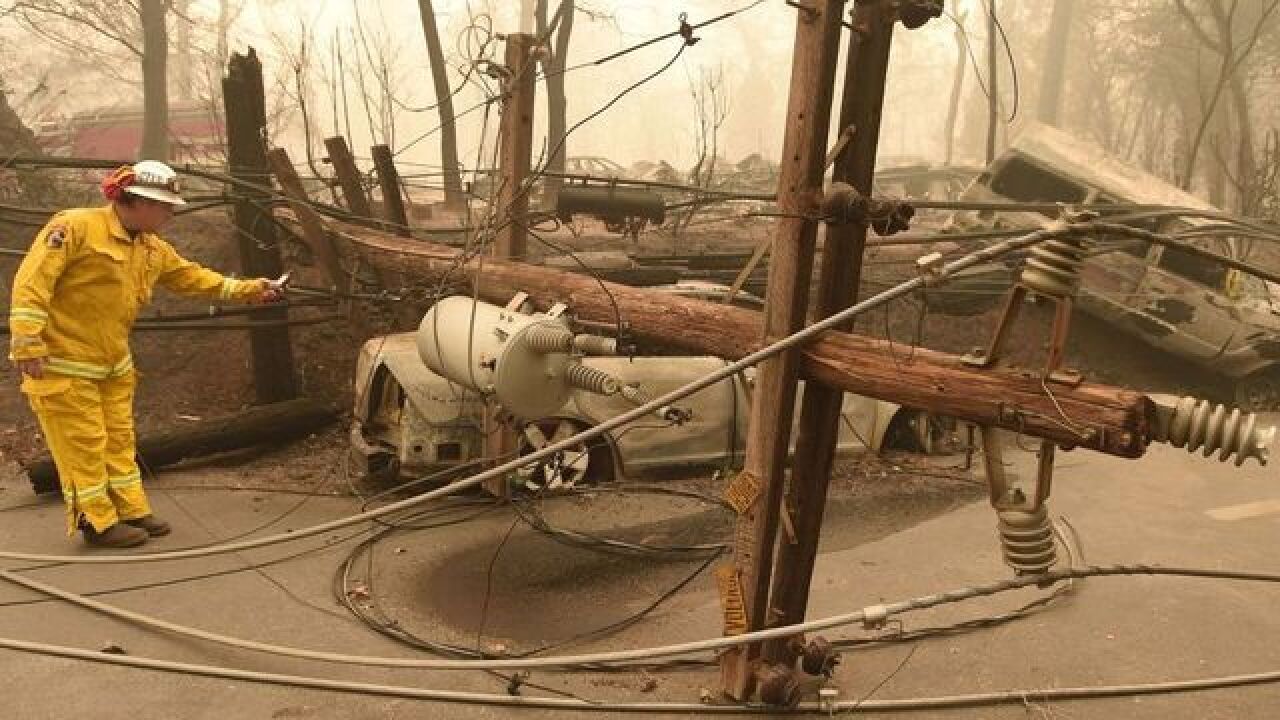 If California electric utility PG&E is responsible for  California's wildfires , it may not be able to afford the payouts it would owe.

PG&E disclosed in a regulatory filing Tuesday that it "experienced an outage" on a transmission line in Butte County at 6:15 a.m. on November 8 -- just 15 minutes before the Camp Fire that has so far claimed 48 lives broke out.

PG&E said the cause of  the fire  is still under investigation. But if its equipment is found to be responsible for it, PG&E "could be subject to significant liability in excess of insurance coverage" and that this could have "a material impact" on its financial results.

The utility renewed its liability insurance coverage for wildfire events for an amount of approximately $1.4 billion that covers the period from August 1, 2018 through July 31, 2019, the company said in the  SEC filing .

But the fire is far from being under control, which means more damage is likely. PG&E said in the filing that the California Department of Forestry and Fire Protection estimates the fire won't be fully contained until November 30.

The damages alone could cost up to $6.8 billion. according to a report from Moody's this week.

PG&E may not have enough to cover the cost that, let alone any legal fees or fines it might have to pay. The utility said in its filing that it currently has $3.46 billion in cash after borrowing from an existing revolving credit line.

Shares of PG&E ( PCG ) plunged more than 30% Wednesday following this disclosure and were briefly halted for volatility. The stock has now fallen by half since the Camp Fire began.

The utility could need another bailout from the state of California if it's found to be liable for the Camp Fire.

Governor Jerry Brown signed a bill in September that lets PG&E issue bonds backed by surcharges from the utility's customers. Those bonds would help pay for damages tied to deadly California wildfires in October 2017 caused by faulty PG&E equipment.

The bill allows for the possibility that utilities could issue similar bonds for future fires, but that is not guaranteed.

PG&E already faces one lawsuit on behalf of victims of the Camp Fire.

A group of law firms that has dubbed itself the Northern California Fire Lawyers filed a suit Tuesday on behalf of Camp Fire survivors.

The firms allege in the suit that "PG&E was negligent in failing to maintain its infrastructure and properly inspect and manage its power transmission lines."

A spokesperson for PG&E told CNN Business that "it's important to remember that the cause has yet to be determined."

"We are aware of lawsuits regarding the Camp Fire. Right now, our primary focus is on the communities, supporting first responders and getting our crews positioned and ready to respond when we get access, so that we can safely restore gas and electricity to our customers," the spokesperson added.