Pence tries to win over conservatives despite Trump gaffes 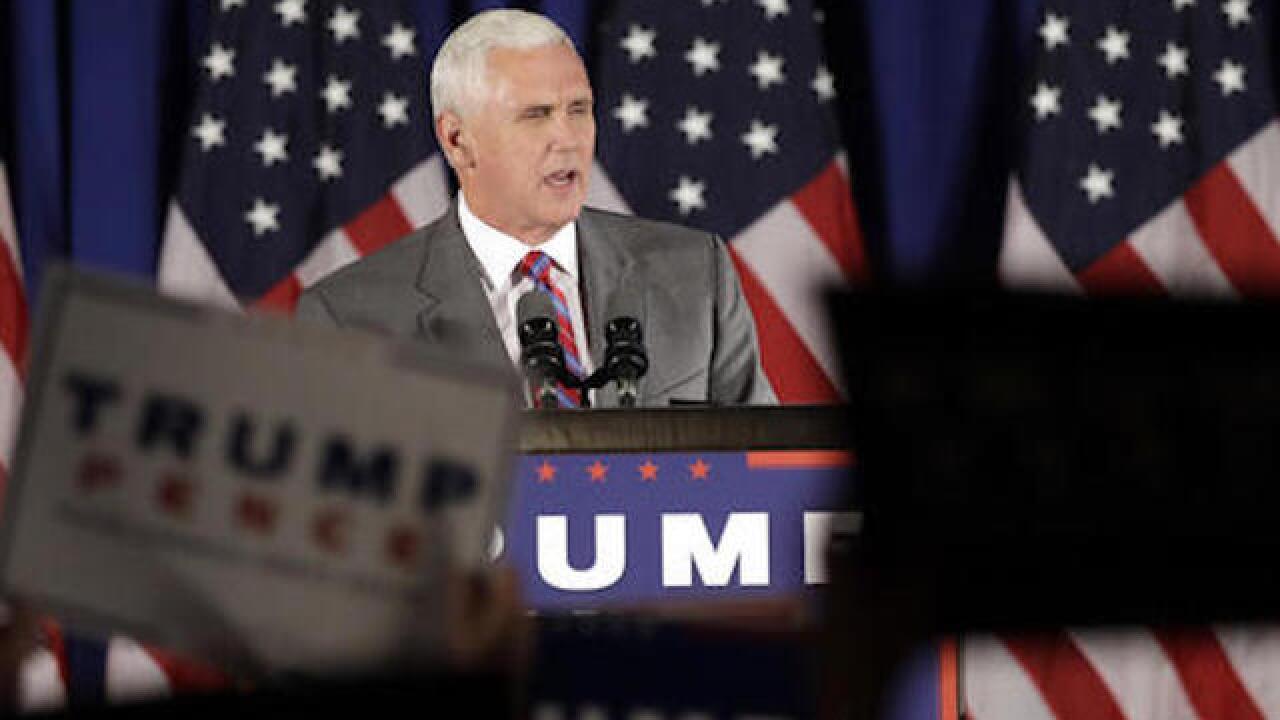 INDIANAPOLIS (AP) — Since his selection as Donald Trump's running mate, Mike Pence has tried to stay focused on winning over conservatives skeptical of the New York billionaire.

His new boss keeps getting in the way.

On several occasions in the past week, the Indiana governor has found himself in direct conflict with Trump, taking a different campaign tact or running damage control after one of the Republican presidential nominee's incendiary remarks. The latest came Wednesday, when Pence offered an unqualified endorsement of House Speaker Paul Ryan's re-election bid a day after Trump refused to endorse Ryan.

The early days of the general election campaign have been a contortionist act for Pence, who has remained loyal to Trump while trying to maintain his reputation as a principled, down-to-earth Midwesterner with the primary mission of acting as an emissary to the conservative and evangelical wings of the Republican Party.

The first noticeable split between nominee and running mate came during the Democratic convention, when Trump encouraged Russia to find and make public missing emails deleted by Hillary Clinton from the private servers she used while secretary of state.

At roughly the same time, Pence blasted Russia in a statement issued by the campaign that said "the United States government will ensure there are serious consequences" if Russia is "interfering in our elections."

Last weekend, Pence, whose only son is a U.S. Marine, sought to quell the uproar Trump created by lashing out at Capt. Humayun Khan's parents, who appeared at the Democratic convention and have criticized Trump's anti-Muslim rhetoric. Their son was killed in Iraq.

In a statement, Pence said he and Trump believe Khan is "an American hero" and said "his family, like all Gold Star families, should be cherished by every American." He then shifted gears to praise Trump, who he said will "support our military and their families" and "defeat the enemies of our freedom."

He backed up those remarks at a Monday evening town hall meeting in Nevada, when the audience jeered a woman who asked how he can tolerate what she called Trump's disrespect of American servicemen.

Trump, meanwhile, wrote on Twitter that day: "Mr. Khan, who does not know me, viciously attacked me from the stage of the DNC and is now all over TV doing the same... Nice!"

On Tuesday, Pence held a meeting with Arizona Sen. John McCain — a day after the former prisoner of war said Trump did not have "unfettered license to defame those who are the best among us," and hours after Trump responded by telling The Washington Post he would not endorse McCain's re-election.

In that same interview, Trump also refused to endorse Ryan, who faces a primary election next week. On Wednesday, Pence had a very different message.

"I'm very confident after Donald Trump is elected president and Paul Ryan is re-elected to Congress ... these two men are going to do great things," Pence said in an interview with Fox News Channel. "I talked to Donald Trump this morning about my support for Paul Ryan and our longtime friendship. He strongly encouraged me to endorse Paul Ryan."

While Trump has been openly hostile toward members of the media, Pence has struck a conciliatory tone. He recently gave a reporter in his traveling press entourage cupcakes for her birthday. And after law enforcement and local volunteers barred a Washington Post reporter from entering a rally in Wisconsin, Pence said on conservative commentator Hugh Hewitt's radio show the campaign would evaluate its policy and added that events would be "available to the media, whether they're fair or unfair."

Campaign spokesman Marc Lotter didn't respond to a request to interview Pence about his relationship with Trump. He also would not answer questions about the Indiana governor's approach to dealing with the fallout from Trump's remarks.

But there are no outward signs that Trump has any issues with Pence, or that his statements come as a surprise to the candidate at the top of the ticket. Two people familiar with the campaign's inner workings said the official statements and tweets from Pence are approved at campaign headquarters. They spoke on condition of anonymity, because they were not authorized to discuss the matter publicly.

"He's staying consistent with his character and he's not changing who he is, but he's also careful not to criticize his spouse," said Murphy, who has known Pence for nearly 30 years.

And Trump's voters don't seem to mind the differences.

Jeanne Eskew, who attended a recent Pence rally in Grand Rapids, Michigan, said she hopes Pence can "balance" Trump out.

"I really like Mike Pence. I feel like he's real," said Eskew, a 54-year-old former Ben Carson supporter from Holland, Michigan. "For people who are on the fence, he's very credible."