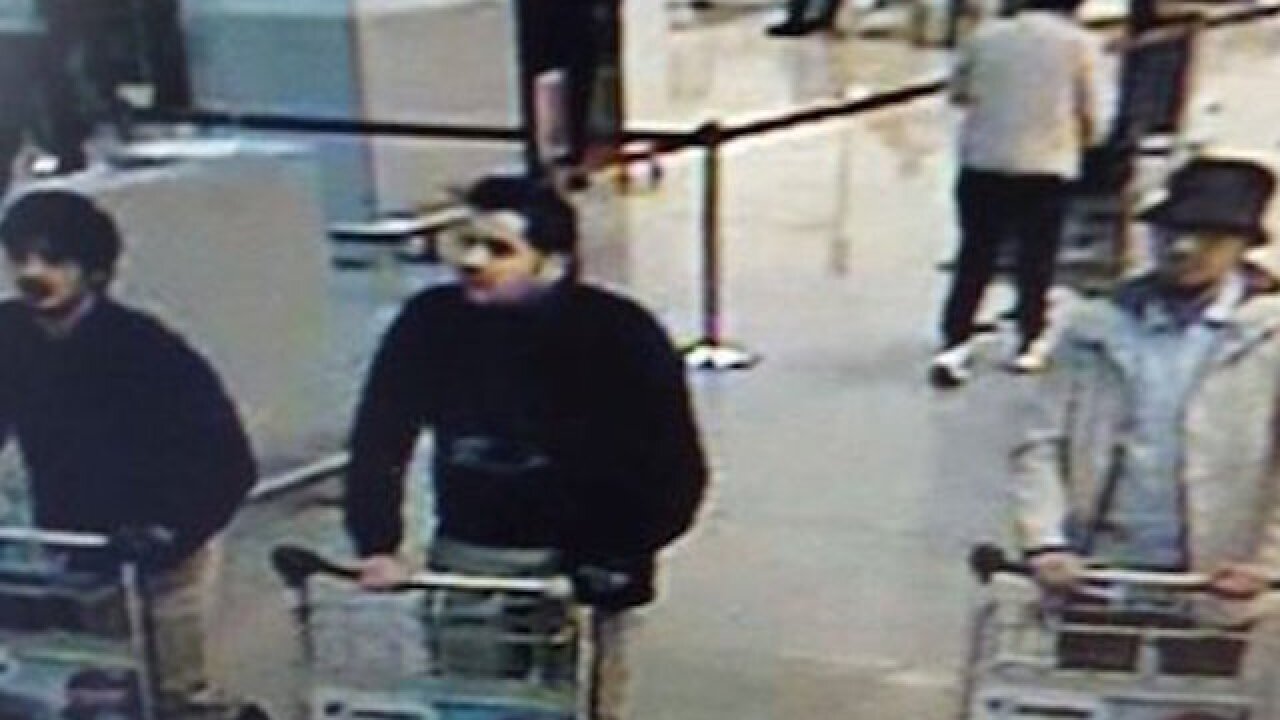 <p>In this image provided by the Belgian Federal Police in Brussels on Tuesday, March 22, 2016 of three men who are suspected of taking part in the attacks at Belgium's Zaventem Airport. The man at right is still being sought by the police and two others in the photo that the police issued were according to a the Belgian Prosecutors 'probably' suicide bombers. Bombs exploded at the Brussels airport and one of the city's metro stations Tuesday, killing and wounding scores of people, as a European capital was again locked down amid heightened security threats. (Belgian Federal Police via AP)</p>

BRUSSELS (AP) — The suspected bombmaker in the Paris attacks in November was one of two suicide bombers who targeted the Brussels airport, officials said Wednesday, in a new sign that both attacks are linked to the same cell of the Islamic State group.

The revelation that Najim Laachraoui was among the bombers came as Belgians began three days of mourning for the victims of the Brussels airport and subway bombings. The country remained on high alert as authorities hunted for one of the suspected attackers seen on surveillance video with Laachraoui and one other suicide bomber.

Turkish authorities, meanwhile, said they had caught one of the suicide bombers near the Turkish-Syrian border in July and sent him back to the Netherlands, warning both that country and Belgium that he was a "foreign terrorist fighter." But a Turkish official who spoke on condition of anonymity because he wasn't authorized to speak publicly said the bomber was allowed to go free because Belgian authorities could not establish any ties to extremism.

Belgian authorities had been looking for Laachraoui since last week, suspecting him of being an accomplice of top Paris attacks suspect Salah Abdeslam, who was arrested on Friday.

Two officials told The Associated Press that Laachraoui's DNA was verified as that of one of the suicide bombers Tuesday, after samples were taken from remains found at the blast site at Brussels airport. One European official and one French police official spoke on condition of anonymity because they weren't authorized to divulge details of the Belgian investigation. Both officials were briefed on the investigation.

Laachraoui is believed to have made the suicide vests used in the Paris attacks, a French police official told The Associated Press, adding that Laachraoui's DNA was found on all of the vests as well as in a Brussels apartment where they were made. The official spoke on condition of anonymity because he wasn't authorized to discuss an ongoing investigation.

Several people who may be linked to the attacks were still on the loose and the country's threat alert remained at its highest level, meaning there was danger of an imminent attack, said Paul Van Tigchelt, head of Belgium's terrorism threat body. The attacks killed 31 people, not including three suicide bombers, and injured 270 others, authorities said.

As government offices, schools and residents held a moment of silence to honor the dead, the mood was defiance mixed with anxiety that others involved in the attacks are still at large.

Investigators raided the Brussels neighborhood of Schaerbeek after the attacks and found a computer in a trash can on the street including a note from Ibrahim El Bakraoui saying he felt increasingly unsafe and feared landing in prison. He was the brother who Turkish officials said was deported from Turkey to the Netherlands. Belgium's justice minister said authorities there knew him as a common criminal, not an extremist, and that he was sent back to the Netherlands, not Belgium.

A taxi driver who took Ibrahim El Bakraoui and two others to the airport led investigators to an apartment where they found 15 kilograms (33 pounds) of TATP explosives, along with nails and other materials used to make bombs, Van Leeuw said.

Two were suicide bombers, the prosecutor said; the other was a man in a white jacket and black cap who fled before the bombs went off, leaving behind a bag full of explosives. That bag later blew up, but no one was injured.

The Islamic State group, which was behind the Paris attacks, has also claimed responsibility for the Brussels bombings.

Belgian state broadcaster RTBF, citing sources it didn't identify, said Khalid El Bakraoui had rented an apartment that was raided last week in an operation that led authorities to Abdeslam.

Abdeslam was arrested Friday in the Brussels neighborhood where he grew up, a rough place with links to several of the attackers who targeted a Paris stadium, rock concert and cafes on Nov. 13. Those attacks killed 130 people.

A Belgian official working on the investigation told the AP that it is a "plausible hypothesis" that Abdeslam was part of the cell linked to the Brussels attack. The official spoke on condition of anonymity because he wasn't authorized to publicly discuss an ongoing investigation.

French and Belgian authorities have said in recent days that the network behind the Paris attacks was much larger than initially thought — and developments this week suggest the same group could have staged both the Paris and Brussels attacks.

The airport and several Brussels metro stations remained closed Wednesday, and authorities said the airport would remain closed at least through Thursday, forcing the cancellation of 600 flights each day. Security forces stood guard around the neighborhood housing the headquarters of European Union institutions, as nervous Brussels residents began returning to school and work under a misty rain.

Thousands of people gathered at Place de la Bourse in the center of downtown Brussels — including dozens of students chanting "stop the war" — in solidarity with those killed.

"In Belgium, it's not every day that we show solidarity politically," said Fanny Nicaise, 24. She came out with some friends just to see and be with others. "It's important that you aren't alone in your sadness."

Belgians paid homage and lit candles, the mood almost buoyant as people wrote on the ground with big sticks of chalk, drawing peace signs and hearts.

As befits an international city like Brussels, the foreign minister said the dead collectively held at least 40 nationalities.

"It's a war that terrorism has declared not only on France and on Europe, but on the world," French Prime Minister Manuel Valls said Wednesday on Europe-1 radio. Valls, who planned to visit Brussels later Wednesday, urged tougher controls of the EU's external borders.

"We must be able to face the extension of radical Islamism ... that spreads in some of our neighborhoods and perverts our youth," he said. The Paris attackers were mainly French and Belgian citizens of North African descent, some from neighborhoods that struggle with discrimination, unemployment and alienation.

In its claim of responsibility, the Islamic State group said its members detonated suicide vests both at the airport and in the subway, where many passengers fled to safety down dark tunnels filled with hazy smoke from the explosion. IS warned of further attacks, issuing a statement promising "dark days" for countries taking part in the U.S.-led anti-IS coalition in Syria and Iraq.

European security officials have been bracing for a major attack for weeks and had warned that IS was actively preparing to strike.

Valls said Wednesday that big events, be they sports or cultural, must not be put on hold for fear of attacks. He said that includes the Euro 2016 soccer tournament, a monthlong event being held in France that starts in June. Meanwhile, the Belgian football federation announced that it was calling off an international soccer friendly match against Portugal next week because of the attacks.