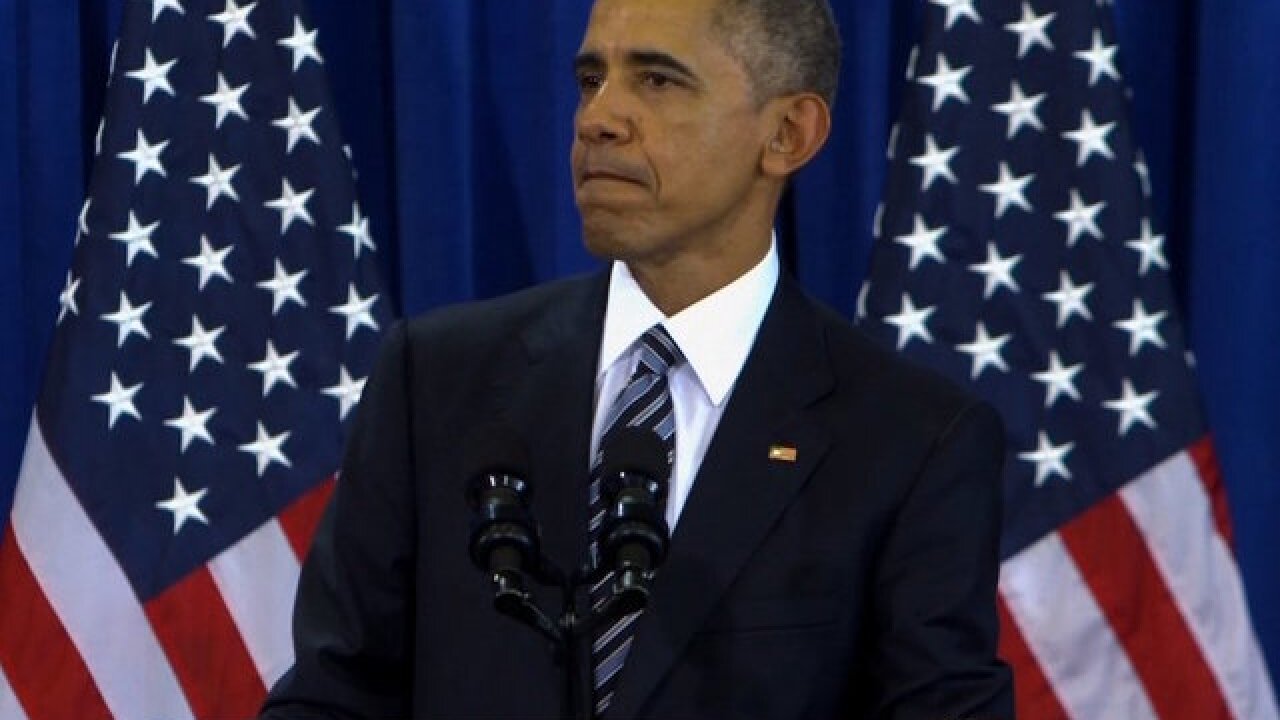 CNN
POOL
<p>President Barack Obama is providing a final summation of his national security record Tuesday, reaffirming his counterterrorism strategy even as his successor has threatened to reverse course on many of Obama's priorities.</p>

"The President has directed the Intelligence Community to conduct a full review of what happened during the 2016 election process. It is to capture lessons learned from that and to report to a range of stakeholders," she said at a Christian Science Monitor breakfast with reporters. "This is consistent with the work that we did over the summer to engage Congress on the threats that we were seeing."

Monaco said the administration would be mindful of the consequences of revealing the results of their review publicly. All of the Democratic senators on the Senate Intelligence Committee have called on Obama to declassify intelligence on Russia's actions during the election.

"You want to do so very attentive to not disclosing sources and methods that would impede our ability to identify and attribute malicious actors in the future," Monaco said of disclosure.

The review is intended to be done before Donald Trump's inauguration on January 20, Monaco said. "He expects to get a report prior to him leaving office."

In response to the news, the Russian government called for evidence of its involvement, denying claims made by the US.

"We are also very interested in understanding what they accused Russia of," said Foreign Ministry spokeswoman Maria Zakharova. "Many times the Ministry of Foreign Affairs and Foreign Minister Lavrov have asked Americans to provide full information. But never had any response."

The US government before the election publicly blamed senior levels of the Russian government for cyberattacks designed to influence the outcome, including hacks of Democratic groups like the Democratic National Committee.

A steady stream of documents and internal emails from Democratic groups and from Hillary Clinton's campaign chairman were released in the weeks and months leading up to the election, with damaging consequences for Democrats.

There was also concern about attempted attacks on voter registration systems at the state and local level, though the intelligence community never said there was strong evidence that was tied to the Russian government. Voter registration databases are attractive targets for financially motivated hackers, as well.

Questions have remained about the extent of the hacking and Russians' motivations. While the intelligence community has not suggested the attacks were designed to bolster President-elect Donald Trump, the impact of the hacks were much more damaging to Democrats and to Clinton.

Trump has continually denied a Russian role in the hacking, despite the overwhelming consensus from private sector cybersecurity firms that investigated the hacks and from the various US government intelligence agencies.

Members of his own party have strongly pointed the finger at Russia, and Republican Sens. John McCain and Lindsey Graham are reportedly leading the charge among Republicans to investigate the hacking, according to The Washington Post, and Graham has told CNN he intends to be unrelenting.

"I'm going after Russia in every way you can go after Russia," Graham told CNN. "I think they're one of the most destabilizing influences on the world stage, I think they did interfere with our elections, and I want Putin personally to pay a price."

House Intelligence Committee Chairman Devin Nunes said Russian interference was real, but dinged the administration for being slow to react.

"Russia's cyber-attacks are no surprise to the House Intelligence Committee," Nunes said in a statement. "Unfortunately the Obama administration, dedicated to delusions of 'resetting' relations with Russia, ignored pleas by numerous Intelligence Committee members to take more forceful action against the Kremlin's aggression. It appears, however, that after eight years the administration has suddenly awoken to the threat."

Democrats were quick to praise Obama on Friday and pressured Trump to change his tune.

"Defending our elections from foreign meddling is more important than any political party's advantage or disadvantage," House Minority Leader Nancy Pelosi said in a statement. "Any Administration should be deeply troubled by Russia's attempt to tamper with our elections."

The top Democrat on the House Intelligence Committee, California Rep. Adam Schiff, praised the administration for its move and called on the White House to declassify as much as it could.

"Given President-elect Trump's disturbing refusal to listen to our intelligence community and accept that the hacking was orchestrated by the Kremlin, there is an added urgency to the need for a thorough review before President Obama leaves office next month," Schiff said in a statement. "More than that, the administration must begin to take steps to respond forcefully to this blatant cyber meddling, and work with our allies in Europe who have been targets of similar attacks to impose costs on the Kremlin; if we do not, we can expect to see a lot more of this in the near future."

Oregon Sen. Ron Wyden, a Democrat on the Senate Intelligence Committee, called the President's move "constructive" and said he has no doubt about the Moscow's role.

Monaco declined to draw conclusions before the review was complete.

"We'll see what comes out of the report. There will be a report to a range of stakeholders, including Congress," she said.