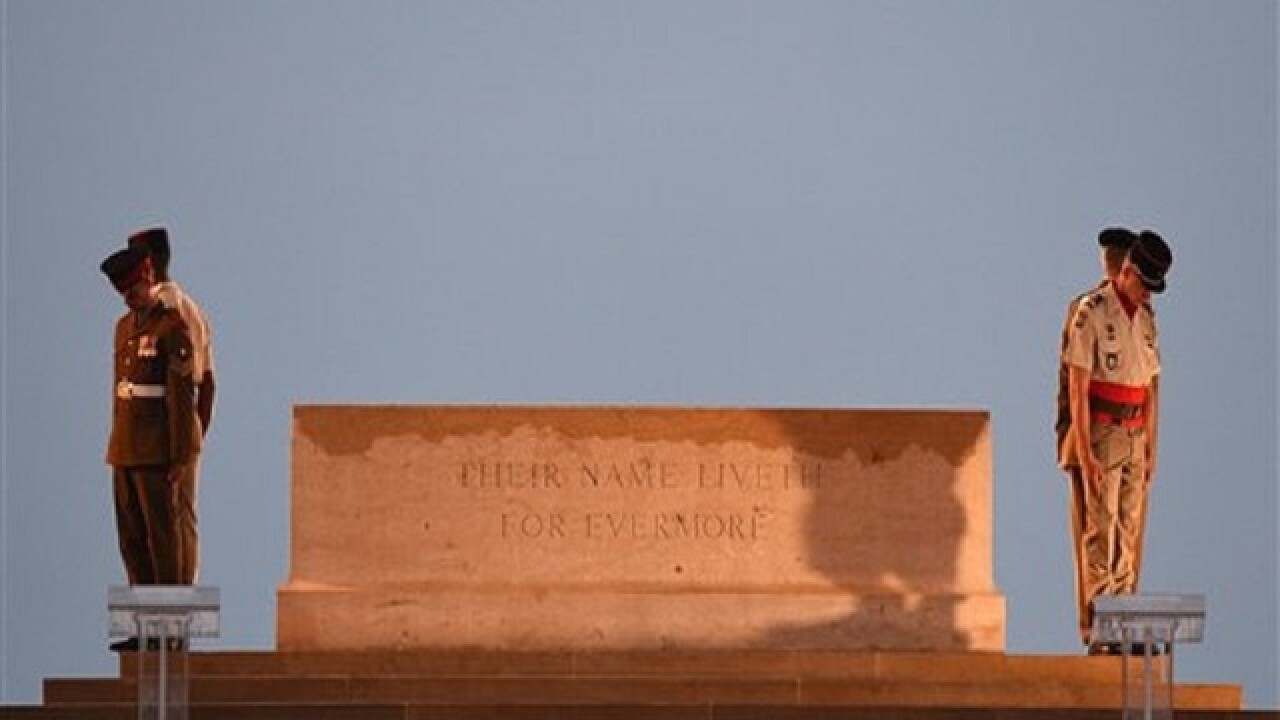 Andrew Matthews
<p>Soldiers take part in a vigil at the the Stone of Remembrance during a military-led vigil on the eve of the centenary of the Battle of the Somme at the Thiepval Memorial in France, where 70,000 British and Commonwealth soldiers are commemorated, Thursday June 30, 2016. (Andrew Matthews/Pool via AP)</p>

THIEPVAL, France (AP) — One week after Britain's vote to leave the European Union, Prime Minister David Cameron and royal family members will stand side-by-side with France's president to celebrate their historic alliance at the centenary of the deadliest battle of World War I.
More than 1 million people were killed, wounded or went missing in the Battle of the Somme in northern France, pitting British and French troops against German ones from July 1 to Nov. 18, 1916.
Britain held a moment of silence Friday morning to mark 100 years since the bloodiest day of British military history — about 20,000 British soldiers alone were killed on the first day of battle.
Despite the British vote and their opposite political views, Socialist French President Francois Hollande and conservative Cameron want to seize the occasion to stress their World War I alliance and show their attachment to the ideas underpinning European unity.
"In many ways, there is a link between the current events we're discussing and what happened 100 years ago. It's the importance of keeping peace and security and stability on our continent," Cameron told members of Parliament on Wednesday. "We're going to be standing together and remembering the sacrifices all those years ago."
Others at Friday's event include Britain's Prince Charles and his wife Camilla, his sons Prince William and Prince Harry and William's wife Kate, Irish President Michael D. Higgins and former German President Horst Koehler.
"History connects us," Hollande said Wednesday at a tense and emotional EU summit focused on how to cope with Britain's departure. "France and the United Kingdom are very close, connected by a tunnel, with a very significant presence of French people in the United Kingdom and of British people in France. ... And we have with the British a very close economic relationship."
Queen Elizabeth II attended a service at Westminster Abbey on Thursday, laying a wreath of roses on the grave of the Unknown Warrior inside the ancient abbey in London before a bugler sounded the Last Post, a tribute to the fallen. An honor guard of soldiers and civilians held an overnight vigil at the grave.
The main ceremony will start Friday at noon (1000 GMT) with the sound of cannon shots at the Memorial of Thiepval, built in 1932 by the British government and is dedicated to the 73,367 British and South African soldiers missing in the Somme area during World War I.
Three World War I aircraft — one French, one British, one German — will fly over the cemetery to close the ceremony.
Later Friday, Charles and Camilla will pay tribute to Northern Irish and Canadian soldiers in two separate events in Thiepval and in the nearby village of Beaumont-Hamel.
Last month, Hollande and German Chancellor Angela Merkel commemorated together the centenary of the Battle of Verdun, the longest of World War I. The leaders praised their countries' friendship, risen from the ashes of two world wars and strengthened through EU cooperation.
Copyright 2016 The Associated Press. All rights reserved. This material may not be published, broadcast, rewritten or redistributed.