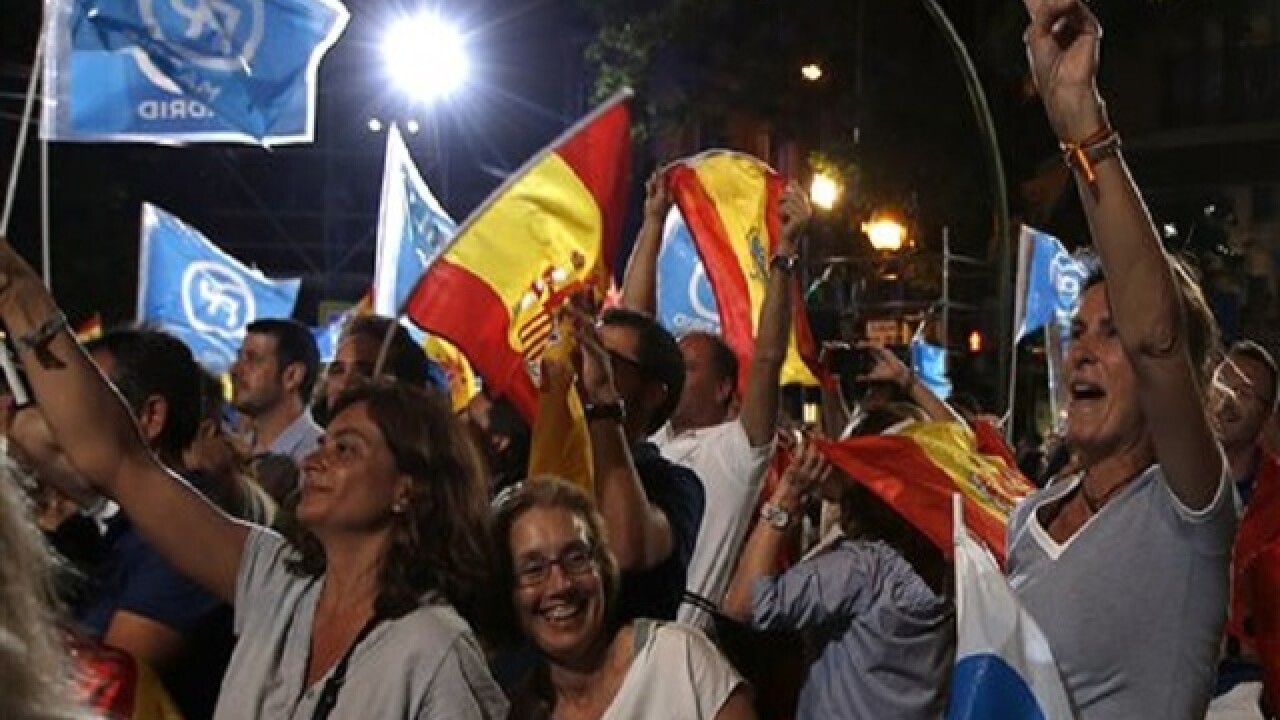 Paul White
<p>Followers of Spain's acting Primer Minister and candidate of Popular Party Mariano Rajoy, celebrate the results of their party at the national elections in Madrid, Spain, Sunday, June 26, 2016. Spain's Interior Ministry says 92 percent of the votes have been officially counted in the country's repeat election and the conservative Popular Party leads with 32 percent of the vote. (AP Photo/Paul White)</p>

MADRID (AP) — Spain's repeat election Sunday failed to clarify the political future of the European Union's fifth-largest economy, as another inconclusive ballot compelled political leaders to resume six months of negotiations on who should form a government.
The conservative Popular Party, which has ruled for the past four years, again collected the most votes in the election but still fell shy of the majority of 176 seats it needs in the 350-seat Parliament to form a government on its own.
With 99.9 percent of the votes counted late Sunday, incumbent prime minister Mariano Rajoy's party had picked up 137 seats in Parliament. That is better than the 123 it won in December but still means it will need allies if it wants to govern. Its earlier efforts to find support from rival parties after December proved fruitless.
Even so, Rajoy declared he would make a push for power, telling a victory rally in Madrid, "We won the election, we demand the right to govern."
It is unlikely to be as simple as that, however. For the past six months, the main parties have quarreled endlessly over who should assume power. In the end, King Felipe VI had to call another election. A third one, in six months' time, is still a possibility.
Antonio Barroso, a London-based analyst with the Teneo Intelligence political risk consulting group, said he expected tough negotiations between the parties in coming weeks.
"It was hoped that these elections would bring clarity and that a government would be formed quickly, but I don't think that's how it's going to be," Barroso said.
Spain has never had a coalition government.
The center-left Socialist Party placed second, collecting 85 seats, according to the count by the country's Interior Ministry. That was five fewer seats than six months ago but the Socialists kept their influence by fending off a challenge from a radical leftist alliance.
"We are the foremost political power on the left," Socialist leader Pedro Sanchez told supporters in Madrid in his own bid to ensure political influence.
Unidos Podemos (United We Can) — which brings together Podemos, a two-year-old party that grew out of a grassroots anti-austerity protest movement, and the communists and the Greens — was third with 71 seats.
The alliance, headed by pony-tailed political science professor Pablo Iglesias, had hoped to overtake the Socialists and break the country's traditional two-party system. The Popular Party and the Socialists have alternated in power for decades.
"We had expected to do better," Iglesias said.
The business-friendly Ciudadanos party came in fourth with 32 seats. Other, smaller parties won the rest of the vote by Spain's roughly 36.5 million voters.
Public anger at high unemployment, cuts in government spending on cherished services such as welfare and education and unrelenting political corruption scandals shaped the two-week election campaign.
At a Madrid polling station, many voters said they wanted Sunday's election to bring a break with the past.
"I'm voting for change, so that our politicians understand that we don't agree with what they've been doing," said Maria Jesus Genovar, a 47-year-old teacher who supported Unidos Podemos.
Unidos Podemos wants to improve job security, increase the minimum wage and strengthen the welfare state and other public services.
But Maria Jose Escos, a 59-year-old government worker, said she had no appetite for the new parties.
"I'd like everything to be like it was before," the Socialists supporter said.
Iglesias, who leads Unidos Podemos, has said he wants a pact with the Socialists in order to oust Rajoy. But a major sticking point is Iglesias's insistence on letting the powerful northeastern region of Catalonia stage an independence referendum — a possibility other main parties have rejected outright.
Ciudadanos is willing to talk to both the Popular Party and the Socialists but wants no deal with Unidos Podemos.
Besides tensions over Catalonia, Spanish politics has been dominated by a national unemployment rate of more than 20 percent and an unrelenting stream of corruption scandals, mostly involving members of the Popular Party and the Socialists.
Copyright 2016 The Associated Press. All rights reserved. This material may not be published, broadcast, rewritten or redistributed.