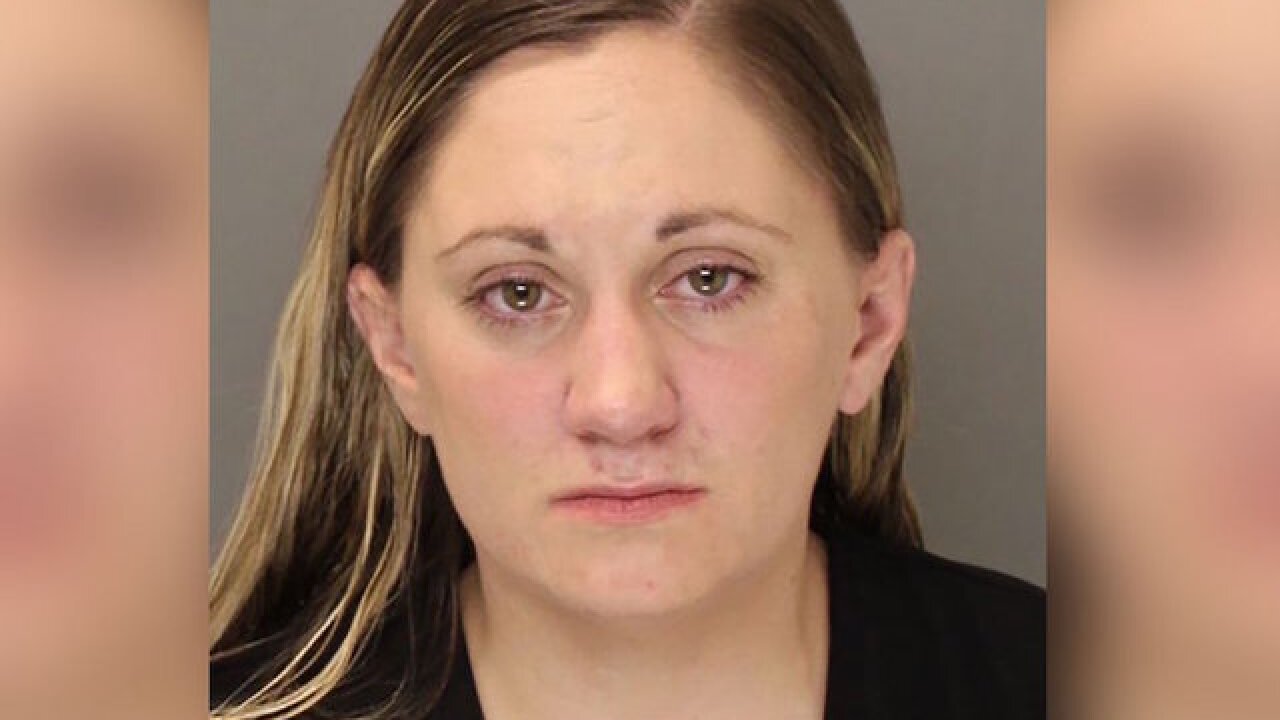 According to the criminal complaint, R.J. died from ingesting a "combination of fatal drugs through breast milk" and is being charged with criminal homicide.

According to an affidavit, Jones told investigators that about 3 a.m. April 2, she heard R.J. crying.

He had been primarily breastfed, Jones said, but she had recently started using formula because she worried that he wasn't getting enough milk and wasn't sleeping. She was too tired to make a bottle of formula, according to the affidavit, so she decided to nurse him. She then dozed on and off for a few more hours.

Before her husband, Vincent McGovern, left for the day, he made R.J. a bottle and left it with Jones. She remembers feeding R.J., putting him back in his bassinet around 6:30 a.m. and going back to sleep.

In the affidavit, Jones said she woke up about an hour later and panicked when she saw that R.J. was pale and had bloody mucus coming out of his nose. Jones and her mother, who also lived in the house, called 911 and began CPR.

R.J. was taken to a hospital by ambulance and pronounced dead by 8:30 a.m.

According to the Bucks County Coroner's Office, the autopsy revealed traces of methadone, amphetamine and methamphetamine were found in the infant's blood and contributed to his death.

The affidavit further noted that the examiner who performed the autopsy said "R.J. ingested the combination of fatal drugs through breast milk."

According to the affidavit, Jones told the investigators that she had been prescribed methadone since pregnancy to help manage her addiction to opioid painkillers, but there is no mention of other drugs.

Investigators say they tested the bottle last used to feed R.J., as well as the can of formula, and found no traces of illicit drugs.

In a news release, Bucks County Deputy District Attorney Kristin M. McElroy said it is possible that Jones could face a murder charge that carries a mandatory life sentence. The prosecutor's office did not offer any additional comment.

Since her arrest, Busico said, his client is "completely in a state of depression." He added that the charges and arrest kicked Jones when she was already down, dealing with the death of her child.

When asked about amphetamine or methamphetamine drug use by Jones, Busico would not comment.

Jones' preliminary hearing was set for Wednesday. Through her attorney, she declined to speak with CNN.

There have been just a handful of cases in which mothers have been criminally charged in cases related to drugs and breastfeeding.

In the medical literature, the cases of fatal infant poisonings by breastfeeding are also few and far between. One of the few examples was a letter in the medical journal JAMA regarding a 1994 case; it involved a 2-month-old in California who was found dead eight hours after breastfeeding. Although prosecutors were able to charge the mother with child endangerment, doctors who wrote the letter questioned the role low levels of meth concentration played in the infant's death.

Dr. Poj Lysouvakon, pediatric director of the Mother-Baby Unit at University of Chicago Medicine, said such cases are controversial.

But as a drug overdose epidemic continues to ravage America, prosecutors have become more aggressive in charging drug overdose cases as homicides.

The US Centers for Disease Control and Prevention estimates that over 72,000 people died of drug overdoses last year, many of them from opioid-related overdoses. The number of opioid overdose deaths is now more than five times high as in 1999.

The crisis extends to pregnant women, as well. The CDC's latest numbers say the rate of women delivering babies while abusing opioids has more than quadrupled between 1999 and 2014.

It's a public health problem that doctors say needs medical attention, for the benefit of both the user and the child -- and that can extend to breastfeeding.

Treatment for mother and child

When it comes to methadone treatment for opioid addiction, both the American College of Obstetricians and Gynecologists and the Academy of Breastfeeding Medicine include it in their guidelines as a safe and encouraged form of medical-assisted treatment for pregnant and nursing women.

"Babies exposed to opioids ... in utero are at risk for developing neonatal abstinence syndrome, a condition resulting from the newborn going through withdrawal once exposure to the opioids is stopped. An opioid-using mother is secreting small amount of the opioid in her breast milk, which the baby then ingests," Lysouvakon said.

The amount babies take in is usually undetectable or very small, he explained.

"All of the guidelines support breastfeeding for mothers who are in treatment programs and not taking other illicit or non-medically indicated drugs," said Dr. Walter Kraft, an expert in the treatment of neonatal abstinence syndrome at the Thomas Jefferson University Hospital. "There may be other reasons why breast feeding may not be right, such as taking other prescribed medications which are not safe for the baby.

"Some of the benefits of breastfeeding infants at risk of withdrawal from opioids is not just the methadone in the breast milk but the skin-to-skin contact between baby and mom, which comforts and soothes the baby," said Kraft.

And although recreational drug use is not encouraged during breastfeeding, Kraft said there may be situations in which a mother may breastfeed while on medically prescribed stimulants,"if there is compelling reason to do so for the health and well being of the mother," he said.

For example, amphetamines can be prescribed for narcolepsy, and methamphetamine can be used to treat ADHD and obesity.

For those mothers who do use amphetamines recreationally, there is very limited data. One study advises to wait 48 hours after using before nursing.

Experts said the details of Jones' case are key to understanding what happened: How were the toxicology tests performed? Were the results confirmed in follow-up testing? Was Jones tested for the same substances to corroborate her as a source of the drugs in R.J.'s blood? What levels of drugs were found in R.J.'s blood? Was Jones prescribed any stimulants?

Substance abuse is a clinical condition, said Dr. Amina White, a bioethicist and an obstetrician-gynecologist at the University of North Carolina, Chapel Hill.

"It requires clinical intervention. It would be highly problematic to charge someone with criminal wrongdoing who is in fact seeking or in need of or already undergoing treatment for a substance use disorder," White said. "One would hope that the response to this very unfortunate case would be: What can we do to better support someone like her?" she said.

Lynn Paltrow, an attorney and founder and executive director of National Advocates for Pregnant Women, said criminal charges like those facing Jones are part of the larger war on drugs narrative. Paltrow worries about the public health ramifications that can follow from charges like this and ultimately discourage women from breastfeeding, and hospitals from following the scientific evidence.

"They have far more to do with political expediency and popular narratives of blame than anything about science," she said.