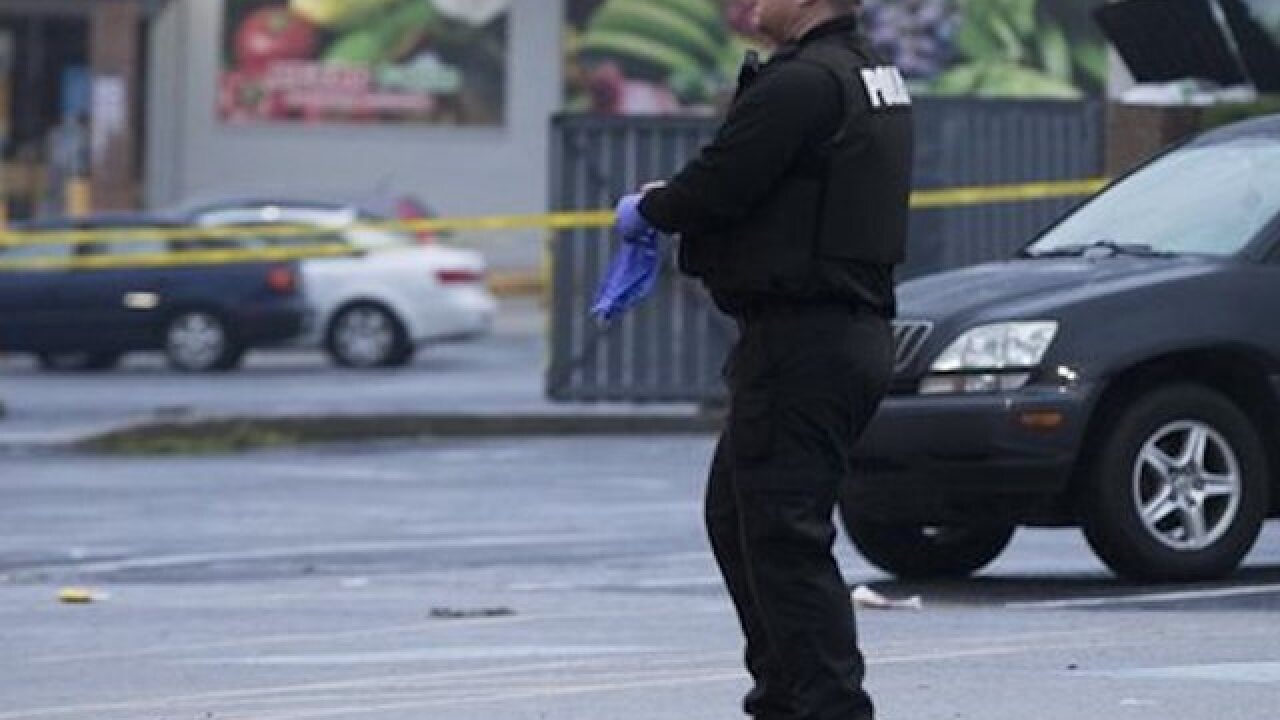 Copyright Associated Press
Evan Vucci
<p>Police stand outside a Popeyes restaurant during an investigation into the murder of Jacai Colson, a four-year veteran of the Prince George's County police force, who was shot outside the District III police station, on Sunday, March 13, 2016, in Hyattsville, Md. (AP Photo/Evan Vucci)</p>

CHEVERLY, Md. (AP) — Three brothers have been arrested in the killing of an officer outside a police station by a gunman who "intended to die during a gun battle with police," his department announced Monday.

Prince George's County police tweeted Monday that they now have a third brother in custody in the killing of Officer Jacai Colson Sunday night. One, the gunman, was wounded when other officers responded, and is expected to survive. Police have not released their identities.

The shooter opened fire on the first officer he saw outside the station around 4:30 p.m. Sunday in Landover, a suburb about 10 miles northeast of downtown Washington, D.C., the chief said.

A gun battle followed, with several officers shooting at the suspect, Stawinski said.

"Those officers did not shrink. They bravely advanced and engaged this individual," the chief said.

Stawinski said one brother was believed to have been with the gunman when he opened fire, but fled and was later arrested. No information was immediately released about the second brother. The chief had few other answers for reporters at a Sunday night news conference.

Colson, who would have turned 29 this week, was a four-year department veteran who worked as an undercover narcotics officer. His football coach at Randolph-Macon College, where Colson played for one year, said he was "a great young man who was well liked and well respected."

"He was just a great human being," coach Pedro Arruza said. "He was a very positive, positive person and an upbeat guy, a good person to be around. He had a lot of friends on campus, everybody liked him. He was just a really high-character guy."

Colson's fellow officers were going about their business on the quiet, rainy Sunday afternoon when the gunman shot him. He was pronounced dead at a hospital.

Prince George's County State's Attorney Angela Alsobrooks called it "cowardice" and a "horrific act of evil," promising an aggressive investigation and prosecution. The FBI and the Bureau of Alcohol, Tobacco, Firearms and Explosives also are aiding police, spokesmen for the two federal agencies said.

The Washington Post reported that an eyewitness said she looked through her window and saw a man dressed in black firing a handgun.

"He fired one shot, and then he started pacing back and forth, then fired another shot," said Lascelles Grant, a nurse. Police then poured out of the station, she said. "Just looking outside, I'm like, 'Oh my God, look at all these police officers running out, putting their lives really in danger.'"

The woman couldn't immediately be reached by The Associated Press.

Police advised residents near the police station to stay inside during the "active shooter" situation, then lifted the "shelter in place" warning.

"The officers are devastated," Stawinksi said after he was pronounced dead.