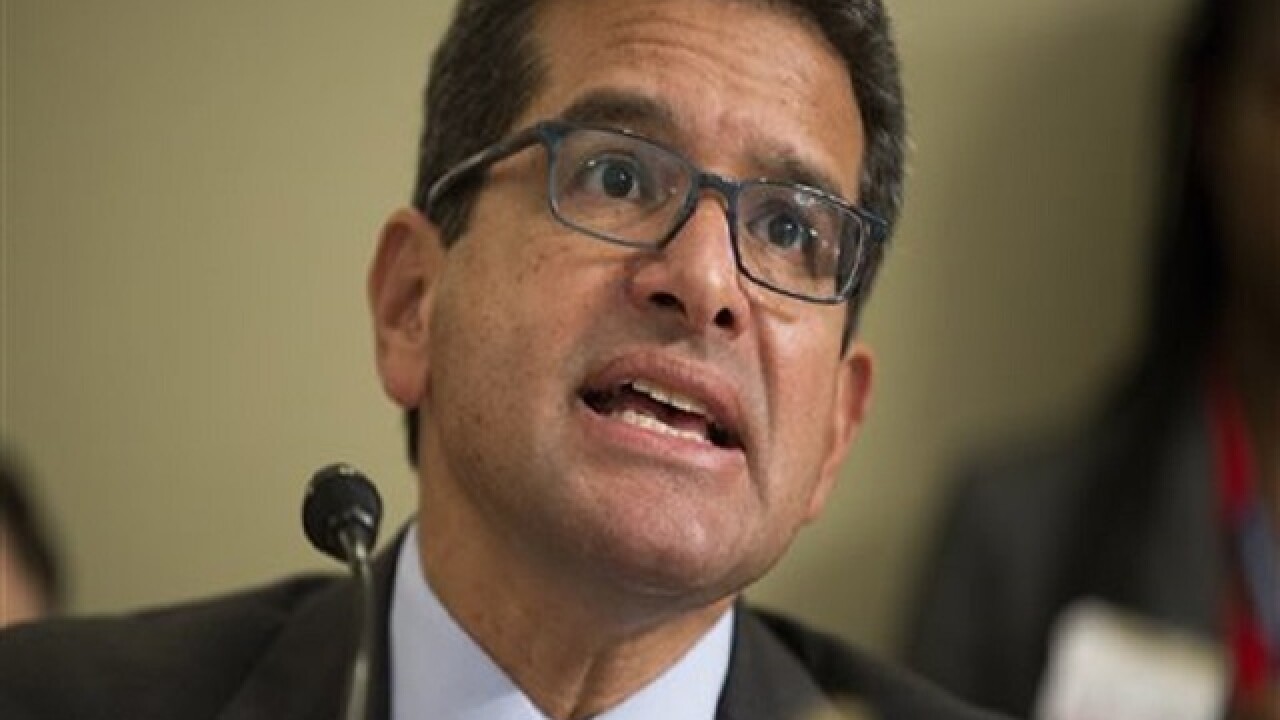 WASHINGTON (AP) — Senate Republican and Democratic leaders on Tuesday promised to complete a rescue package for debt-stricken Puerto Rico before a $2 billion debt payment comes due on Friday.
"Failure is really not an option," Majority Leader Mitch McConnell, R-Ky., told reporters after meeting with his GOP caucus. Separately, Treasury Secretary Jacob Lew lobbied Democrats to back the package in a last-minute bid to secure the votes and help the U.S. territory with its crippling $70 billion debt.
The package, backed by the White House, Democrats and Republicans, would create a control board that could oversee restructuring of some of the island's debt. A vote on the measure is scheduled on Wednesday.
Lew met with reluctant Democrats and urged them to vote for it, even though he said it isn't perfect.
"The fact that this works and it gives Puerto Rico the ability to move forward is just an overwhelming reason to pass this in a timeframe that prevents the descent into chaos," Lew said.
Senate Minority Leader Harry Reid, D-Nev., said he would vote for the legislation, though he opposes some parts of it, including a provision that would allow the island's government to lower the minimum wage for some younger workers.
Other Democrats said they would also back the bill.
"I'm not going to let the adequate be the enemy of the barely sufficient," said Oregon Sen. Ron Wyden, the top Democrat on the Senate Finance Committee.
But others remained staunchly opposed. Democratic Sen. Bob Menendez of New Jersey monopolized the Senate floor for more than four hours Tuesday evening to protest the legislation that he warned adopts a colonial approach to the territory.
Menendez said ordinary Puerto Ricans get little say and the package favors hedge-fund creditors over island pensioners.
"I think the 3.5 million United States citizens who call Puerto Rico home deserve more than being jammed in a legislative process where their lives and their futures are going to be dictated by some time by a control board," Menendez said at the opening of his speech.
Sen. Bernie Sanders, I-Vt., also spoke out against the legislation, calling it "disastrous" and arguing that it turns the United States into a colonial power.
The House is out of session until July 5, so the Senate will have to pass the House bill unchanged for it to head to the president's desk for his signature before the Friday deadline.
Some Republicans said they planned to vote against it as well.
"I'm just not sure we have enough in this bill to ensure they will make the difficult decisions they need to," North Carolina Sen. Thom Tillis said of the Puerto Rican government.
And a bipartisan group of lawmakers from Ohio and West Virginia threatened to vote against proceeding to the bill in an effort to force action on unrelated legislation that would help coal miners' pensions.
"If we're going to help Puerto Rico escape bankruptcy, we should also be helping the 90,000 coal miners in Ohio, West Virginia and elsewhere who are also suffering the effects of the coal bankruptcies," Sen. Rob Portman, R-Ohio, said.
As several senators remained uncommitted, some bondholder groups worked to turn lawmakers against the bill, arguing that the measure doesn't protect bondholders and is tantamount to a bailout for the territory. Several labor unions also lobbied against the measure, arguing in a letter sent to senators that the minimum wage provision could take money out of the Puerto Rican economy.
Like Lew, Puerto Rican Gov. Alejandro Garcia Padilla made a last-minute visit to Capitol Hill to lobby for votes.
"It's not perfect, but we need it," Padilla said between visits with senators.
Copyright 2016 The Associated Press. All rights reserved. This material may not be published, broadcast, rewritten or redistributed.