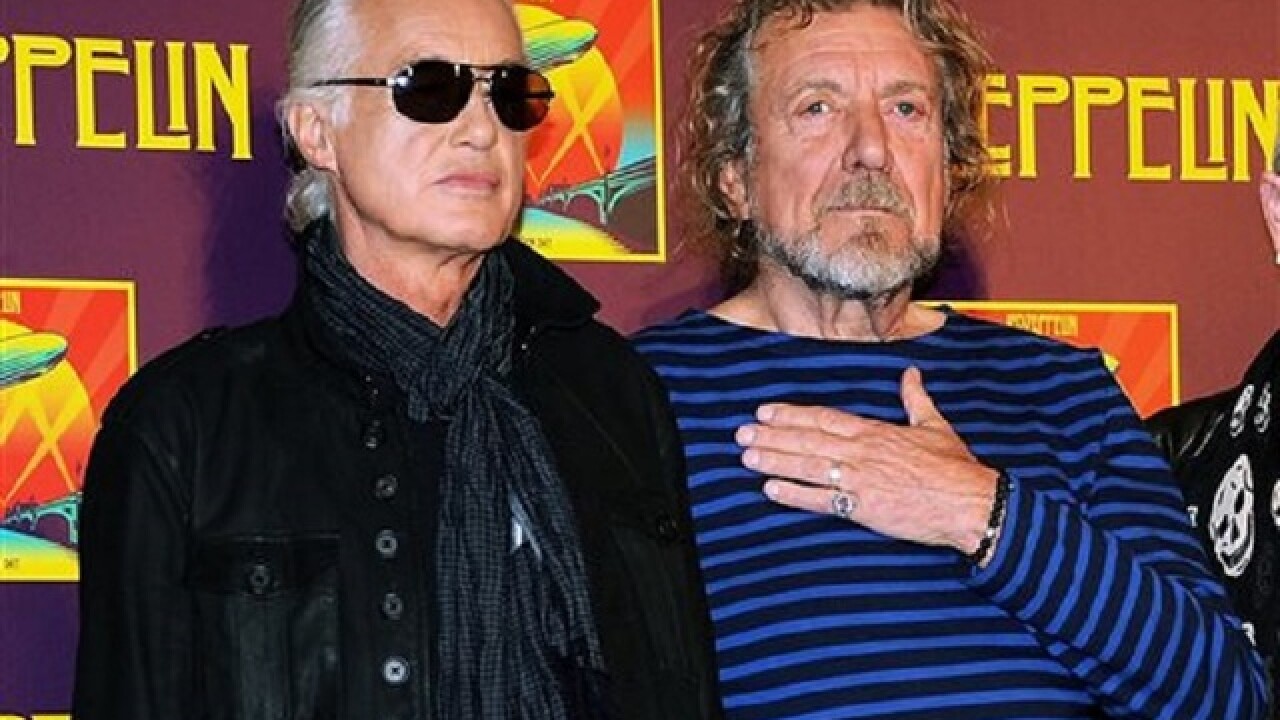 Evan Agostini
<p>FILE - In this Oct. 9, 2012 file photo, Led Zeppelin guitarist Jimmy Page, left, and singer Robert Plant appear at a press conference ahead of the worldwide theatrical release of "Celebration Day," a concert film of their 2007 London O2 arena reunion show, in New York. Led Zeppelin's lawyers asked a judge Monday, June 20, 2016, to throw out a case accusing the band's songwriters of ripping off a riff for "Stairway to Heaven." (Photo by Evan Agostini/Invision/AP, File)</p>

LOS ANGELES (AP) — A key chapter of rock 'n' roll history could be rewritten by a jury that began deliberating Wednesday over whether Led Zeppelin ripped off a riff for its epic "Stairway to Heaven."
A lawyer representing the trust of a deceased songwriter criticized members of Led Zeppelin for "selective" memories and "convenient" truths in testifying about the origin of Jimmy Page's acoustic guitar opening of the 1971 rock anthem.
"He didn't tell you where he got the idea for the introduction," attorney Francis Malofiy said in his closing argument in federal court in Los Angeles. "It was a piece of music lifted from 'Taurus' by Randy California."
Jurors deliberated for several hours Wednesday but did not reach a verdict. They're scheduled to resume Thursday.
The trust for Randy Wolfe, who adopted the surname California, is seeking millions of dollars and a third of the songwriting credit for "Stairway," which it claims the band took from "Taurus," released by Wolfe's band Spirit in 1968.
Led Zeppelin's lawyer, however, said the trust didn't own the copyright and the passage in question was a common descending chord sequence in the public domain.
Attorney Peter Anderson also said the plaintiff failed to prove a case that should have been brought more than 40 years ago when Wolfe was alive and Page and singer Robert Plant would have had better memories.
"How can you wait a half century and criticize people ... 45 years later for the delay you caused?" Anderson said. "They should have sued in 1972."
Page and Plant vividly recalled creating "Stairway" at a country house south of London, though their testimony was at odds with previous accounts given in interviews by band members over the years. Their recollections of Spirit, a band they opened for at their first U.S. show in 1968, were less clear.
The plaintiff needs to show that Page and Plant would have had some familiarity with the work. The record that included "Taurus" was found in Page's massive collection of records and CDs, but he claimed never to have heard it.
Spirit's former bassist recalled playing "Taurus" at the Denver show where Led Zeppelin opened, but there was no other evidence to support that. Page said he didn't stick around to see Spirit play that night and he denied ever seeing them in concert, despite articles in which he said he liked seeing them and they struck him on "an emotional level."
"Spirit and Led Zeppelin were never on stage together, they never toured together," Anderson said. "There was not a single person that said anyone from Led Zeppelin was present when 'Taurus' was performed."
Malofiy said he didn't need camera footage of Page and Plant transcribing "Taurus" to show they stole the work.
The trust must also show the works are substantially similar. That is a tricky task because the copyright is based on the sheet music filed with the Library of Congress.
Jurors were not played the "Taurus" recording, which contains a section that sounds very similar to the instantly recognizable start of "Stairway." Instead, they were played guitar and piano renditions by musicians on both sides of the case. Not surprisingly, the plaintiff's version on guitar sounded more like "Stairway" than the defense version on piano.
Defense experts said the songs shared little in common other than chord sequence that dates back 300 years. Experts for the trust said there were significant other likenesses including the use of arpeggios, similar note combinations, pitch and note durations, which Malofiy said was "more than coincidence."
The defense said jurors probably won't need to decide damages, but reminded them of the $868,000 in net profits that a record executive attributed to the song during the past five years. Anderson also mentioned that only a fraction of the 8-minute song is in question, which could further trim any award. That would be a fraction of the millions Malofiy mentioned, though he didn't specify a figure that the jury should award.
The case is not the first time Led Zeppelin has been accused of swiping another artist's work. The lawsuit lists at least six other songs in which the band has reached settlements over songwriting credits for works including "Whole Lotta Love," ''The Lemon Song," and "Dazed and Confused."
Copyright 2016 The Associated Press. All rights reserved. This material may not be published, broadcast, rewritten or redistributed.