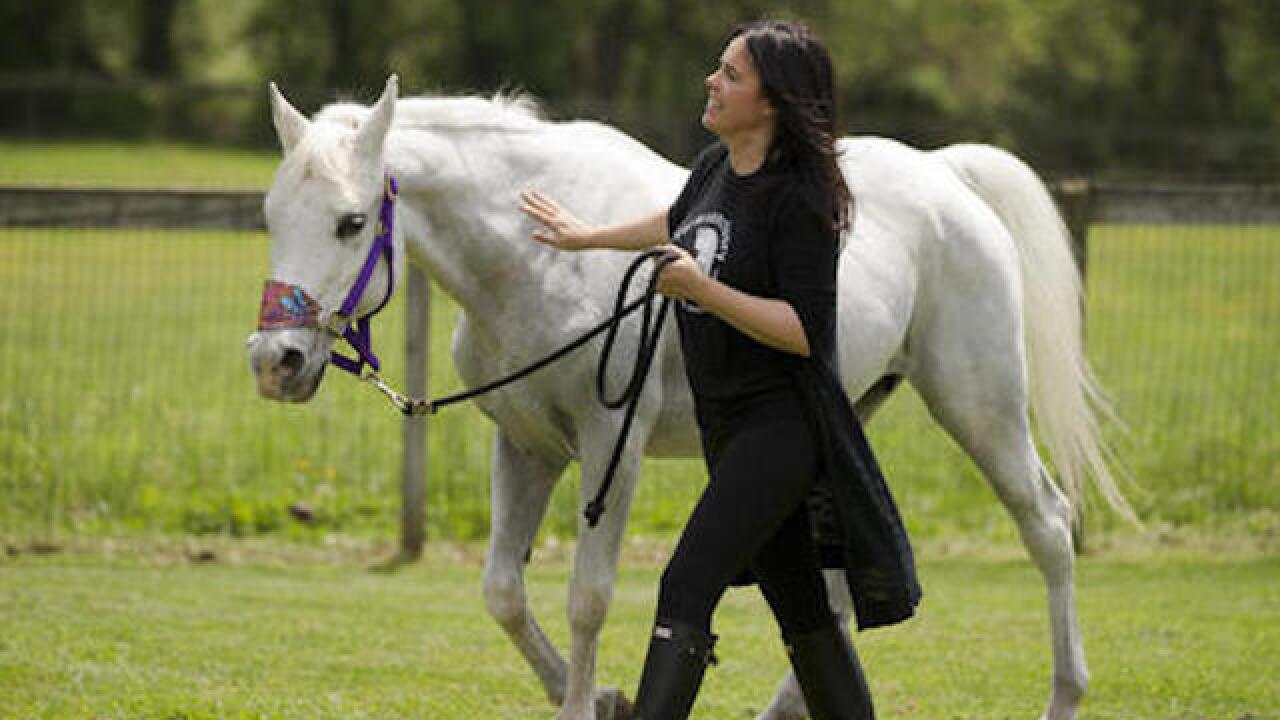 Matt Rourke
<p>Tracey Stewart, leads Lily the horse she adopted away at the end of a news conference Wednesday, May 25, 2016, in Kennett Square, Pa. Doreen Weston, the former owner of the horse adopted by Jon Stewart and his wife Tracey that was portrayed as having been shot by paintballs over 100 times, said Wednesday the animal was used at children's finger-painting parties and was never injured by a paintball gun. Lily was found seemingly abandoned at an auction stable in New Holland, Pa., in March. Police say she was covered in paint and extremely sore to the touch. (AP Photo/Matt Rourke)</p>

MIDDLETOWN, N.J. (AP) — A horse adopted by Jon Stewart and his wife after it was found seemingly abandoned at an auction stable in Pennsylvania died at their New Jersey farm on Sunday.

The white mare named Lily was euthanized after falling and breaking a bone in its neck at their Middletown farm, Tracey Stewart said.

"When we knew there was nothing more we could do for her we covered her in kisses and kind words and said our goodbyes," Stewart said in a statement. "Our hearts are aching we had so many more fun plans for her. She was beyond special and beyond loved."

The Stewarts adopted the horse last month after it was found in March at an auction stable in New Holland, Pennsylvania. Police said she was covered in paint and was extremely sore to the touch. The abused-horse tale soon became a cause celebre, but the animal's previous owner said the story relayed by the Lancaster County Society for the Prevention of Cruelty to Animals that it was shot by paintballs was wrong.

Weston, who owns Smoke Hollow Farm in Pittstown, New Jersey, said the horse was about 35 years old and was acquired in the late 1990s. She said the animal was actually used as a canvas at children's finger-painting parties.

Weston said she wanted the horse euthanized because its quality of life was so poor. She said she contacted a horse dealer to take it in February and assumed the dealer would euthanize the horse but didn't tell him to.

The dealer, Phillip Price, of East Providence, Rhode Island, was convicted last month in New Holland of animal cruelty and other charges related to transporting a horse in poor condition. Price is on probation in Rhode Island after pleading no contest to animal cruelty in July, court records show.

Weston said that she was sad to hear that the horse died and thanked the Stewarts for trying to help her.

"She had a lot of issues. Her physical condition was deteriorating rapidly. I did everything I could to try to get her better," Weston said. "She wasn't well, she hadn't been well for a while. ... They tried to make her have more quality of life and I'm sure she did, for a month or so."

Tracey Stewart said that Lily enjoyed her time at the farm munching on grass and got "massages, baths and lots and lots of hugs."

Stewart said the animal slept in her barn listening to soft music and that the horse's favorite Pandora channel was Ray Lamontagne.