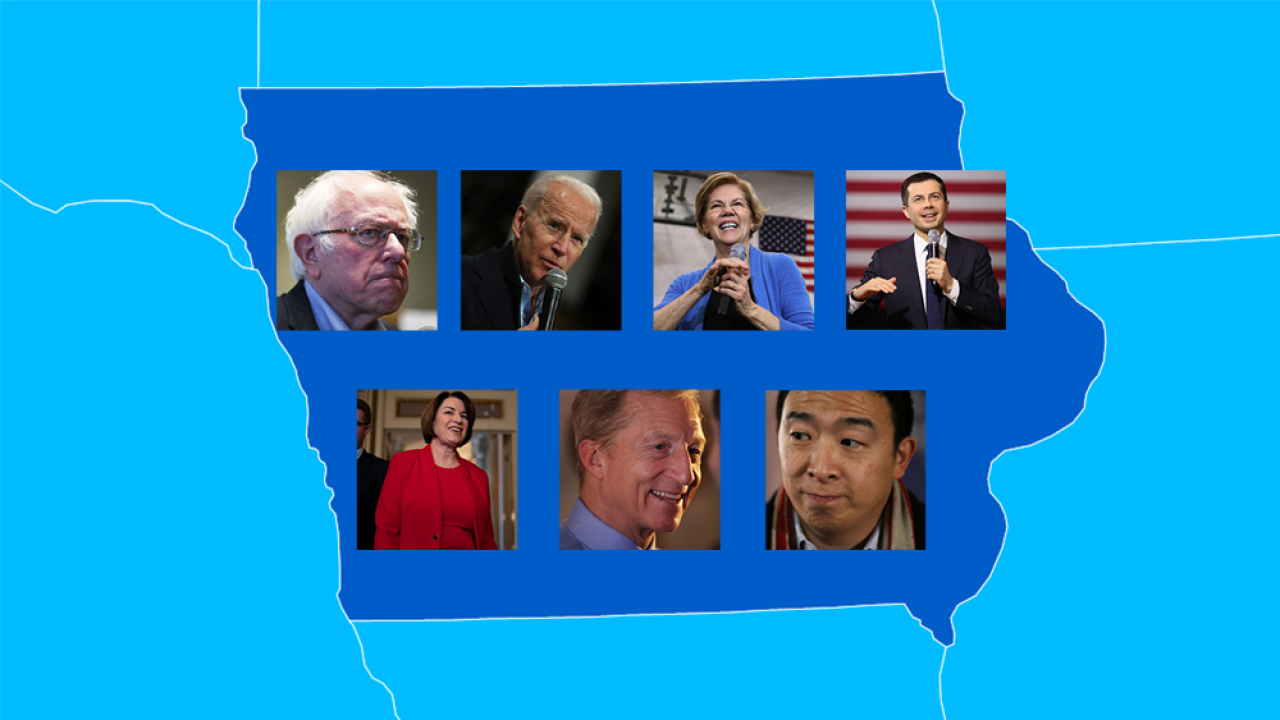 The first delegates in the 2020 presidential race will be awarded on Monday when Iowans caucus for their preferred Democratic candidates.

Forty-one delegates will be up for grabs — as well as key early momentum in a hotly-contested primary race.

Unlike most state primaries, where voters cast their choice for the Democratic nominee in a traditional secret ballot, the Iowa caucus feels closer to a community event.

When Iowans first arrive at their polling stations, they'll first hear pitches from supporters of all the candidates on the ballot. Those supporters will then move to different sides of the room, and caucus-goers will literally take sides and join up in groups with their preferred candidates.

At that point, the precinct will determine which candidates are viable and which ones are not. Then, anyone caucusing for a non-viable candidate has 15 minutes to join up with the group of any candidate still in the running, or abstain.

Typically, a candidate needs the support of 15 percent of people in the room to be considered viable.

At the end of the night, the party leaders at each precinct determine the number of delegates to send to the state party using a mathematical formula. Based on that information from the precinct, the state party then determines how many delegates each candidate earns.

According to an analysis of polls by Real Clear Politics, Sen. Bernie Sanders is currently leading in the polls at 24 percent, followed closely by former Vice President Joe Biden at 20 percent. South Bend Mayor Pete Buttigieg and Sen. Elizabeth Warren are nearly tied in third place at about 16 percent, while Sen. Amy Klobuchar trails behind in fifth at 8 percent.

According to The New York Times, Andrew Yang and Tom Steyer are also both running "competitive campaigns" in Iowa.

The polling does not include information from a Des Moines Register poll that was scheduled to be released Saturday night, which was scrapped at the last minute after Buttigieg's campaign lobbied complaints about the way in which it was conducted.

Among those not campaigning in Iowa is former New York Mayor Michael Bloomberg, who entered the race for the Democratic nominee this winter and chose to instead prioritize on campaigning in other states.

The 2016 Iowa Democratic caucuses proved to be a preview of what was to come in the general election. Former Secretary of State Hillary Clinton edged out Sanders, earning 23 delegates to Sanders' 21. In the Republican caucuses that year, Sen. Ted Cruz edged out then-candidate Donald Trump, eight delegates to seven delegates.