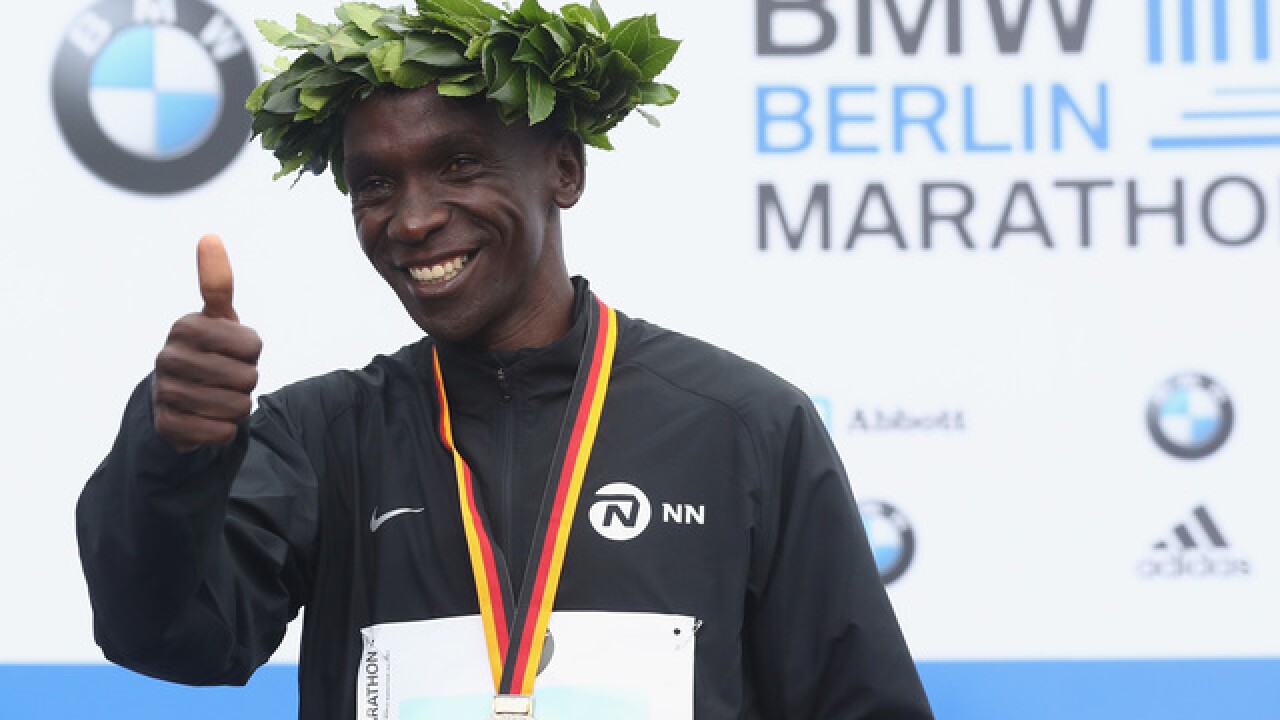 Image copyright 2018 Getty Images. All rights reserved. This material may not be published, broadcast, rewritten, or redistributed.
Alexander Hassenstein
<p>Eliud Kipchoge of Kenya celebrates at the victory ceremony winning the BMW Berlin Marathon 2017 on Sept. 24, 2017 in Berlin, Germany. (Photo by Alexander Hassenstein/Getty Images For BMW)</p>

In doing so the 33-year-old obliterated the previous record, set 14 years ago by fellow countryman Dennis Kimetto, by 78 seconds.

It's the latest achievement for perhaps the greatest marathon runner in history, who has won 10 of the 11 marathons in his career.

But take a closer look into how Kipchoge shaved more than a minute off the previous world best and his time is even more astonishing.

Kipchoge's split times left many viewers scratching their heads as they tried to work out just how fast the race was won.

The Kenyan was led out from the start by three pacemakers and he clocked the first 10 kilometers in world record pace.

Shortly after the halfway mark, all three pacemakers dropped out, leaving Kipchoge to run the final 10 miles alone. But where most athletes would struggle, Kipchoge continued to defy the odds and instead of falling off the pace, he actually sped up.

He ran the first half of the race in one hour, one minute and six seconds but went 30 seconds quicker in the second half. Embodying the loneliness of a long-distance runner, Kipchoge ran at an eye-watering pace of four minutes and 37 seconds per mile.

READ: The race for a sub-two-hour marathon

"It was really hard. I was truly prepared to run my own race. I had to focus on the work I had put in in Kenya and that is what helped push me," Kipchoge said after he had leaped into his coach Patrick Sang's arms at the finishing line.

It was the biggest improvement on the marathon record since Derek Clayton knocked two minutes, 23 seconds off the mark in 1967.

"Congratulations @EliudKipchoge with the new WR! Fantastic run, you're an example for each and every runner on this world," he wrote.

In 2017, Kipchoge made history in an unofficial race organised by Nike, as part of their Breaking2 project.

He ran the distance in a world-record time of two hours and 25 seconds, on a favorable track in Monza and guided by a team of pacemakers.

Despite the race not qualifying as an official time, it showed his frightening potential which manifested itself on the streets of Berlin on Sunday.

"After Monza last year, I believed ⁦[he] was capable of smashing the WR. Today he delivered in outstanding fashion and rewrote history, unbelievably strong and focused throughout and owned the Berlin Streets", wrote Paula Radcliffe, the previous world record holder of the women's marathon.

The best in the world

The Berlin Marathon tweeted that the race would "be remembered for decades" and their is no obvious candidate on the circuit who looks close to challenging the time set by Kipchoge on Sunday.

Perhaps the only threat to the new record is from Kipchoge himself, as he continues his bid to break the two-hour barrier.

But, after the finishing in Berlin, the Kenyan joked that he was looking to go slower next time out.