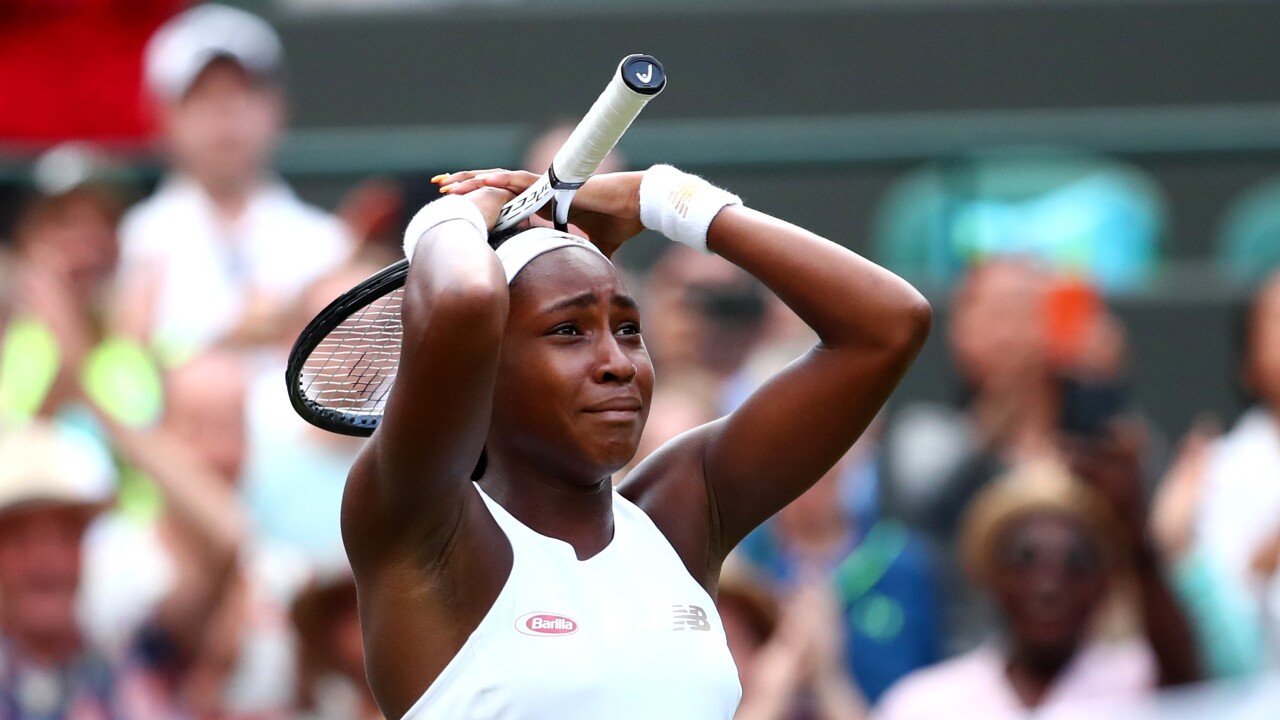 WIMBLEDON, England (AP) — Coco Gauff grew up admiring the Williams sisters. Picked up a tennis racket as a little girl because of them. And on Monday at Wimbledon, still just 15, Gauff beat one of them.

Gauff, the youngest competitor to qualify at the All England Club in the professional era, showed the poise and power of a much older, much more experienced player, pulling off a 6-4, 6-4 victory in the first round over Venus Williams, who at 39 was the oldest woman in the field.

When it ended, Gauff dropped her racket and put her hands on her head. After a handshake and exchange of words at the net with Williams, Gauff knelt by her sideline chair and tears welled in her eyes. Up in the stands, her father leaped out of his seat.

"Honestly, I don't really know how to feel. This is the first time I ever cried after a match. Or winning, obviously; I've cried after a loss before," said Gauff, who is based in Florida. "I don't even know how to explain how I feel."

"It didn't really seem real, for a moment," said Gauff's father, Corey, between handshakes and slaps on the back and requests for selfies from spectators leaving No. 1 Court. "On the walk to the court, I was walking behind her. She was excited. I was excited. She seemed confident, but I wasn't sure if it was false confidence or she really was. I just said to her: This match is really magical. Just enjoy it. Your first Wimbledon main draw and you're on a main court against somebody you looked up to from the beginning."

It was by far the most anticipated match of Day 1 at the grass-court tournament, but hardly the only upset. Two-time major champion Naomi Osaka, who was No. 1 until a week ago, lost 7-6 (4), 6-2 to Yulia Putinseva, joining two young members of the men's top-10, No. 6 seed Alexander Zverev and No. 7 seed Stefanos Tsitsipas, on the way out.

This one, though, was special, potentially the sort of changing-of-the-guard moment that people could remember for years.

Gauff certainly has the mindset of someone who intends to go far.

"I've said this before: I want to be the greatest. My dad told me that I could do this when I was 8. Obviously you never believe it. I'm still, like, not 100 percent confident. But, like, you have to just say things. You never know what happens," she said. "If I went into this match saying, 'Let's see how many games I can get against her,' then I most definitely would not have won. My goal was to play my best. My dream was to win. That's what happened."

How far does she think she can fare this fortnight?

"My goal," she said, her face expressionless, "is to win it."

Gauff came into the week outside the top 300 but was granted a wild card by the All England Club to enter qualifying. She rolled through those rounds at a nearby site, knocking off the event's top seed.

But this was a whole other task.

Gauff was sensational and showed zero signs that the moment or the matchup was too daunting for her. It's the sort of unusual calm and steady way she has progressed through the various levels of youth tennis, including reaching the U.S. Open junior final at 13 and winning the French Open junior title at 14.

The first set was remarkable: Gauff had 10 winners to only two unforced errors, all the while trading powerful groundstrokes at the baseline with Williams, and never facing a break point.

Gauff, who is black, idolized Williams and her younger sister, Serena, the first African American women since Althea Gibson in the 1950s to win a Grand Slam singles championship.

Serena has said Gauff reminds her of Venus.

After Monday's match, Gauff said she thanked Venus "for everything she did."

"I wouldn't be here if it wasn't for her," said Gauff, who joined the crowd in applauding for Venus as she walked off the court. "And I was just telling her that she's so inspiring. Like, I always wanted to tell her that. And even though I met her before, I guess now I have the guts to."

She showed plenty of grit in this match, particularly after getting broken to make it 4-all in the second set. Gauff steadied herself right there, though, breaking right back with a pair of forehand passing shots that drew errant volleys.

And then in the final game, Gauff needed to erase the disappointment of wasting her initial three match points. She did just that, converting her fourth when Venus put a forehand into the net.

Many 15-year-olds might spend an early summer day at the beach or at a mall. This one played a tennis match at Wimbledon against Venus Williams — and won.

"People just kind of limit themselves too much. Once you actually get your goal, then it's like: What do you do now?" Gauff said. "I like to shoot really high."