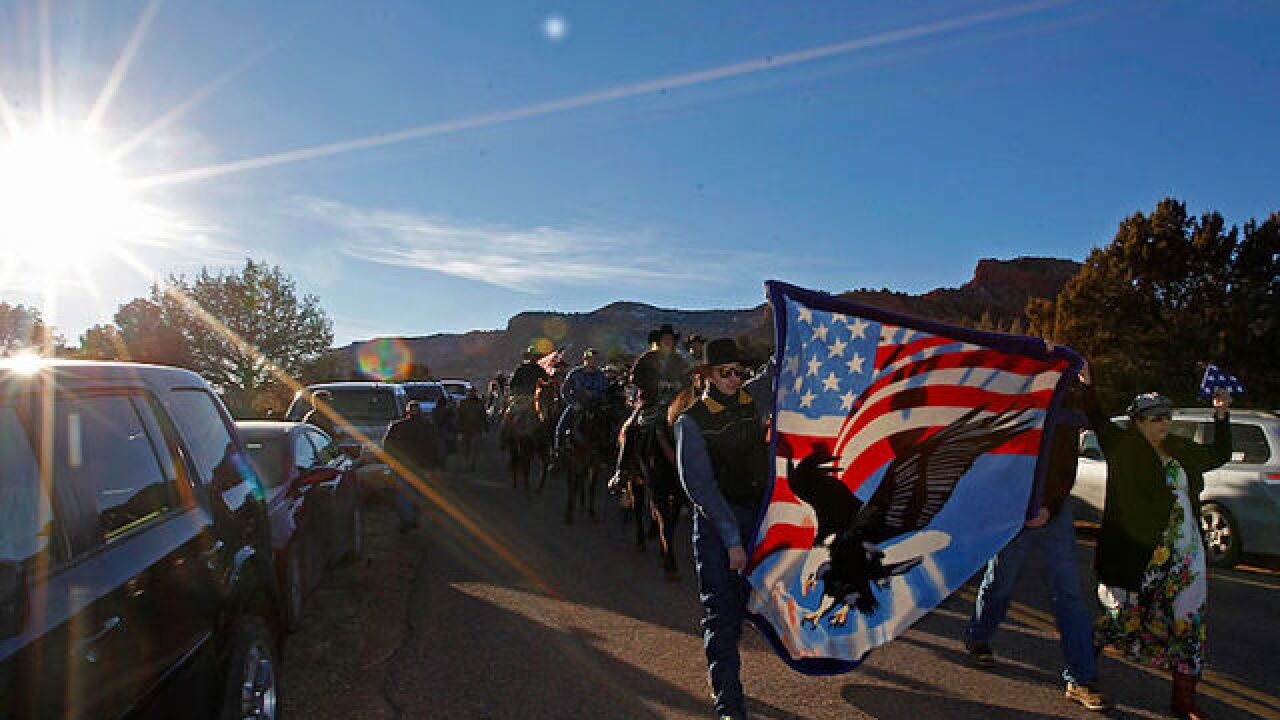 Copyright Getty Images
George Frey
<p>People join a horse honor guard as they escorts the hurst after the funeral of rancher Robert "LaVoy" Finicum on February 5, 2016 in Kanab, Utah. Finicum who was part of the Burns, Oregon standoff with federal officials was shot and killed by FBI agents when they tried to detain him at a traffic stop on February 27, 2016. </p>

A federal jury in Oregon on Friday acquitted an FBI agent accused of lying to authorities about whether he opened fire during the fatal shooting of LaVoy Finicum, one of the leaders of the occupation of federal property in 2016.

Agent W. Joseph Astarita was acquitted of making false statements and obstruction of justice, according to a statement from the US Attorney's Office in Portland.

An attorney for Astarita, David Angeli, told CNN on Friday night that the defense emphasized during the trial there were no eyewitnesses who saw Astarita fire his weapon, and there was no ballistic evidence linking shots to his weapon.

"We are grateful to the men and women of the jury who saw through a case that never should have been brought," a statement from Angeli and fellow defense attorney Rob Cary said.

The US Attorney's Office thanked the jury for its service. "Our system of justice relies on the absolute integrity of law enforcement officials at all levels of government," US Attorney Billy J. Williams said in a statement. Williams said the three-week trial included testimony from FBI agents, state and local law enforcement officers, forensic scientists and ballistics experts.

The case goes back to January 2016, when Astarita was assigned to the armed occupation of Malheur National Wildlife Refuge headquarters. Led by Ammon Bundy, a group of protesters took over the refuge to protest what they said was government overreach on federal lands.

About a month into the standoff, the FBI and Oregon State Police moved to arrest some of the occupiers as they traveled to a nearby town. After a police chase, state police shot and killed Finicum as he reached for a gun in his pocket, authorities said.

An investigation into the shooting found the fatal shots fired by Oregon State Police troopers were justified.

However, officials said they were investigating the fact that FBI agents had fired two shots before Finicum left his vehicle. One shot missed the truck, and the other hit the truck's roof, according to Deschutes County Sheriff L. Shane Nelson.

"The question of who fired these shots has not been resolved," Greg Bretzing, the FBI's special agent in charge in Oregon, said at the time.

Finicum was an outspoken protester and a father of 11.

At the time of the shooting, protesters were driving in two SUVs, according to video of the incident released by the FBI. One vehicle, carrying Ammon Bundy, pulled over peacefully, and he was arrested.

A white vehicle driven by Finicum stopped then drove away from police. The truck later crashed into a snowbank and nearly hit an FBI agent in an attempt to evade a police roadblock, video shows.

Finicum exited the vehicle with his hands up, and officers approached him with their guns drawn, the video shows. As Finicum appears to reach down to his waist, he is shot and falls to the ground.

In separate video released by police, Finicum gets out of the car and ignores orders to get on the ground, telling officers to "go ahead and shoot me." Finicum reached for his pocket containing a gun several times, leading two troopers to open fire.

Before the shooting, Finicum told CNN during the occupation that he refused to go to prison.