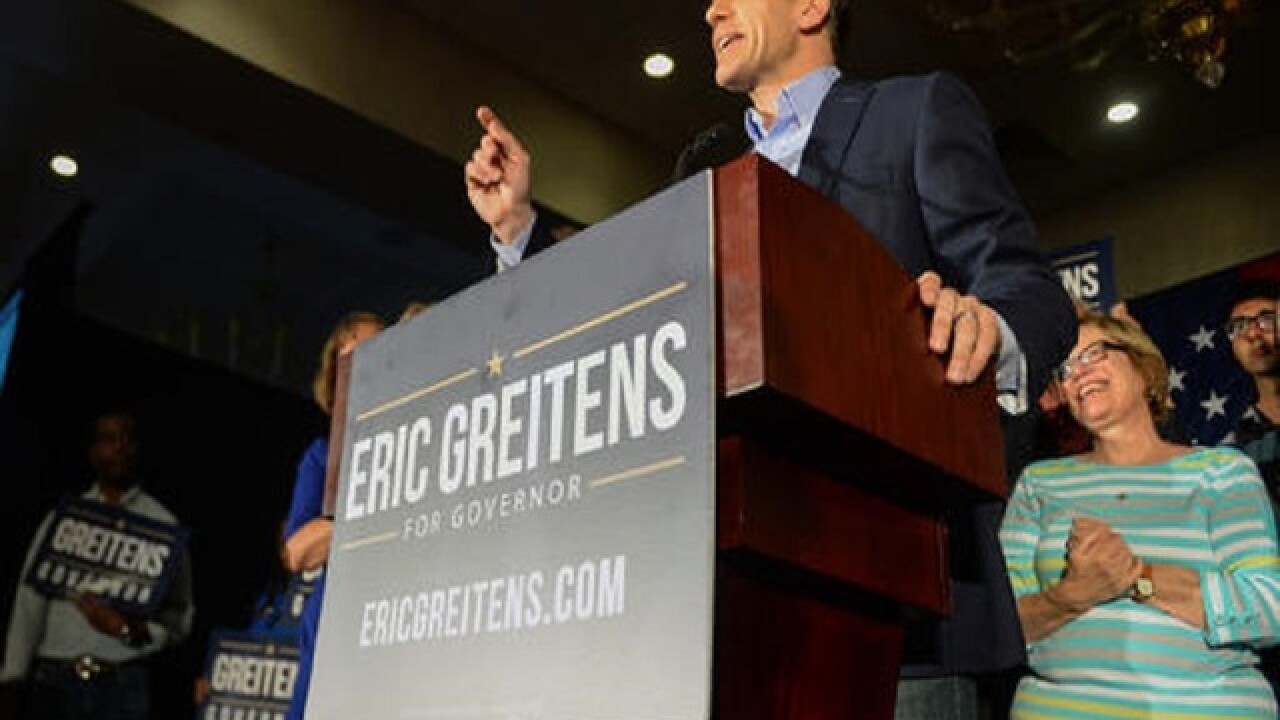 Michael Thomas
<p>Missouri Republican gubernatorial candidate Eric Greitens speaks to a crowd of supporters at the DoubleTree Hotel Chesterfield, Tuesday, Aug. 2, 2016, in Chesterfield, Mo. Former Navy SEAL officer Greitens won the Republican primary for Missouri governor Tuesday after a hard-fought race in which he cast himself as a conservative outsider willing to use his military bravado to blow up perceived corruption in government. (AP Photo/Michael Thomas)</p>

JEFFERSON CITY, Mo. (AP) — Former Navy SEAL officer Eric Greitens won the Republican primary for Missouri governor Tuesday after a hard-fought race in which he cast himself as a conservative outsider willing to use his military bravado to blow up perceived corruption in government.
Greitens prevailed over another self-described outsider, businessman John Brunner, and a pair of more experienced Republican leaders — longtime Lt. Gov. Peter Kinder and former Missouri House Speaker and U.S. Attorney Catherine Hanaway.
He declared to cheering supporters at his victory party: "Together, we are leading a conservative revolution to take our state back."
Greitens will face Attorney General Chris Koster, who easily won the Democratic gubernatorial primary, in the Nov. 8 general election. Koster, a former Republican state senator and prosecuting attorney, touted himself as a "conservative Democrat" in his victory speech and pledged a campaign showing that "fiscal conservativism and social tolerance can live together in our state."
The Missouri governor's office will be open because two-term incumbent Jay Nixon, a Democrat, has served the maximum amount allowed under state law and cannot seek re-election.
Greitens, 42, of St. Louis, already has a resume that few could match. He's been a Rhodes scholar, a boxer and black belt in taekwondo, and traveled on humanitarian missions around the world — documenting the lives of street children in Bolivia and refugees from genocidal wars in Bosnia, Rwanda and Zaire.
He joined the Navy in 2001, just months before the Sept. 11 attacks, and trained to be a SEAL officer. While deployed in Iraq, he was chlorine-gassed in a suicide bomb attack but returned to duty within days. He later served as a White House fellow under President George W. Bush in the Department of Housing and Urban Development. And Greitens founded the nonprofit group The Mission Continues, which connects veterans with volunteer work to ease the post-military transition.
He's also written three books, including the bestselling memoir "The Heart and the Fist," and published a collection of documentary photography.
He introduced himself to Missouri voters with an attention-grabbing TV ad in which he fires a military-style assault rifle into a seemingly empty field, causing a fiery explosion of a gasoline bomb. He pledged to "take aim at politics as usual" and clean up a state Capitol he claimed is run by "career politicians owned by corrupt consultants, high-paid lobbyists and special interests."
The message appeared to resonate with many voters in a year that also saw the rise of outsider presidential candidates, including Republican nominee Donald Trump and Democratic runner-up Bernie Sanders.
"The fact that he's not a career politician speaks to a lot of people right now," said Debbie Raines, of Liberty, a part-time camp worker who voted for Greitens.
Koster took a subtle jab at Greitens on Tuesday night, denouncing a "disturbing political campaign" season that has featured "candidates shooting machine guns and doing sit-ups for the cameras." Koster pledged "careful, thoughtful leadership" that includes more funding for public schools, roads and health care.
Greitens countered by calling Koster "the poster child for career politicians," asserting to his applauding crowd: "We are coming to put an end to his political career."
As a fundraising gimmick, Greitens' campaign has sold stickers described as "ISIS hunting permits," including ones signed by the former Navy SEAL who claims he killed Osama bin Laden. But he also raked in high-dollar donations from around the country, including $1 million from Michael Goguen, a California venture capitalist accused of sexual abuse in a pending civil lawsuit. Goguen has denied the allegations.
Greitens' Republican rivals called on him to return the money, but Greitens said he won't rush to judgment as the case is pending. In the final days before the election, a Democratic affiliated political group also launched an ad attacking Greitens for keeping the money.
His Republican opponents also questioned whether Greitens truly is conservative. He attended the Democratic National Convention in Denver in 2008 for then presidential-nominee Barack Obama's speech. And Greitens once was courted by Democrats as a potential candidate.
The backgrounds of the four Republicans were one of the few ways they could distinguish themselves in the primary. All four candidates supported expanded gun rights and tax cuts. They also sharply criticized the way Nixon responded to protests at the University of Missouri in Columbia last year over racial concerns and to riots following the 2014 fatal police shooting of Michael Brown in Ferguson.
Copyright 2016 The Associated Press. All rights reserved. This material may not be published, broadcast, rewritten or redistributed.