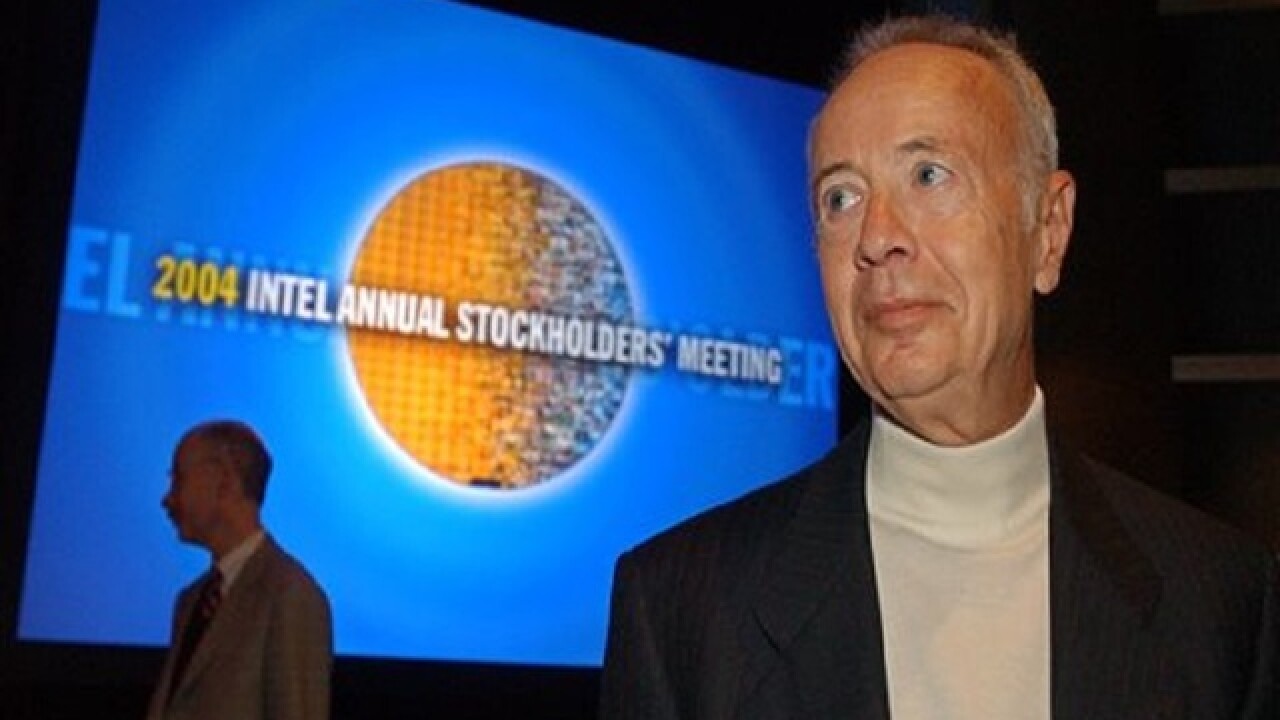 Paul Sakuma
<p>FILE- In this May 19, 2004 file photo, Intel Corp. founder Andy Grove looks on after the Intel shareholders meeting in Santa Clara, Calif. Grove, the former Intel Corp. chief executive whose youth under Nazi occupation and escape from the Iron Curtain inspired an "only the paranoid survive" management philosophy that saved the chip maker from financial ruin in the 1980s, has died. Intel said Grove died on Monday, March 21, 2016. He was 79. (AP Photo/Paul Sakuma, File)</p>

SANTA CLARA, Calif. (AP) — Andy Grove, the former Intel Corp. chief executive whose youth under Nazi occupation and escape from the Iron Curtain inspired an "only the paranoid survive" management philosophy that saved the chip maker from financial ruin in the 1980s, has died. He was 79.
Intel said Grove died on Monday. It did not specify a cause of death.
Grove, who was instrumental in building Intel into the world's largest chip company during his 37-year career there, had suffered from Parkinson's disease. He also suffered from prostate cancer in the mid-1990s.
He was a mercurial but visionary leader who helped position Intel's microprocessors as the central technology inside personal computers.
Grove's bet-the-company gamble — moving Intel from memory chips to microprocessors in the mid-1980s to serve what was still a fledgling PC industry — helped rescue Intel from a financial crisis and set it on course to becoming one of the most profitable and important technology companies of all time.
"Andy made the impossible happen, time and again, and inspired generations of technologists, entrepreneurs, and business leaders," Intel CEO Brian Krzanich said Monday.
Robert Burgelman, a professor at Stanford University's Graduate School of Business who started teaching management classes with Grove in the late 1980s, called Grove "one of the most incisive thinkers that I have ever come across." He said Grove's technical and strategic abilities were critical in building Intel and fending off threats from Asian competitors.
"I don't think Intel would have been Intel as we know it, and therefore the U.S. chip industry would not have been what it is" without Grove, Burgelman said.
Intel created the world's first commercial microprocessor in 1971, but the company's primary focus was memory chips for mainframe computers. That was until the personal computer was invented and a new use for Intel's microprocessors emerged.
Grove's leadership of that transition affirmed his status as a key figure in the digital revolution and an icon of business leadership, whose maneuvers have been studied and dissected in management classes around the world.
Yet Grove, known at times as combative and vindictive to those who crossed him, was also pilloried for his role in one of the biggest missteps in Intel's history: the company's intransigence after a major calculating flaw was discovered in 1994 in Intel's flagship Pentium microprocessor, an error that Intel had known about but deemed too insignificant too fix.
Grove's response to the outcry was to require customers who wanted to return flawed chips to call Intel and convince the company they needed a replacement. He later capitulated and set aside nearly a half-billion dollars for a no-questions-asked exchange program.
His mentality helped shape a strict, often caustic management style that is now as much a part of Silicon Valley lore as Grove's relentless focus on sharpening Intel's technological advantages.
Grove wrote several well-received books, including "Only the Paranoid Survive," a 1996 treatise on the science of managing crises, and his 2001 autobiography, "Swimming Across," a harrowing memoir of Grove's childhood. Grove also dabbled as an advice columnist, penning a series of newspaper columns on workplace dilemmas that earned him the nickname "Dear Abby of the Workplace."
A Hungarian refugee born Andras Istvan Grof who fled to America by boat in 1957 and westernized his name, Grove's life was characterized by survival against all odds.
He got past scarlet fever at age 4, though it permanently damaged his hearing. A Jew growing up in Nazi-occupied Hungary, he survived the Holocaust by moving frequently as a child, boarding with family friends and taking on an assumed name. As the defeat of the Nazis opened the door for a brutal Stalinist regime, he made his escape in a daring run for the Austrian border.
Grove immigrated to the U.S. at age 20, a penniless refugee who would go on to amass a personal fortune believed to be worth about $400 million, according to Forbes magazine.
Overcoming a sizable language barrier, he enrolled at the City College of New York, where he studied engineering and paid his way by working as a student assistant. He moved west with his wife, Eva, and earned a doctorate from the University of California, Berkeley, after which Grove landed his first post-Ph.D. job at Fairchild Semiconductor, founded by the "traitorous eight" employees who left William Shockley's legendary Shockley Semiconductor Laboratory.
Two of the eight, Gordon Moore and Robert Noyce, went on to found Intel. Noyce also invented the first commercially viable integrated circuit during his time at Fairchild. Grove was Intel's third employee, though Intel considers him one of the Santa Clara, California, company's founders.
Grove was named Intel's president in 1979, took the chief executive job in 1987 and in 1997 added the chairmanship to his duties. He stepped down as CEO in 1998, and relinquished his chairman title in 2005.
In picking Grove as its Man of the Year in 1997, Time magazine called him the "person most responsible for the amazing growth in the power and innovative potential of microchips," the core ingredient of the digital revolution.
Time wrote: "His character traits are emblematic of this amazing century: a paranoia bred from his having been a refugee from the Nazis and then the Communists; an entrepreneurial optimism instilled as an immigrant to a land brimming with freedom and opportunity; and a sharpness tinged with arrogance that comes from being a brilliant mind on the front line of a revolution."
Associated Press 2016