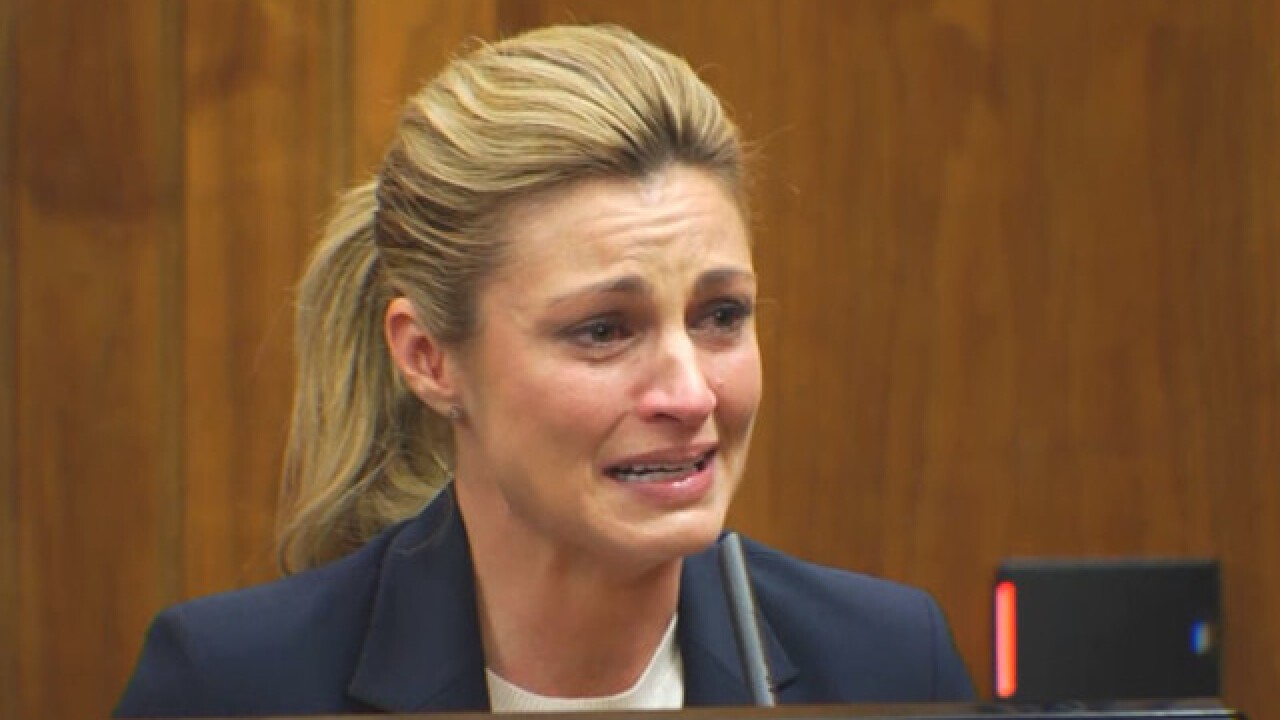 Jurors in a $75 million civil case began hearing from Erin Andrews herself on the nude video released online in 2009.

Andrews broke into tears when the attorney asked her if the video was a publicity stunt. "Everyone thought it was for publicity and attention and that ripped me apart," said Andrews.

She said that she would have called police if workers with the Marriott Hotel had let her know someone had specifically requested to stay beside her room.

Monday's court hearing began with the playing of a taped deposition from the man who stalked Erin Andrews and posted secretly-recorded nude videos of her on the Internet.

The jury was expected to hear nearly 2 1/2 hours of deposition from Michael David Barrett, the man convicted of stalking her.

In a video recording, Barrett outlined details as to how he gained access to Andrews’ room number by phoning the front desk and having them forward the call to her room.

After learning the room number, Barrett said he went to her floor, saw that the room next door was being cleaned out and requested it.

"I watch a lot of sports so that's how I knew who she was." Stalker Michael Barrett on how he knew Erin Andrews. pic.twitter.com/npKrqAxk8u

Once inside his room, Barrett said he “could hear the shower was on in her room” and knew Andrews would soon be unclothed for him to shoot video.

Barrett said he later emailed a 15-second clip to celebrity gossip site TMZ and told them he had more.

Andrews was also expected to testify during the case at some point in the case. She was seen entering the courtroom early Monday morning.

Earlier in the day, Neal Peskind, a representative of West End Hotel Partners – the company that owned the Marriott at Vanderbilt in 2008 – also took the stand.

The key question remains as to who's responsible for damages if Andrews wins her lawsuit.

Peskind argued the owners that make up West End Hotel Partners hired Windsor Capital Group, a hotel management company, to oversee the day-to-day operations of the Marriott, including employment and hiring of all staff.

He said that Windsor was hired as an independent contractor, meaning they do not act on behalf of the hotel owners, and West End was not responsible for decisions made by Windsor in their operation of the hotel.

The jury has since taken a break for lunch. Stay up to date with the latest developments  by following @NC5_JasonLamb on Twitter: