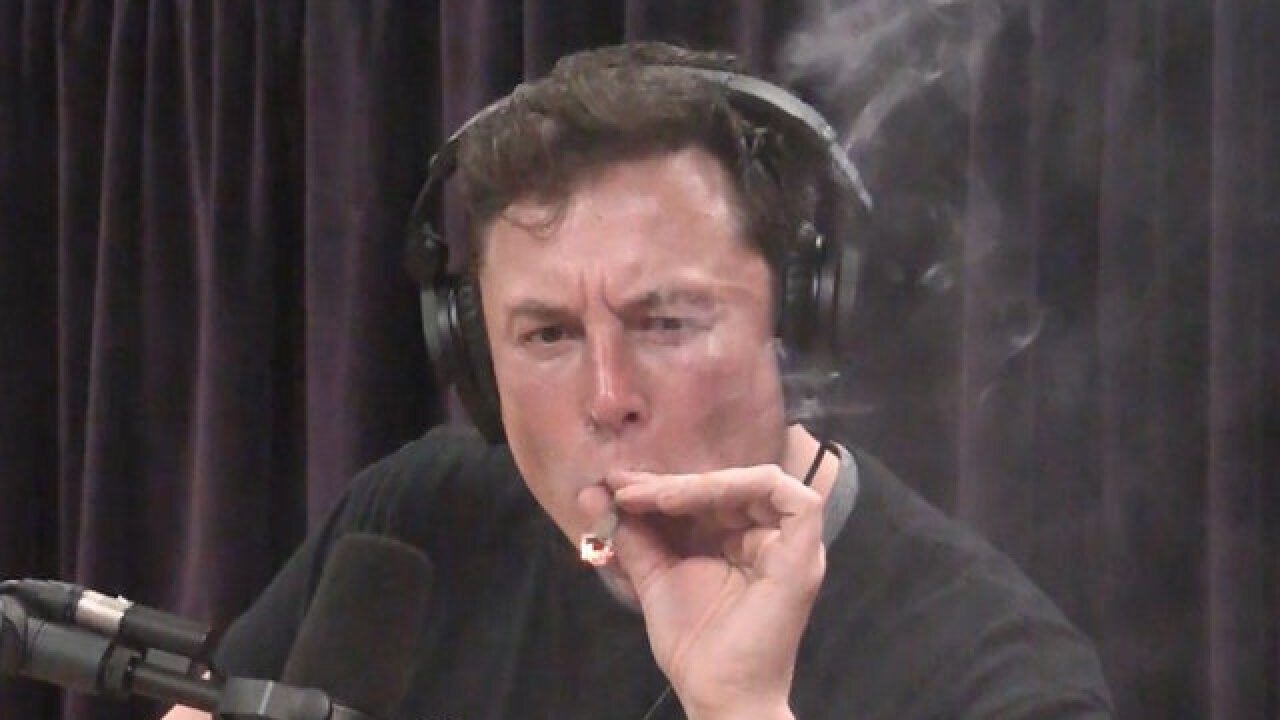 Copyright 2018 Scripps Media, Inc. All rights reserved. This material may not be published, broadcast, rewritten, or redistributed.
YouTube/PowerfulJRE
<p>Musk told Rogan that he's not a regular weed smoker.</p>

There was whiskey, a joint, a Samurai sword and long conversations about artificial intelligence and the end of the universe.

Just another installment in the extraordinary saga of Elon Musk, the billionaire leader of two major companies that are trying to change the world.

The CEO of electric-car maker Tesla and rocket startup SpaceX spent more than two-and-a-half hours Thursday night talking to podcast host Joe Rogan about what it's like inside his head ("a never-ending explosion"), keeping a car company in business ("very difficult") and trying to get governments to regulate artificial intelligence ("nobody listened").

Musk has come under heavy pressure in recent weeks over his botched attempt to take Tesla private and his erratic behavior. But in the interview with Rogan, which was streamed on YouTube, he appeared at ease.

The South African-born entrepreneur wielded a flamethrower, unsheathed a Samurai sword and held forth on a wide range of subjects:

Being Elon: 'I don't think people would like it that much'

Musk touched on the difficulties of having the kind of brain that has enabled him to build and run multiple high-tech companies at the same time.

The inside of his head is like "a never-ending explosion" with ideas bouncing around all the time, he said, adding that he finds it "very hard" to turn his brain off.

Running Tesla is his "hardest" job, he told Rogan.

The car company has struggled to scale up production of its Model 3 sedan, which has been hit by a number of delays, intensifying the pressure on Musk.

"It's very difficult to keep a car company alive," he said.

Smoking weed: 'It's like a cup of coffee in reverse'

Musk raised eyebrows on social media after accepting what Rogan said was a joint of marijuana and tobacco and taking a puff. "I mean, it's legal, right?" he asked.

Marijuana is legal in California, where the interview took place, but Musk's phone later started buzzing. "I'm getting text messages from friends saying, 'What the hell are you doing smoking weed?'" he said.

Musk explained that he's "not a regular smoker of weed" because he "doesn't find it's very good for productivity."

"It's like a cup of coffee in reverse," he added.

Musk already alarmed some Tesla investors by admitting in an emotional interview last month with The New York Times that he takes the prescription drug Ambien because he has difficulty sleeping.

He has denied he was smoking weed when he sent his now infamous tweet on August 7 claiming he had secured funding to take Tesla private.

The interview touched on one of Musk's favorite themes: ways to revolutionize transportation.

Musk said he had come up with preliminary designs for a supersonic, electric plane that would take off and land vertically.

But he doesn't plan to pursue the idea anytime soon, as he is too occupied with Tesla, SpaceX and other projects.

"I have a lot on my plate," Musk said. "An electric plane isn't important right now."

He insisted that his plans to dig tunnels under cities to whisk commuters around in high speed pods are the best solution to traffic jams. But he expressed frustration about his efforts to build a tunnel under Los Angeles.

"Maybe it will be successful, maybe it won't," Musk said. The city "is a terrible place to dig tunnels," he added. "Mostly because of paperwork."

The tech entrepreneur ruled out the prospect of flying cars, saying they would be too noisy and impractical.

"If you get one of those toy drones and imagine it's 1,000 times heavier — that's not going to make your neighbors happy," he explained.

"If you want a flying car, just put wheels on a helicopter," he added.

Artificial intelligence: 'If you can't beat it, join it'

Musk said his efforts to merge the human brain with machines are making progress.

His venture Neuralink will have "something interesting" to announce in a few months that will be "an order of magnitude" ahead of what people currently think is possible, he said.

Neuralink aims to link humans to computers without a physical connection by implanting tiny electrodes into the brain.

Musk has repeatedly expressed concerns about the dangers of unrestrained development of artificial intelligence but says his push for a more cautious, regulated approach has been "futile."

He told Rogan he thinks that merging humans with computers is the approach that "seems probably the best for us: if you can't beat it, join it."