Democratic candidates trace careers of service to memories of September 11, 2001 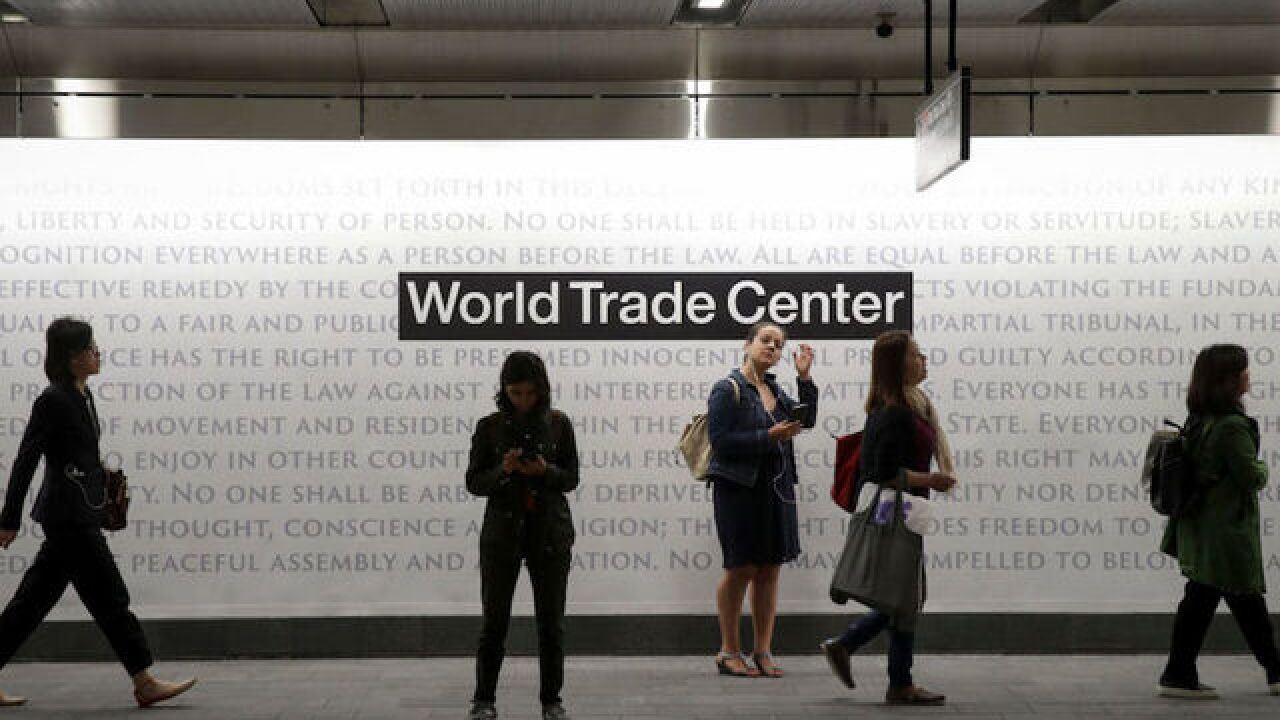 Image copyright 2018 Getty Images. All rights reserved. This material may not be published, broadcast, rewritten, or redistributed.
Drew Angerer
<p>People wait for a train on the platform at the newly opened Cortland Street 1 train station September 10, 2018 in New York City. The Cortland Street 1 train station was buried in debris following the 9/11 terrorist attacks and had been closed since that day 17 years ago. The newly renovated version of the station opened on Saturday. </p>

Before September 11, 2001, Elissa Slotkin was a 20-something graduate student at Columbia University with an interest in foreign affairs. After she watched the second plane hit the World Trade Center from a student lounge, her life's trajectory was changed forever: She changed her course of study, later met with recruiters from the CIA and signed up for a job that would take her on three tours of Iraq during the War on Terror.

Slotkin, 17 years removed from that fateful day, is now running for Congress, one of a handful of Democratic veterans and service candidates carrying the party's mantle in a host of competitive midterm races who trace their service back to what they saw and felt on September 11.

"I did not go into graduate school thinking I would choose national service as a career," she said, reflecting on what was her second day at Columbia. "By the end of that day, I knew national service was what I was going to do."

Candidates like Slotkin represent a generation of political leaders shaped by the September 11 attacks. These candidates, propelled to service by a sense of duty, anger and resolve, are now putting their military service at the forefront of their campaigns and rewriting the way Democrats talk about the War on Terror.

National Democrats, sensing a prime opportunity to retake the House in 2018, have intentionally turned to veterans and service-focused candidates in November. A slew of super PACs aimed at nurturing these candidates, some who have no political experience at all, have formed and the Democratic Congressional Campaign Committee has financially backed a number, too.

The effort is reminiscent of a similar strategy employed in 2006 by then-DCCC chairman Rahm Emanuel, who recruited and backed veterans in a series of close races. But this year it comes at a time when voters, in the eyes of political operatives, are deeply skeptical of cookie-cutter politicians and searching for unique nominees who break the mold.

In the past 17 years, dozens of lawmakers and political candidates from both parties have cited the events of 9/11 as an inspiring reason for seeking public office. But Democratic operatives have actively sought out and supported veterans running in recent years to help spotlight compelling candidates and bolster Democratic national security credentials, a significant development for a party in which many opposed the Iraq War and have criticized military involvement overseas.

Slotkin, a candidate running to represent an area of Southern Michigan between Lansing and Detroit, has made her service central to her campaign and is currently running an ad dedicate to her post-9/11 decision.

"For me, service was working for two presidents, one from each party," Slotkin says in an ad. "I approve this message because we need members of Congress who remember it's about service to country, not themselves."

Jared Golden, a Democrat trying to unseat Republican Rep. Bruce Poliquin in Maine's 2nd Congressional District, ran an ad earlier this year tracing the history of his life from the point he decided to join the Marines, and on Monday he released a spot that featured him firing a rifle.

And Jason Crow, a Democrat running in Colorado, is using a similar strategy, running an spot titled "Serve" that highlights his history of working construction in college before enlisting in the Army after September 11, 2001.

"9/11 happened and I couldn't ask people that I knew to do my fighting for me," he says over images of his time in Afghanistan and Iraq. Crow has also suspended any campaigning on Tuesday.

All three Democrats have complex -- and different -- views of war and terrorism, shaped by the era in which they came of age. But they are all looking to convince voters that what Washington needs is more service leadership in Congress, something they all gained because of the decisions they made after the attacks.

"I think it was quintessential moment of my generation. Everyone I know can remember where they were and who they were with and what they were doing on 9/11," Slotkin told CNN, comparing it to putting a man on the moon or the assassination of John F. Kennedy. "For my generation, especially as a young professional at the time, it was a monumental, generational event and it changed my perceptive on the world, the country, what it means to serve and why we need to serve."

'I never dreamed I had any future in politics'

September 11 was a formative day in the lives of each of these candidates. But when asked to reflect on what they felt that day and the following weeks and months, most said that politics was the furthest thing from their minds.

Golden was a newly enrolled college student in Maine on September 11, 2001. While he had considered military service, he was planning to become a history teacher. But after the attacks, Golden's life changed when he enlisted with the United States Marine Corps before telling his parents.

"When I was 19 years old and going to boot camp, I never dreamed I had any future in politics," Golden said. "My thought was service to country, it just seemed like the right thing to do. ... I wanted to serve my country. I was upset about 9/11."

Golden, a Democrat, added that he remembers being moved by President George W. Bush's State of the Union address in early 2002, where he outlined steps his administration would take against terror.

Following the speech, he said, "I made the decision to leave the university after I came across a Marine Corps table on campus."

Crow, a Democrat running to represent suburban Colorado, was in the ROTC at the University of Wisconsin-Madison on September 11. But, in the wake of the attacks, he opted to enlist in the Army and serve an active duty role in the invasion of Iraq.

"At that time, I did not realize the extent to which it was going to change the trajectory of my life," he said. "It impacted every American in a different way and certainly the victims and their families we have to remember the most, but it certainly changed the trajectory of my life and my service to the country and everything that has come after that can be traced to the moment in time."

Crow, now years removed from his three combat tours in Iraq and Afghanistan and aiming to unseat Rep. Mike Coffman, himself a retired Marine Corps and Army veteran from the first Gulf War, said the experience changed his world view, making it clear that people are willing to sacrifice anything for the country they love.

To date, thousands of men and women have died in the War on Terror, according to the Department of Defense Casualty Report. It's those men and women, Crow said, who more impacted his view on leadership after returning home.

"I think every combat veteran wakes up every morning and there isn't a day that goes by where you don't think about those soldiers," he said. "You feel an obligation to make sure that sacrifice was not made in vain."

At a time when voters say they are over partisan bickering in Washington, veterans and service candidates make the case that they get work done without arguing over politics.

Practically, too, she said her time at the CIA and working with the military taught her about "planning, discipline, practicality and knowing that even when you have a tough problem put in front of you, you have to come up with a solution."

Golden echoed that sentiment and added just because he is a Democrat doesn't mean he thinks Republican candidates with service backgrounds don't bring the same tools to the table.

"Wouldn't we be better," he concluded, "if our politics (were) the same?"