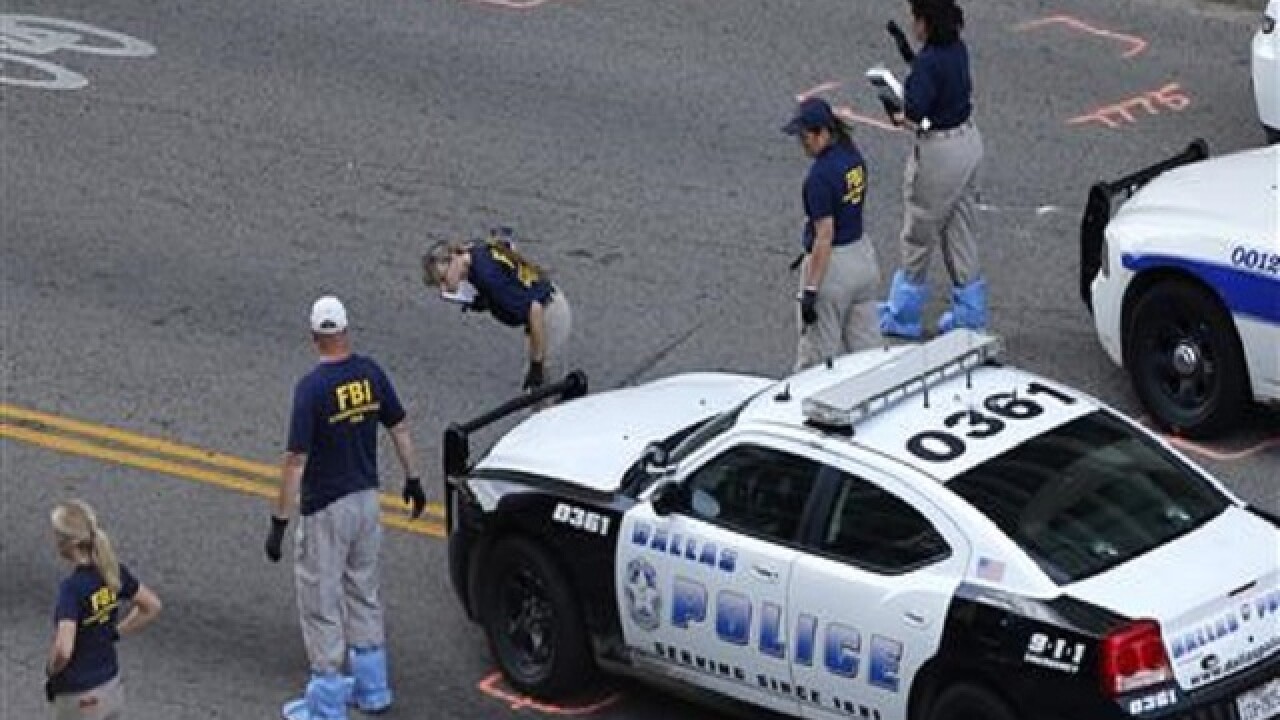 By: Associated Press
Posted at 6:44 PM, Jul 10, 2016
DALLAS (AP) — The suspect in the deadly attack on Dallas police taunted authorities during two hours of negotiations, laughing at them, singing and at one point asking how many officers he had shot, the police chief said.
The chief and the county's most senior elected official also said Sunday that Micah Johnson had larger attack plans and possessed enough explosive material to inflict far greater harm.
"We're convinced that this suspect had other plans and thought that what he was doing was righteous and believed that he was going to target law enforcement — make us pay for what he sees as law enforcement's efforts to punish people of color," Dallas Police Chief David Brown told CNN's "State of the Union."
Johnson, a black Army veteran, insisted on speaking with a black negotiator and wrote in blood on the wall of a parking garage where police cornered and later killed him, Brown said.
The gunman wrote the letters "RB" and other markings, but the meaning was unclear. Investigators are trying to decipher the writing by looking through evidence from Johnson's suburban Dallas home, Brown said.
The writing suggested that Johnson was wounded in a shootout with police. An autopsy will confirm exactly how many times he was hit, Dallas County Judge Clay Jenkins said.
Authorities do not "have any independent report from an officer saying, 'I think I hit him,'" Jenkins said.
Dallas police said neither they nor the FBI would confirm that photographs circulating on the internet were from the scene early Friday where police killed Johnson with a bomb.
Two photos online show an assault rifle in rubble and the bloodied body of a black man wearing an armored vest amid building debris.
The police chief defended the decision to kill Johnson with the bomb delivered by remote-controlled robot, saying negotiations went nowhere and that officers could not approach him without putting themselves in danger.
Brown said he became increasingly concerned that "at a split second, he would charge us and take out many more before we would kill him."
The shootings marked the deadliest day for U.S. law enforcement since the Sept. 11, 2001, terrorist attacks. Five officers were fatally shot just a few blocks from where President John F. Kennedy was slain in 1963.
So far, the evidence points to the attack being a "crime of opportunity," Jenkins said.
Investigators believe Johnson had been practicing and training for a long time and probably learned of the protest from social media and concluded there would be many police present.
Authorities have said the 25-year-old gunman kept a journal of combat tactics and had amassed a personal arsenal at his home that included bomb-making materials.
The fact that Johnson had material for explosives and talked of using homemade bombs during the standoff with police indicated he could have inflicted more damage with more time, Jenkins said.
"If this had not been a crime of opportunity where the protest was quickly organized in response to events in the same week ... he could have caused a lot more harm than he did," he said.
Federal agents are trying to trace the origin of the weapons used in the attack, including a military-style semi-automatic rifle.
About 30 agents are also involved in identifying bullet casings, said William Temple, the Dallas agent in charge for the Bureau of Alcohol, Tobacco, Firearms and Explosives.
The large crime scene includes the parking garage where Johnson was killed and at least two other sites where he is believed to have fired at officers.
Johnson was a private first class with a specialty in carpentry and masonry. He served in the Army Reserve for six years starting in 2009 and did one tour in Afghanistan from November 2013 to July 2014, the military said.
The attack began Thursday evening while hundreds of people were gathered to protest the police killings of Philando Castile, who was fatally shot near St. Paul, Minnesota, and Alton Sterling, who was shot in Louisiana after being pinned to the pavement by two white officers.
Video showed protesters marching along a downtown street about half a mile from City Hall when shots erupted and the crowd scattered, seeking cover.
Among those injured were two officers from El Centro College, the school said Sunday night.
El Centro said in a statement posted on its website night that Cpl. Bryan Shaw and Officer John Abbott were hurt in Thursday's attack.
Shaw was struck by a bullet as he guarded an entrance to the college, the statement said. The school said Shaw was treated on scene and returned to protect other officers and civilians.
Abbott was also guarding the entrance. The school said he sustained injuries to both legs from flying glass after it was struck by bullets. Abbott tended to his wounds at the scene and then returned to assist others, the statement said.
Both men were resting at home.
Dallas police previously said seven officers and two civilians were hurt in the attack. Its number of wounded did not include any El Centro College officers
Copyright 2016 The Associated Press. All rights reserved. This material may not be published, broadcast, rewritten or redistributed.