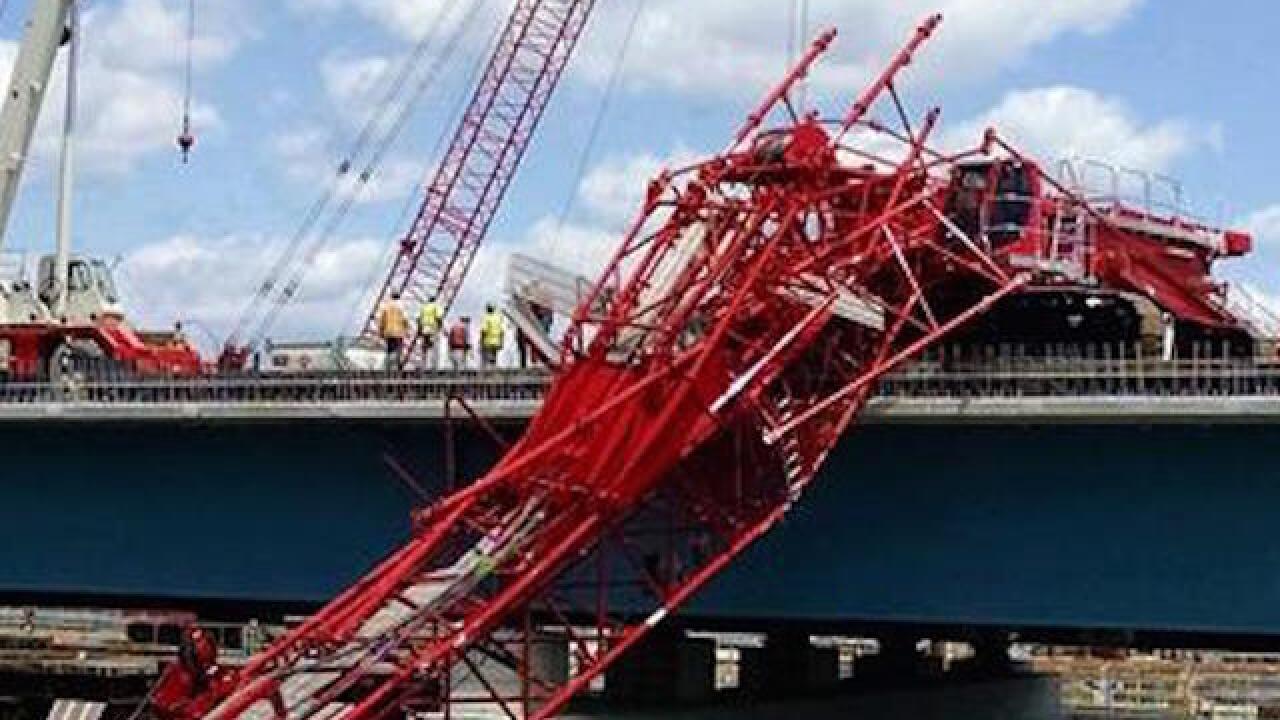 <p><span style="color: rgb(51, 51, 51); font-family: Verdana, Helvetica, Arial, sans-serif, Geneva; font-size: 11px; line-height: 15px;">A giant crane sits on the Tappan Zee Bridge north of New York City after toppling around noon on Tuesday, July 19, 2016, during construction of a new bridge, across the Hudson River between Westchester and Rockland counties. The base and treads of the huge, moveable crane sat on the unfinished new bridge while part of the toppled crane lay across the lanes of the old bridge and another section lay across a construction platform in the water between the two spans. (David Leibstein via AP)</span></p>

NEW YORK (AP) — A huge crane toppled off a new bridge under construction and collapsed across the busy span it's replacing, bringing cars on the key Hudson River crossing to a halt before parts of it reopened several hours later.

Democratic Gov. Andrew Cuomo said the crane was performing routine work on the new Tappan Zee Bridge on Tuesday, driving pilings into the river bottom, and it was unclear what caused its boom to fall across the entire 90-foot, seven-lane width of the old bridge. Cars swerved to avoid the machinery, and at least one person was loaded into an ambulance.

"Miraculously, there were no serious injuries," said Cuomo, who briefed reporters at the scene. "If you said to me that a boom could fall across the Tappan Zee Bridge at noon, not hit a car ... I would not believe it."

Nicholas D'Emealio, of Irvington, was in a vehicle about three football fields away from the crane, toward the center of the 3.1-mile-long bridge, when he heard a bang and his driver slammed on the brakes.

"It shook the whole bridge," he said. "At first I thought the bridge was collapsing because this is not a good bridge."

Everybody was OK but stranded. D'Emealio and his friends got out of their vehicle and threw around a football to pass the time.

The base and treads of the movable crane sat on the unfinished new bridge. Authorities didn't immediately say how tall the crane was.

After the crash, several boats carrying emergency workers maneuvered in the river around the collapsed crane arm, while other workers appeared to be scanning the water around the wreck.

Rockland County had a helicopter and marine unit at the scene, county Executive Ed Day said. He tweeted that the crane operator was shaken but not hurt.

The new Tappan Zee Bridge has been under construction for three years and is expected to be completed by 2018 at a cost of $3.9 billion. It is being built alongside the original Tappan Zee, which dates to 1955.

In March, a 90-foot-long tugboat hit a construction barge near the bridge site and sank, killing three crew members.

In 2013, a powerboat plowed into a construction barge at the bridge, killing a bride-to-be and her fiance's best man. The boat's driver, who had nearly twice the legal limit of alcohol in his system, pleaded guilty to vehicular manslaughter and was sentenced to two years behind bars. The victims' families, however, attributed the crash mainly to bad lighting on the barge.