'We are all in this together': Colorado governor expects thousands of COVID-19 cases, urges social distancing 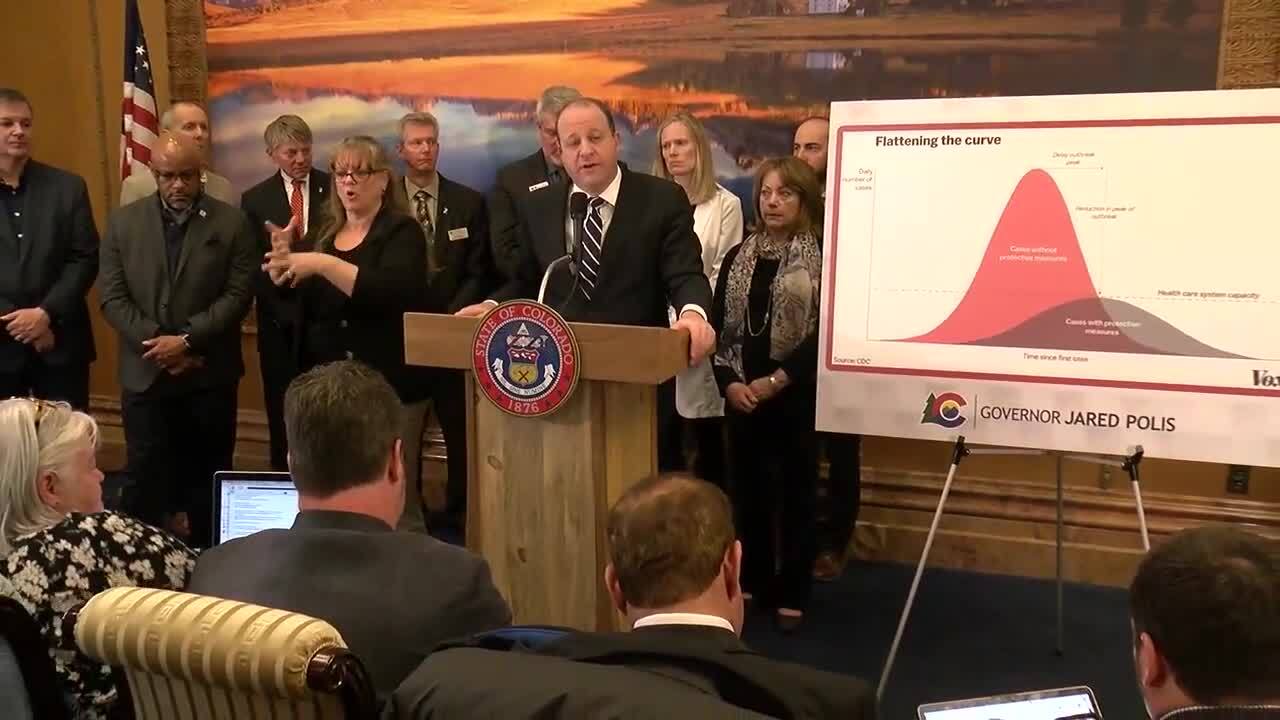 Copyright 2020 Scripps Media, Inc. All rights reserved. This material may not be published, broadcast, rewritten, or redistributed.
Denver7
Coloradans should expect either themselves or a friend, family member or someone they know to contact the novel coronavirus (COVID-19) in coming weeks but need to make stringent efforts to keep from spreading it to others, Colorado Gov. Jared Polis said Friday. 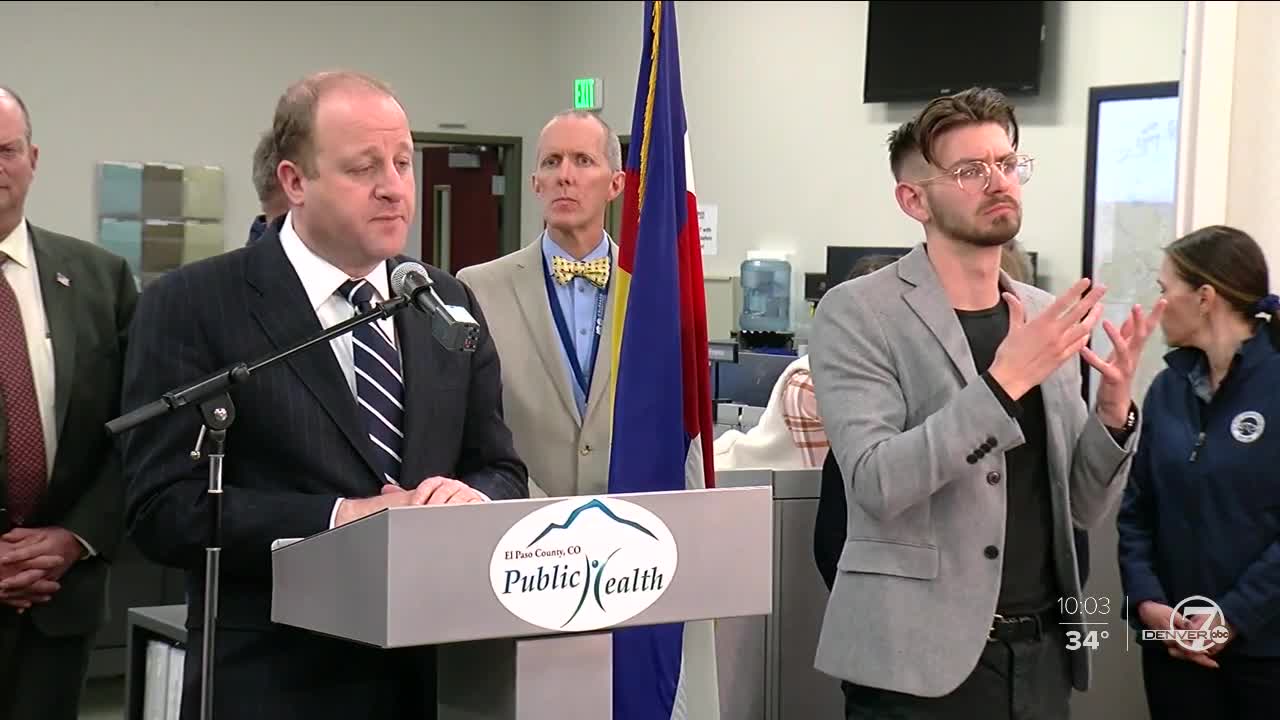 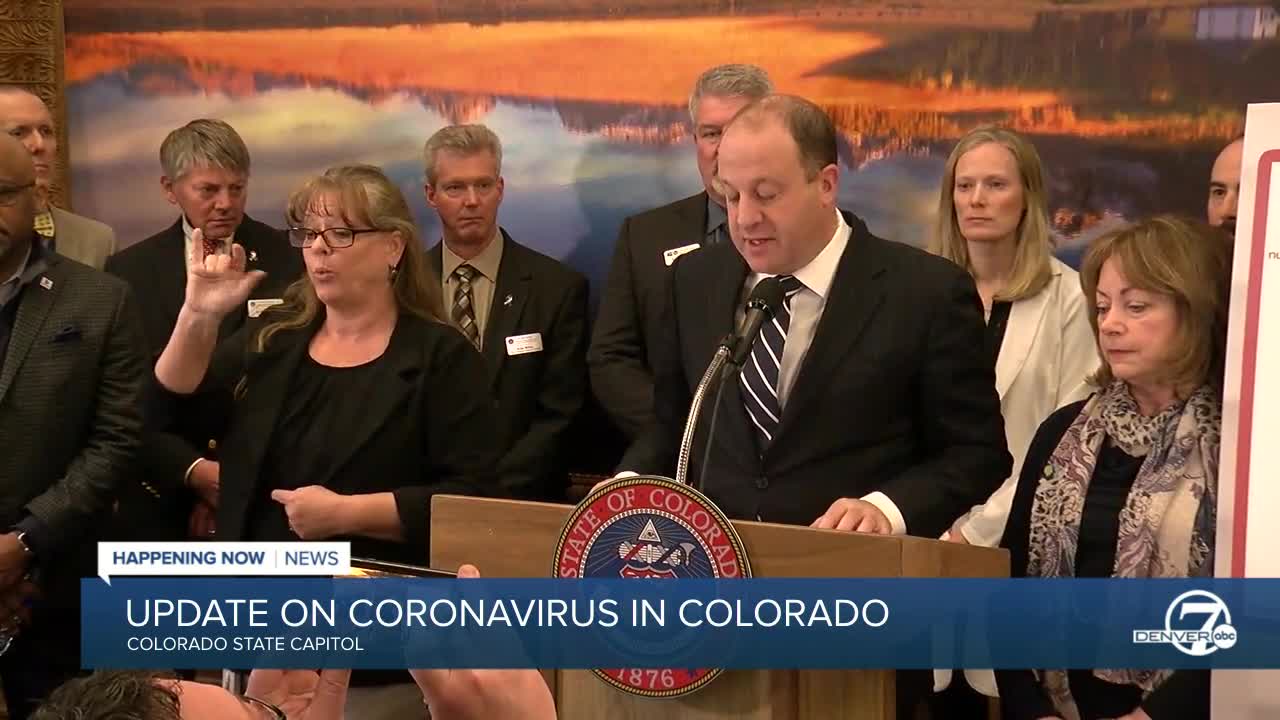 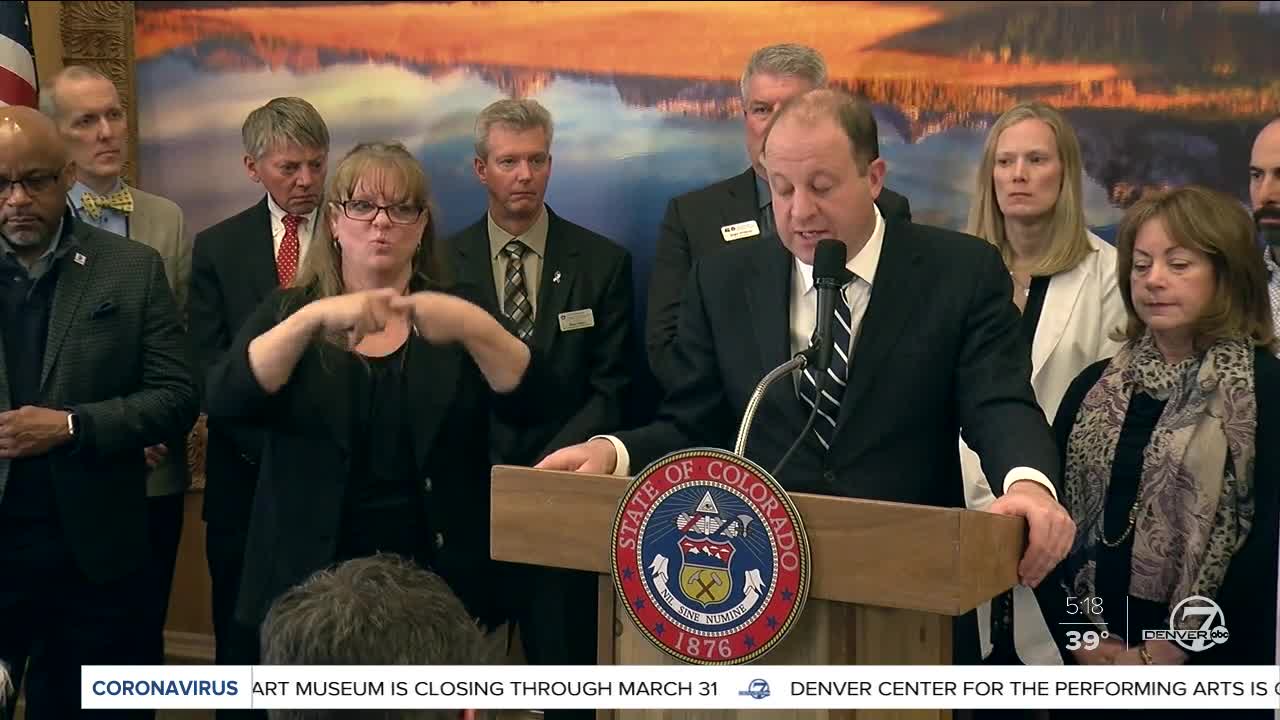 DENVER – Coloradans should expect either themselves or a friend, family member or someone they know to contact the novel coronavirus (COVID-19) in coming weeks but need to make stringent efforts to keep from spreading it to others, particularly people over age 60 and those with weakened immune systems or other underlying medical conditions, Colorado Gov. Jared Polis said Friday.

“We are in the middle of one of the greatest public health disasters of our lifetime, an internationally-declared pandemic by the World Health Organization, and it’s critical for us to take it seriously to protect our most-vulnerable Coloradans and protect the ability of our state’s health care system to treat them and treat others who need treatment,” Polis said.

Coronavirus in Colorado: COVID-19 latest updates across the state

Polis announced that there were 72 presumptive positive cases of the coronavirus in Colorado after results for about 650 had come back by 10:30 a.m. Friday. He said that about 1,500 tests had been completed in the state as more private testing capabilities come online.

Of the 72 cases, Polis said at least four of them showed signs of community spread – both in the High Country and in the Denver metro area. He said that eight people are currently hospitalized because of the virus and three are in critical condition. He said it was “just a matter of time” until Colorado sees its first death from the virus.

At 3 p.m., the CDPHE announced that a woman in her 80s living in El Paso County who had underlying health conditions is the first person confirmed to have died of the virus in Colorado.

There are “likely thousands of cases in Colorado not yet tested or whose tests are still pending,” Polis added.

But Colorado is leading the nation in its testing and response efforts, Polis said. The Centers for Disease Control and Prevention (CDC) said Thursday that 11,000 Americans had been tested for COVID-19 and that the Colorado Department of Public Health had done 1,500 tests – meaning about 10% of the tests done in the U.S. were done in Colorado, Polis said.

“We are a leader in testing,” Polis said. “Now, that’s relative to the rest of the nation, but it is far from enough here in Colorado and nationally.”

He and the public health and emergency management officials alongside him continued to urge people who feel they have symptoms of either allergies, a cold, the flu or coronavirus to isolate themselves and consult with a medical provider as to whether they should be tested for the virus. The state updated its testing criteria on Thursday and issued guidance for uninsured people.

Polis and CDPHE Incident Commander Scott Bookman said that testing and early detection would be pertinent to determine which Coloradans need to quarantine themselves for 14 days – beyond the isolation period required while they consult a doctor and wait for test results if they are tested. They said that would help keep people from going back to work or to public places with COVID-19 even if they think they may have recovered.

He said he would “continue to push the federal government, as well as the private partner sectors, to scale up testing.”

Polis praised Pitkin County for putting up its own mobile testing lab and for the private partners who have been working to do the same, but he acknowledged that the federal response should have been more robust sooner in order to increase testing exponentially.

“We need to dramatically increase our testing capacity. Frankly, we needed to greatly increase our testing capacity months ago. I’ve personally shared this frustration with the vice president. The truth is that the lack of early action out of Washington to ensure the availability of mass testing has hampered our ability to avoid mass disruption to our lives and economy, as well as put the health of many of our most vulnerable at a higher risk,” Polis said.

“But we can’t dwell on what happened a month or two ago. This isn’t political. We need to focus on moving forward, and we need all hands on-deck. We need to bring the full weight of our health care system to bear – federal state, public, private, nonprofits – everybody. This will be an enormous strain on our systems and our workforce,” he added.

The governor announced an emergency guidance to cancel large public gatherings of more than 250 people unless the venue can successfully ensure people will keep a six-foot distance between parties. And Denver Mayor Michael Hancock said he would be talking with Denver’s larger venues, faith leaders and others about guidance on how to implement the rule.

Polis also announced an executive action to try to bring more medical professionals into the mix, including some who are no longer working in the business.

One facet would be asking the Department of Regulatory Agencies to allow pharmacists, nurses and doctors licensed in other states to get immediately licensed to practice in Colorado through reciprocal licensing.

Another would be asking doctors and nurses who have active licenses in Colorado – or even those who might need to be reauthorized – who are not currently working in the medical field to check in with their past employers about possibly working again in the event that Colorado reaches surge capacity and more medical professionals are needed.

Officials expect some in the medical field will contract the virus themselves and have to quarantine for 14 days, which could put medical treatment under severe pressure because of professional shortages.

Additionally, the CDPHE will authorize every EMT and paramedic in the state to administer the test, though some might not have to. And National Guard members called in to help with the response who are trained medics will be training field offices on how to handle testing, Polis said.

And Polis said he had asked the CU Anschutz Medical School to tap into its nursing, doctoral and pharmaceutical grad students to help with work if they have the capacity to perform clinical and testing work.

The governor urged people considering elective surgeries or procedures to reconsider so as to not put additional stress on the medical field so it can deal with virus patients.

And he said that he would be issuing final orders Friday on nursing facilities that house seniors in order to protect the population most vulnerable to the virus.

What the future holds

All of these efforts, Polis said, are being done in order to try to limit the spread of the virus in Colorado, particularly for people over 60 and those with compromised immune systems, whom data show are the most susceptible to contracting severe or deadly cases of the virus.

“There is no successful effort to contain this virus in the United States of America, it is here,” Polis said. “The contagion is here. People will get the virus. In fact, many Coloradans will get this virus, but then for many, it will have mild or negligible symptoms.”

But he said that not flattening the curve, and ending up with a quick and high rise in the number of cases of the virus as has happened in Italy, would be “a horrific scenario that we do not want to occur in Colorado,” in which there would not be enough hospitals or ventilators to care for patients with coronavirus and patients with other ailments that require serious care.

“Many Coloradans, and many Americans, under some projections most Americans, will likely get coronavirus,” Polis said. “…You’re going to get it, or a friend will get it, or a family member. Somebody you know is going to have coronavirus. … Our goal is to spread it out and protect the most vulnerable population – our seniors and those whose lives are at risk because of this virus – and that’s what the steps we are taking are seeking to do.”

He said that all Coloradans have a role to play in lowering the trajectory of the spread.

“This is a shared recognition that the public health consequences, the human consequences, need to remain our primary focus. This is how we’re going to weather the storm, protect our most vulnerable and prevent a catastrophic overload of the health care system and prevent deaths,” Polis said.

He reiterated that people should follow proper hygienic protocol, limit their interaction with large groups, try to stay at least 6 feet away from other groups of people, isolate themselves if they feel ill, and get tested if they have symptoms of a lower respiratory infection or fever. And he urged people who have the means to donate to shelters, soup kitchens and pantries for the families who can’t afford those extra supplies.

But he said that his administration’s public efforts and those of the news media were aimed at promoting “awareness but not panic” in order to not incapacitate health systems.

‘This is really an extraordinary moment, and it calls for extraordinary measures,” Polis said. “The longer that other states and other cities and other countries hesitate, the greater the risk becomes. And dealing with this public health crisis needs to be our top focus. It really supersedes all our other concerns.”

Polis said that UCHealth, Centura Health, Kaiser Permanente and some community health centers are able to collect samples, and that LabCorp and Quest Diagnostics were able to turn around tests in 2-4 days.

Denver’s drive-up COVID-19 testing facility will reopen Saturday, but at a new location: the Denver Coliseum, located at 4600 Humboldt Street in Denver.

The testing site will be open from 10 a.m. to 2 p.m. Saturday and will be able to serve the first 100-150 people in line, the Colorado Department of Public Health said.

Bookman, the CDPHE incident commander, said the state was still receiving tests from the CDC but that there are still limits on swabs being available and reagent kits they were hoping to get more of. And Polis said more testing capability was coming online in the private sector that would greatly ramp-up testing too.

But overall, he urged Coloradans to remain calm and to continue to follow news developments and medical advice coming from the state on the viruses in order to keep the spread as limited as possible.

“We are all in this together and we’re going to get through this together. And I know that it can be difficult, it can seem surreal. But leadership means telling the truth and making the calls that are scientifically-indicated to protect our health, the public safety and the lives of our fellow Coloradans,” Polis said. “If we were to take no action now, we would suffer worse consequences in the coming weeks and months and it’s critical that we prevent an overload of our health systems if we’re going to avoid widespread devastation.”