Experts: Art can be a source of therapy during pandemic, even for those without artistic skill

Experts: Art can be a source of therapy during COVID-19 pandemic 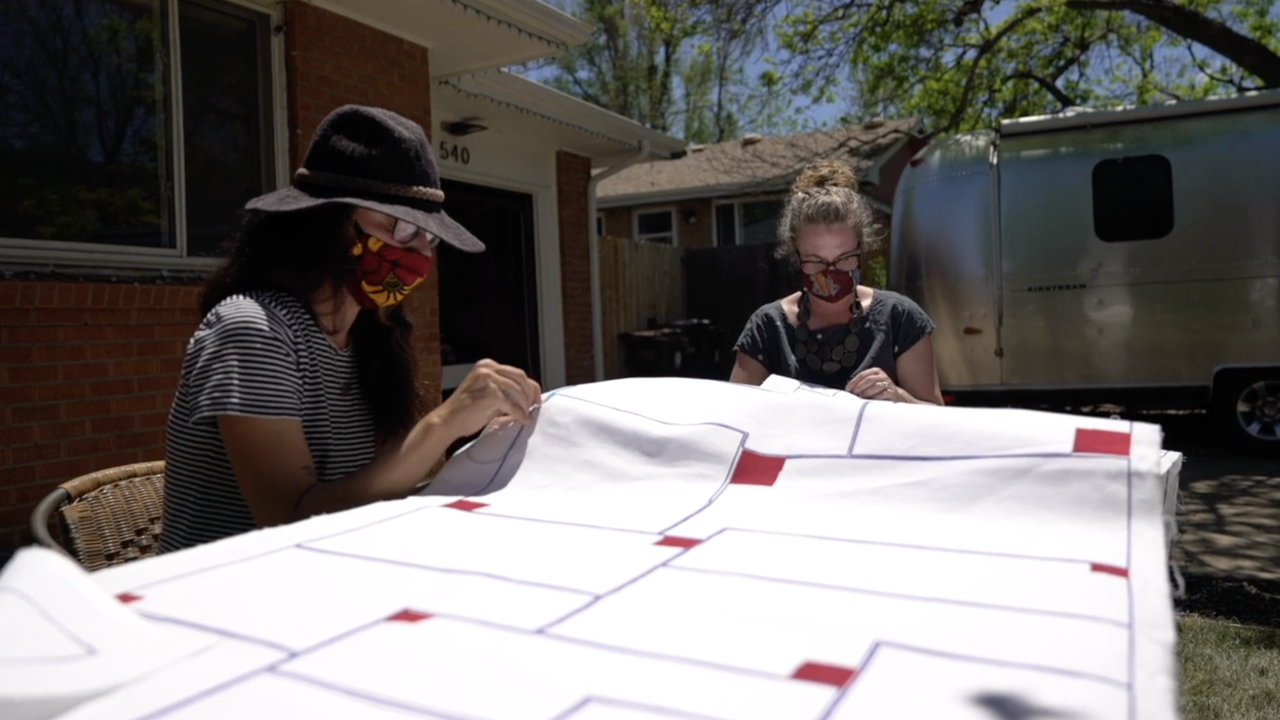 The tapestry is long. In total, about 25 feet. It is an amalgamation of red and blue boxes stitched to fit snugly next to one another, and each day, the tapestry expands by feet at a time.

"The act of stitching, for me, is very meditative,” said Schulte, as she continued to add stitches in her front yard.

The project began as a way to give a visual representation of the global pandemic; something more tangible than numbers on paper, according to Schulte. But it quickly evolved into a catharsis, a release from the stress of being isolated from her normal life.

Then, in April, her tapestry became even more personal.

"On April 11 my uncle was diagnosed,” said Schulte. “Two days later, he was taken to the hospital and did not survive the coronavirus infection that he had. It’s become a way to meditate, hold vigil, commemorate the people who have suffered and who have died and their family members, and their care givers, and the doctors, and nurses who are working overtime to manage the crisis right now.”

Dr. Ellen Winner is a professor of psychology at Boston College and author of the book How Art Works. She says art can provide and outlet for healing, even for people without an artistic skill.

"There’s no question art leads to well-being,” said Winner. “It is a way of distracting yourself and focusing very carefully on something. It really pulls you away from what you might be upset about.”

Because of art’s interpretive nature, Winner says it doesn’t need to be something traditional in terms of painting, drawing, or playing music. Doing something such as DIY projects, or even rearranging a room can help tap into one’s creativity and offer a source of therapy.

“If it makes you feel better that is a practical purpose,” she said.

“There are so many things that you’re feeling that you can’t express through words, and art creates this--whether it’s through metaphor or some sort of indirect expression, being able to open up,” said Laura Kim.

Kim and her collaborator, Kevin Sweet, turned to creating seed packets they place along a local creek in Boulder, Colorado as a way to help engage others. It’s interactive, they say, and offers mutual benefits as people plant the seeds and care for what grows.

"We wanted to create, instigate, this kind of platform or way for storytelling to happen,” said Kim.

Only a few blocks away, Robbie Herbst has been hosting socially-distant violin concerts for people in his neighborhood. He says each Tuesday night, between 50 and 100 people gather in the street, spreading themselves apart to enjoy the music and return to some semblance of normalcy.

"When you’re focusing on playing in tune and playing in sound nothing else really matters,” he said laughing.

Herbst freelances as a violinist for area orchestras and teaches private lessons. Since the pandemic has stopped, that routine he says he now plays for his own benefit, as well as the benefit of others.

“[Being stuck inside] makes it feel like the walls are closing in,” Herbst said. “[Playing violin] just feels very invigorating, and it makes you want to take risks and find maximum expression in what you’re doing, and that’s extremely liberating and gratifying.”