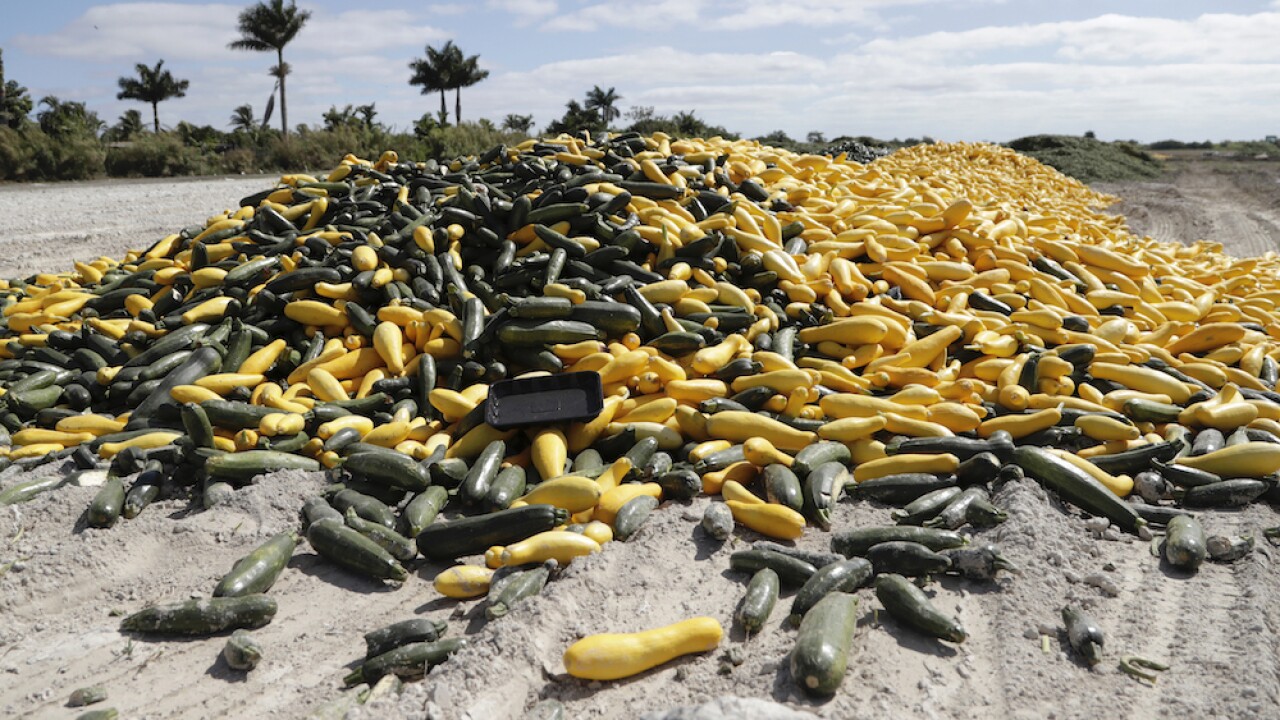 Copyright 2020 The Associated Press. All rights reserved.
Lynne Sladky/AP
**HOLD FOR STORY BY TAMARA LUSH**A pile of ripe squash sits in a field, Saturday, March 28, 2020, in Homestead, Fla. Due to the new coronavirus pandemic many farmers are unable to sell to their usual clients such as schools, restaurants, and theme parks. (AP Photo/Lynne Sladky)

As schools, restaurants and other businesses cancel large orders for produce and dairy, America's farmers have been forced to throw out thousands of tons of fresh food.

While grocery stores are struggling to keep essential, non-perishable items like toilet paper and dried pasta in stock, farmers who rely on business from wholesalers have been forced to dump thousands of gallons of fresh frutis, vegetables and milk.

According to The New York Times, the coronavirus pandemic has completely altered markets away from commercial food services to grocery stores and retail. As a result, farms that rely heavily on large contracts from companies that service schools, colleges and chain restaurants suddenly have no one to buy their product.

As a result, much of their perishable produce has gone to waste. Dairy Farmers of America estimates that farmers are dumping as many as 3.7 million gallons of milk each day, according to The New York Times.

According to Politico, some grocery chains like Kroger as working with foodservice companies like Sysco and U.S. Foods to share labor and keep store shelves stocked. But for farmers and foodservice companies alike, it's a difficult and expensive process to pivot from wholesale to retail. Sending food to grocery stores means new packaging and a higher standard for produce, things that take time and money to develop.

In addition, for many farmers, it's not possible to pause production and wait for demand to increase. For example, Politico reports that readying pork products for sale is a ninth-month process, beginning with the birth of piglets.

According to The Guardian, farmers in California and Florida have been hit especially hard. In addition, dairy futures have nosedived — another blow to an industry that was already struggling due to tariffs thanks to a trade war with China.