6 of the 8 cases were exposed during international travel 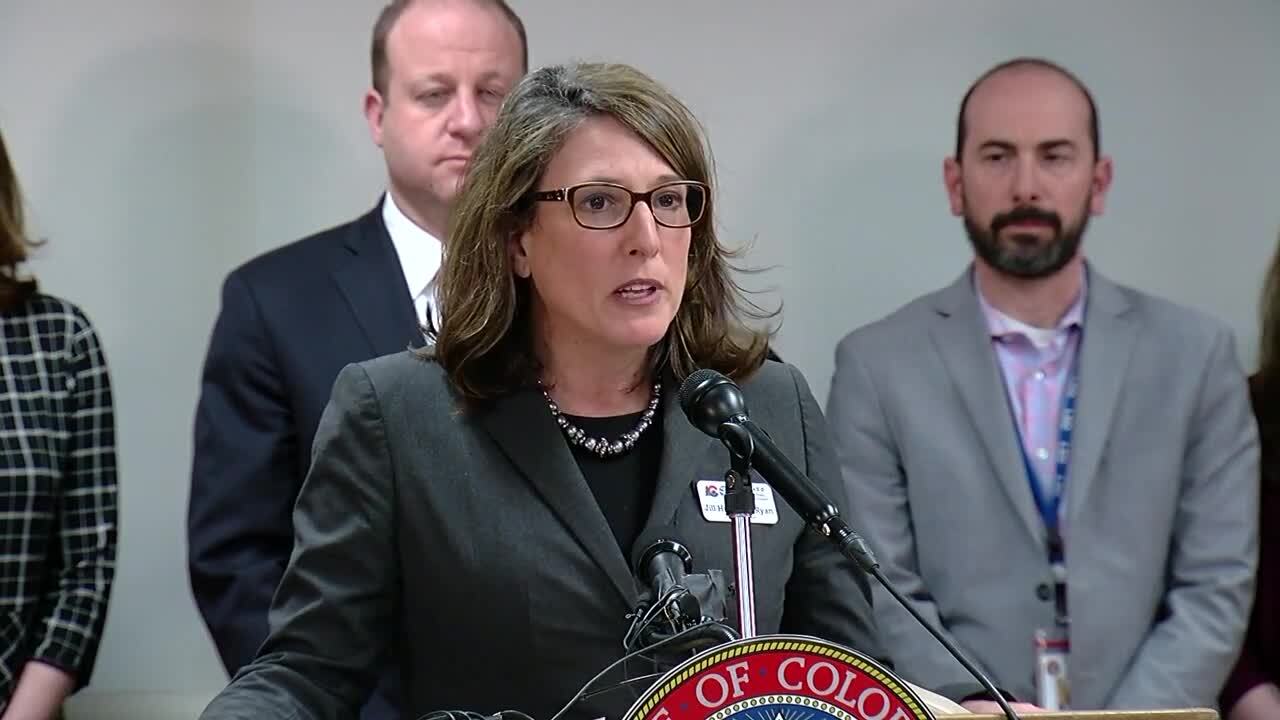 State officials announced two cases of the coronavirus in Colorado on Thursday. 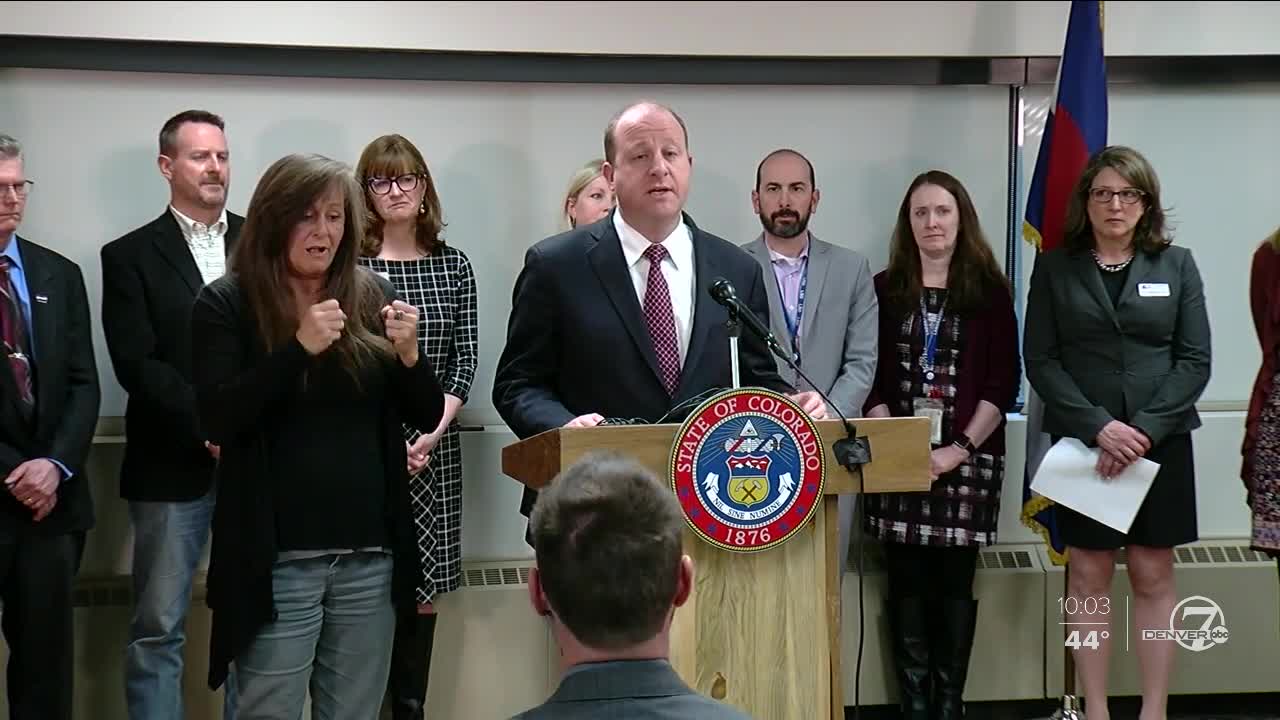 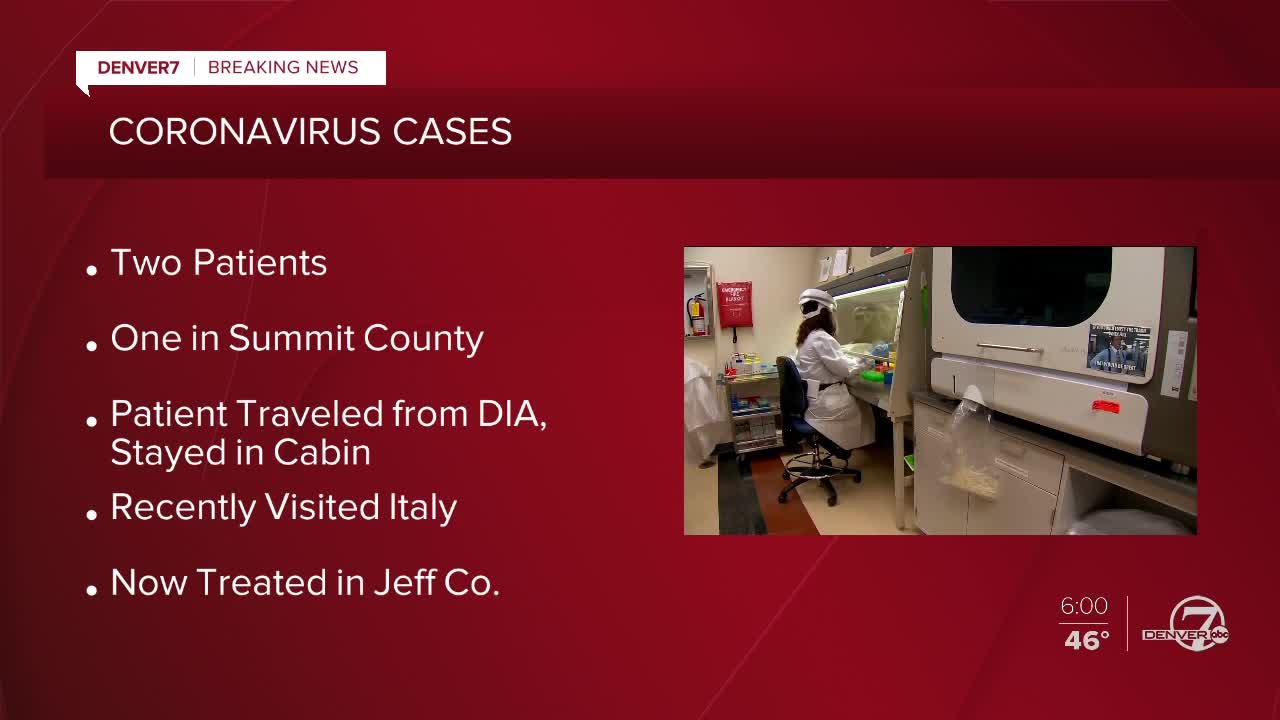 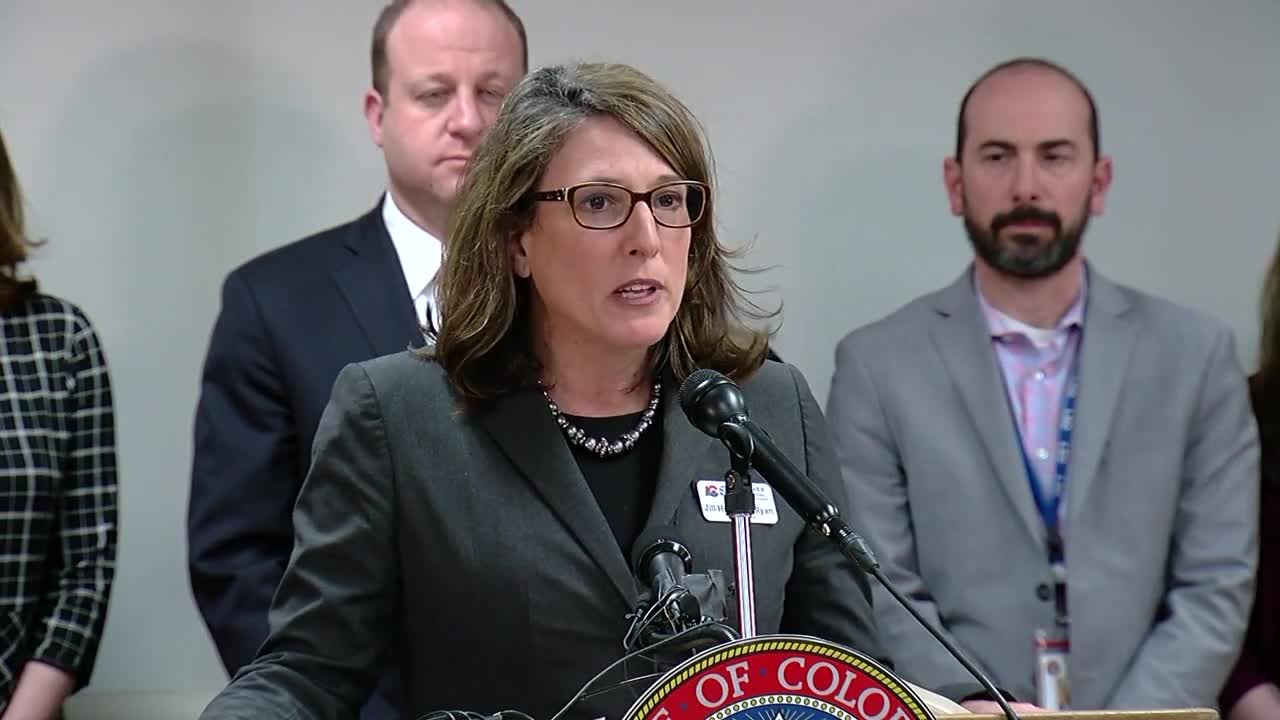 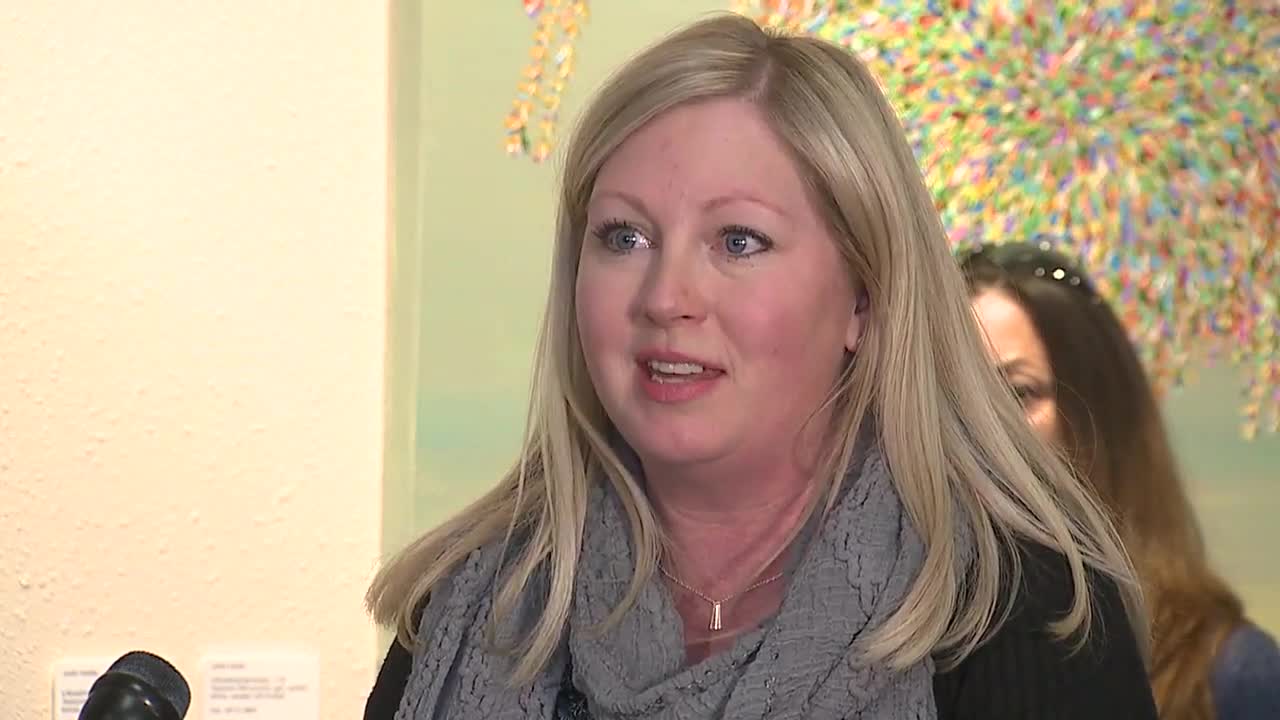 Editor's note: The number of cases of COVID-19 across the state continues to climb. Click here for the latest information.

The article below was our first official story of the novel coronavirus in the state of Colorado.

DENVER – Two people have tested positive for the novel coronavirus in Colorado, Governor Jared Polis announced Thursday, confirming the virus — which has been rapidly spreading across the world — had made it to our state.

The Colorado Department of Public Health and Environment (CDPHE) said Thursday a man in his 30s visiting Summit County tested “presumptive” positive for COVID-19. During a news conference Thursday afternoon, Polis said there was a second positive case of the new virus reported in Colorado. The two cases were not connected, Polis said.

A presumptive case means testing was done at the state level and will need to be verified by the Centers for Disease Control and Prevention. CDPHE officials said the state is acting on all "presumptive" cases as if they were confirmed, "because a quick response is essential to minimize the spread of the virus."

The man who was visiting Summit County had known exposure through close contact with the new virus outside of Colorado, state health officials said in news release Thursday afternoon.

He flew to Colorado on Feb. 29 and landed at Denver International Airport, where he rented a vehicle and drove to Summit County and skied at both Keystone and Vail Mountain Resort, according CDPHE officials.

The man spent time in Summit County and stayed at the Slopeside Condominiums in Keystone with his fiancée and two other Colorado residents, who are all under quarantine now. No guests have occupied the condo since the man became sick, Summit County officials said Friday. A cleaning worker was inside the condo about 23 hours after the man checked out and the worker's risk of contracting the virus is considered low, officials said.

According to the CDPHE, there is no risk of the worker passing on novel coronavirus infection by cleaning units after cleaning the infected man's unit since the worker was in the room more than two hours after the man.

At the time the man flew to DIA, he did not have symptoms, which made him a low risk for spreading the virus, Polis said during a news conference earlier Thursday.

On Tuesday, March 3, however, he developed symptoms and went to St. Anthony's hospital in Summit County, Polis said. The hospital on Wednesday then sent a sample from the man to a state lab, which received a positive result on Thursday.

The hospital recommended that the man get to a lower altitude, so he was allowed to travel in a private vehicle with his fiancée to Jefferson County, where he was quarantined and in recovery Thursday. He will remain in quarantine for at least 14-21 days, Polis said, or until health officials clear him. The man's fiancée was also placed in quarantine.

A DIA official said the airport was working with the CDPHE to verify the patient’s travel details, and added it will be up to the CDC to decide whether passengers on his flight would need to be notified of the presumptive case.

A spokesperson with Vail Resorts — which manages both Keystone and Vail Ski Resort, where the California man went to recreate — said in a statement they were aware of the case and had asked their employees to follow the recommendations from the CDC, but added they do not expect disruptions to any of their operations.

He "did not put many other people at risk"

Rachel Hurlihy, the Colorado state epidemiologist, said the patient's travel to Summit County "did not put many other people at risk" and that officials were working to contact anyone who may have had contact with him.

Four employees at the hospital were exposed to the man and they were being monitored Thursday.

"Like other states, we expected to begin seeing cases in Colorado and that is why we have been preparing for the past couple of months, in conjunction with local public health agencies and healthcare partners," said CDPHE executive director Jill Hunsaker Ryan. "Our goals are to protect the public from the disease, get people the care they need, and minimize disruption to daily lives."

Denver Public Health and Environment announced that two companions of a person who tested positive for coronavirus live in Denver and have agreed to a 14-day quarantine order. The two people will not be tested for coronavirus until they begin showing symptoms.

In a news release Thursday night, the Tri-County Health Department (TCHD) said the second "presumptive" positive case involved an older woman from Douglas County who was exposed to COVID-19 during an overseas cruise trip. The woman was currently quarantined at her home, per CDC guidelines.

Health officials there said the woman was isolated at home and had limited public contact, including with family members and healthcare providers. TCHD staff were currently monitoring people who may have been exposed, officials said.

Polis made the announcement of the first coronavirus case in the state just before 4 p.m. Thursday via Twitter.

In the news conference Thursday, he cautioned against panic.

"Coloradans get sick every day," Polis said. "I don't want anybody to panic because of this... We've been preparing for this moment. We are now in execution mode of this plan."

Everything you need to know about COVID-19 in Colorado, elsewhere

On Wednesday, the U.S. Department of Health and Human Services said it was providing $35 million to 28 states to help their public health departments respond to the outbreak and increase their surveillance for the virus, according to the Associated Press.

The CDPHE said the "vast majority" of COVID-19 cases will be mild. Across the nation, the more severe cases typically involved the elderly and people with health conditions.

Symptoms of COVID-19 include fever, cough and shortness of breath, and usually shows up two to 14 days after exposure, according to the CDC. Most people develop only mild symptoms. But some people, usually those with an underlying chronic disease, are under a greater risk of developing more severe symptoms, including pneumonia, which can be fatal. If you are healthy, there is no need to wear a face mask, health officials said.

Currently, there isn’t a vaccine to prevent COVID-19, though the Senate approved to allocate $7.8 billion to battle the coronavirus outbreak to speed up the development of vaccines and new medicines to battle the virus, pay for containment operations, and beef up preparedness. Polis said about $9 million of the plan would be for public health in Colorado.

President Trump was expected to sign the measure Thursday afternoon.

The death toll from the novel coronavirus in the U.S. climbed to 12 Thursday afternoon, with all but one of the victims reported in Washington state. The number of infected swelled to over 200 across 17 states around the country, the AP reported.

Worldwide, the virus has killed more than 3,300 people. Most of those deaths were in mainland China, where the virus is believed to have originated.

The CDC said the best way to prevent the virus is to avoid close contact with sick people, keep your hands away from your face, cover your mouth when you sneeze or cough, disinfect items you frequently touch, wash your hands often — essentially, what you would do during the flu season.

It’s important to note the difference between coronaviruses and COVID-19. Currently, there are many kinds of coronaviruses — like the common cold — in Colorado and beyond. On the other hand, this novel coronavirus, called COVID-19, is brand new. People have never been sick from this specific virus before. CDC said the actual virus is called SARS-CoV-2 and the disease it causes is called coronavirus disease 2019, also known as COVID-19.

COVID-19 was first detected in Wuhan City, Hubei Province in China in late January. It has since spread to almost 70 locations around the world, according to the CDC. John Hopkins University is tracking the international number of confirmed COVID-19 cases, deaths and recoveries, which can be seen here.

For the latest local, national and worldwide news on COVID-19, click here.